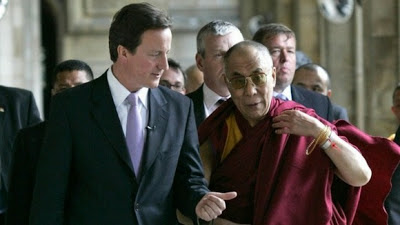 Everyone knows that China is an irritable country.
And if you irritate China there is a price.
This is what this blog on The People's Daily openly says.
Chinascope, the website which translated the posting into English, explains: "The People's Republic of China (PRC) often chooses economic retribution as a means to control other country's actions. An article written for a blog published on the website of The People's Daily demonstrates the essence of the Chinese regime's attitude and tactics. It reveals the PRC's hard reality more openly than in its mainstream publications."
One could ask: what if China irritates another country?
Take the example of the Chinese camping in the desolated Depsang Plains of Ladakh, India was really irritated.
Delhi kept its anger and did nothing; Premier Li Keqiang's visit was not even canceled.
Should have Delhi demanded some kind of gesture from China to obtain India’s 'forgiveness'?
It is not India's style.
The Chinese blogger explains that it is not easy to take an upright stance, without bowing, in front of today's God of Wealth (China), but can't concerned countries decide to jointly impose economic sanctions on Beijing (like the EU did for the 'dumped' Chinese solar panels); China which a surplus balanced trade with most the major world economies, may not be the winner at the end.
It is said that China may launch an anti-dumping and anti-subsidy probe in European (read French) wine in response to the European Union’s decision to impose duties on imports of Chinese solar panels. Let them try.
The United States are now bound to be irritated with China by the fact that Edward Snowden, already termed the ‘most consequential American whistleblower’, emerged in Hong Kong the day the after the Sunnylands Summit. Hog Kong is a Special Administrative Region of China.
The 29-year-old, working for a defence contractor under the CIA, told The Guardian: “I have no intention of hiding who I am because I know I have done nothing wrong."
Why did he choose Hong Kong? Because the city has: “a spirit of commitment to free speech and the right of political dissent,” he said.
Isn't it irritating for Washington?
In the meantime, the United States will continue to snoop on the rest or the world (as well as on its own citizens), while the Middle Kingdom will maintain its surveillance of each of its nationals and peep into the US servers whenever required for its ‘defence’.
All this is very irritating for the common man!
By the way, I did not understand this "new model for major country relationships" President Xi spoke about at Sunnylands.
Xi said that nations need to tread a new path, "different from the inevitable confrontation and conflict between major powers in the past”.
Presumably, this is of course if China is not angry!

The Outcome When Britain, France, and Germany Anger China
Blog from People’s Daily,
May 30, 2013
The French President came to China and brought a big package, a huge present, back to France with him. When the Chinese Prime Minister [Li Keqiang] went to Germany [for a visit], I believe Germany also received benefits. However, the United Kingdom is just able to watch on the sidelines.
In September of 2007, German Chancellor Angela Merkel met with the Dalai Lama. As a result, the PRC “retaliated” against Germany. This German offense started under Merkel. Of course China would get angry. Therefore China alienated Germany and got close to the British and the French, whereas the Germans had a hard time. Later Merkel learned her lesson. After winning her second election, she did not dare to meet with the Dalai Lama again. Since then, she has managed to maintain a fairly good relationship with China.
In December of 2008, French President Nicolas Sarkozy met with the Dalai Lama, setting a precedent in France. At the time, Sarkozy had a "double identity" [He was also the Chair of the E.U.], so it had a far worse impact. Coupled with the bad role he played before the Beijing Olympics, China’s revenge against France was much more violent.
Then China gave sweetness to the British and the Germans and let France suffer. In the end, France was forced to give in and issued a joint declaration with China. Until then, China maintained distance from France. Interestingly, later Sarkozy repeatedly tried to appease China, but he still stepped down when his time was up.
In May of 2012, British Prime Minister David Cameron met with the Dalai Lama. This time it was Britain’s turn to suffer. Meanwhile, France and Germany got the sweet treatment [from China]. Although Cameron is not the first British leader [to meet the Dalai Lama], a year later, Cameron still cannot make the trip to visit China that he has always wanted to make.
According to the British media, Britain will lose billions of pounds of China’s investment in Britain because of it [his meeting the Dalai Lama]. Should he refuse to admit his mistake and save face or should he get the all-important money? This really is a question for the British.
Although the British seemingly do not want to bow, the outcome is likely the same as Germany and France, making some kind of gesture to obtain China’s "forgiveness."
China has identified the disunity between the EU countries, in particular Germany, France, and the UK, thus [effectively] enabling the imposition of such an economically divisive tool.
In the front of today's God of Wealth–China, it is not so easy for the former British Empire to insist on an upright stance without bowing.
Posted by Claude Arpi at 7:23 AM