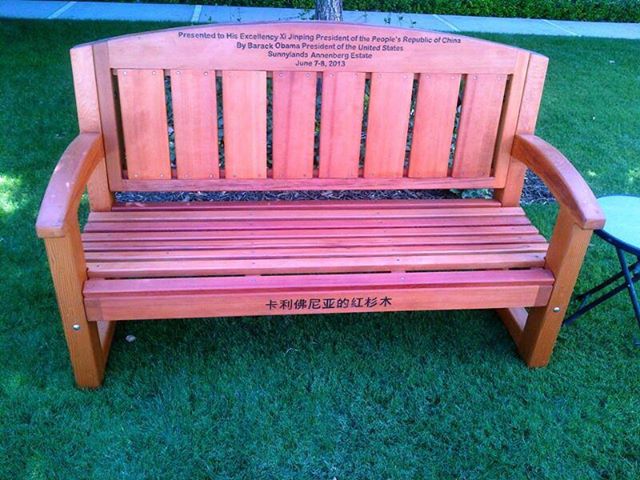 Was it a Great Master coup by President Xi?
A few weeks ago, US President Barack Obama and President Xi Jinping of China decided to meet for a week-end at a luxurious desert estate known as Sunnylands in southern California.
The atmosphere of the first official encounter between the new Chinese President and his American counterpart was to be as ‘relaxed’ as possible: no stiff protocol, no long speeches, no ties, not even a formal agenda.
More than the North Korea or South and East China Seas dispute, Obama had in mind the Chinese hackers visiting the Pentagon’s and other US government Internet servers and taking away American military secrets. This was a major irritant for the United States and Obama was keen to corner Xi on the subject.
As he entered Sunnylands, Xi knew that the stakes were vastly different from the previous day.
Welcoming his counterpart, Obama reiterated the importance of the relationship which was “reflected with this somewhat unusual setting that we are hosting the President [Xi] in”. Obama spoke of sharing the “visions for our respective countries” and how a new model of cooperation between countries based on mutual interest and mutual respect could be forged (it sounds panchsheelian).
In his opening remarks Xi denied any wrong doing from China. But when he said that the cybersecurity issue needed to be resolved in a ‘pragmatic way’, as China was also a victim of cyber attacks; he was probably smiling to himself.
The Guardian had just reported that the US National Security Agency (NSA) had obtained direct access to the systems of Google, Facebook, Apple and other US internet giants. The British newspaper quoted from a top secret document demonstrating that the NSA had been using a previously undisclosed programme called PRISM, allowing US officials to collect personal information including search history, content of emails, file transfers and live chats.
Suddenly, it was the pot calling the kettle black.
The Guardian had verified the authenticity of a 41-slide top secret PowerPoint presentation, which was not to be shown to foreign allies.
According to the new revelations, PRISM is able to directly collect information from the servers of most major US service providers.
Earlier in the week, The Guardian had already leaked of a top-secret court order compelling telecoms provider Verizon to turn over the telephone records of millions of US customers.
The US companies’ denial is similar to Beijing rebuffing the fact that there are active hackers in China.
President Barack Obama had suddenly to staunchly defend his government’s surveillance over his countrymen's phone and internet activities. He called it a ‘modest encroachment on privacy’, necessary to defend the United States from outside attack. And he differentiated surveillance and espionage!
We shall never know if Xi told Obama: “please look in your backyard before pointing a finger at us”; but the fact remains that the Chinese President had won the battle. Obama could not lecture him anymore on the human rights and liberties, so dear to the American people.
Another serious question emerges from the revelations about PRISM: could the famous Chinese hackers be for something in the ‘timely’ disclosure?
Guess where Edward Snowden, already termed the ‘most consequential American whistleblower’ emerged day the after the Sunnylands Summit? In Hong Kong, the Special Administrative Region of China!
The 29-year-old working for a defence contractor under the CIA told The Guardian: “I have no intention of hiding who I am because I know I have done nothing wrong."
Strangely, he was staying at an unnamed ‘plush hotel’ in the former British colony. Why did he choose Hong Kong? Because the city has: “a spirit of commitment to free speech and the right of political dissent,” he said.
Could Hong Kong be a good place for Snowden to get ‘protection’ from Beijing if needed be? The future will tell us.
In the meantime, the United States will continue to snoop on the rest or the world (as well as on its own citizens), while the Middle Kingdom will maintain its surveillance of each of its nationals and peep into the US servers whenever required for its ‘defence’.
President Xi Jinping can be happy, Barack Obama repeated his favorite formula for foreign politics (in internal politics, Xi speaks of a ‘Chinese Dream’): a "new model for major country relationships"
Xi said that both sides need a new path, "different from the inevitable confrontation and conflict between major powers in the past”.
Well, where is India in this scheme?
Did Dr. Manmohan Singh take up the issue of cybersecurity when Premier Li Keqiang visited Delhi? Will the ‘honest’ Defence Minister broach the topic during his forthcoming trip to Beijing?
Of course, not! China is a friend and a strategic partner; Beijing may bother us in Ladakh, but it would never do this in the cyberspace!
In any case, the National Technical Research Organisation (NTRO) is watching! Unfortunately, there is another side to it, the Indian agencies are also watching Indian citizens.
The International NGO Human Rights Watch said that the new Central Monitoring System (CMS) recently introduced by Delhi ‘was chilling, given its reckless and irresponsible use of the sedition and Internet laws” in India.
It seems that the system has the capacity to provide government agencies like the National Investigation Agency or the IB, centralised access to the country’s telecom network and monitor phone calls, text messages, and Internet messages bypassing service providers.
Earlier, when my website site was hacked, I could without hesitation point a finger at the Dark Visitors from China, now I will have a choice on who to blame.
India, however, remains far behind the US and China in the Great Snooping Game and as far as external threats are concerned, India needs to work harder, much harder.
Posted by Claude Arpi at 6:52 AM

Dear Mr Arpi, I thought that you would find this recent Australian interview with the Dalai Lama. http://www.abc.net.au/7.30/content/2013/s3781436.htm