Mao and the Atom Bomb 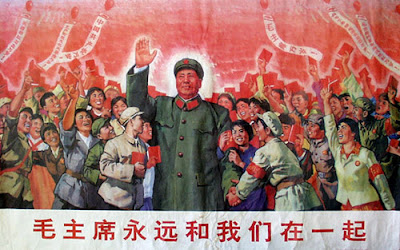 New Tang Dynasty Television, the Falun Gong group TV channel reported that, during the last Chinese New Year, CCTV-9, the Chinese documentary channel broadcast a program based on declassified China-Russia historical files.
Apparently one episode showed Mao’s famous 1957 speech in which he boasted that he had no fear of nuclear war nor how many of the world’s people would be killed, including in China.
What is less known is that Mao said the same thing to Jawaharlal Nehru, the Indian Prime Minister when the latter visited China in October 1954.
Several years ago, I wrote:

Mao then came to the second and main part of his argument which will remain in the history: his description of the atom bomb as a ‘paper tiger’.
For him, the US thought they were strong because of their superiority in three sorts of weaponry: 'artillery, navy and bomb'. But, for the Chinese leader there was no basic differences with the ‘olden days’, the weapons might become more and more sophisticated, but the outcome would remain the same. He told Nehru:


In olden days they used 'cold weapons' (i.e., knives, swords etc). Now hot weapons (rifles, guns etc.) are used. Cold ones kill less people and hot ones kill more people; atomic weapons will kill still more people. But besides increasing the rate of mortality they make no difference. In a third world war, many more people would be killed.

That is not all!
Dr. Li, in his Private Life of Chairman Mao, wrote that a few years later, Mao recalled his meeting with Nehru. He then realized  the meaning of Mao’s words about the atomic bomb:


... it was so hard to accept, how willing Mao was to sacrifice his own citizens in order to achieve his goals. I had known as early as October 1954, from a meeting with India’s prime minister Jawaharlal Nehru, that Mao considered the atom bomb a “paper tiger” and that he was willing that China lose millions of people in order to emerge victorious against so-called imperialists. “the atom bomb is nothing to be afraid of,” Mao told Nehru.
China has many people. They cannot be bombed out of existence. If someone else can drop an atomic bomb, I can too. The death of ten or twenty million people is nothing to be afraid of.
Nehru had some strong reservations. First of all, for him, “even without war, India would have attained freedom.” He thought that in fact India would have been freed earlier without the war.

Dr. Li added: “In 1957, in a speech in Moscow, Mao said he was willing to lose 300 millions people - half of China population. Even if China lost half its population, Mao said, the country would suffer no great loss. We could produce more people.”Nehru's second point was that though the US had won the war, they were still unhappy. He could therefore not accept Mao's argument; he had told him that though a war was bad and therefore should be avoided, still if it comes, one should welcomed it.
Nehru believed  that a third World War would be qualitatively different from the two earlier conflicts. Though the Americans thought that they could destroy the administrative, strategic and industrial centres of the USSR, in return, the Soviets would certainly not keep quiet. American centres would be destroyed and it would trigger an uncontrollable chain reaction.
For Nehru, the hydrogen bomb releases energy which itself creates another energy which wants to kill; none would be able to control the chain of reaction. For the Indian Prime Minister, the industrialized countries would eventually be destroyed.
Mao agreed that there was a disagreement between them on this point.
He told Nehru that his analysis about the US having benefited [of Hiroshima] and still having difficulties [being unhappy] was very good.
He also accepted his argument of the qualitatively difference in weapons, though “victory or defeat hinges on the scope of destruction suffered”.
Dr. S. Gopal said that after his meetings with Mao, Nehru minuted in a small note on the file, that this record was not always accurate.
Sometimes the Indian version (mainly his comments on the atom bomb) did not tally with what Mao said later.

In any case, the 1957 version of Mao's speech tallies perfectly with what Dr. Li reported from that Mao-Nehru encounter in October 1954.

Mao’s ‘Nuclear Mass Extinction Speech’ Aired on Chinese TV
Li Jian
New Tang Dynasty Television
March 5, 2013
During the Chinese New Year, the Chinese regime’s documentary channel, CCTV-9, ran a series on declassified China-Russia foreign affair files dating back to the Mao Zedong era. One episode showed Mao’s never-before-aired famous 1957 speech in which he boasted that he had no fear of nuclear war nor how many of the world’s people would be killed, including in China.
Cheng Ming Magazine in Hong Kong reported that the negative impact of the documentary would likely have severely downgraded Mao’s image among Chinese viewers.
With two episodes broadcast nightly for a week, the 18-episode documentary presented historical events previously unknown to the public, including the relationship between China and the former Soviet Union after 1949, and details of the Korean War, and the Taiwan Strait wars.
It also revealed Mao’s relationship with Joseph Stalin and Nikita Khrushchev, his successor, exposing many instances of mutual scheming, betrayal, political blackmailing and extortion through witness testimonies from Rong Zhi, who worked at the Soviet Embassy in China, and Shi Zhe, the daughter of Mao’s early Russian interpreter.
Chinese history experts on the Cold War, such as Shen Zhihua, Yang Kuisong, and Li Haiwen, provided the latest historical interpretations.
An episode titled “The One Above All” showed footage of Mao speaking at the World Communist Representative Meeting in Moscow in November 1957, giving his famous speech, “American Imperialism Is a Paper Tiger.”
Mao’s exact words were: “I’m not afraid of nuclear war. There are 2.7 billion people in the world; it doesn’t matter if some are killed. China has a population of 600 million; even if half of them are killed, there are still 300 million people left. I’m not afraid of anyone.”
Although this famous quote has been passed around among ordinary Chinese, there are still many who have refused to believe it.
Some media pointed out that now the Communist Party’s television station has confirmed that Mao actually said it, that makes it an undeniable fact. Leftists and Maoists can no longer say that Mao and the Party put the wellbeing of people above all else, they said.
Posted by Claude Arpi at 6:58 AM