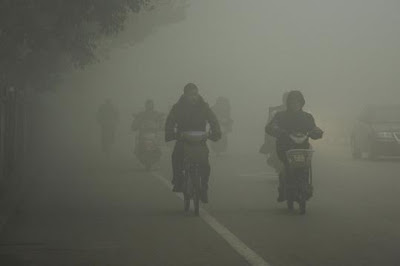 Before the 2008 Beijing Olympics, Ji Lin was chairman of Chinese capital top advisory body, the Beijing Committee of the Chinese People's Political Consultative Conference.
He now says that the Chinese capital is today doing far more than it did few years ago to ensure that Beijingers enjoy a blue sky.
Ji affirmed: "We went all out to improve the environment and had 'truly exceptional Games' in 2008, ...now we are addressing air pollution on a larger scale and with more investment than was possible when we prepared for the Games."
But with little results.The China Daily wrote: "In addition to capping coal consumption in Beijing, the city is seeking to get neighboring Tianjin, Hebei and Shanxi to rally behind the fight against pollution."
However a Chinese ministry report shows smog caused 1.1 trillion yuan (about 180 billion US $) in losses in 2010, though the study does not include damage to people's health and deaths.
The South China Morning Post also writes on the hot topic: "The mainland is paying an increasingly heavy price for rampant pollution, with direct economic losses more than doubling between 2004 and 2010, a recent government-backed study has found."
An estimate prepared by the Netherlands Environmental Assessment Agency (MNP), using published BP (British Petroleum) energy data and cement production data believed that during the the 1990-2006 period, global fossil-fuel related CO2 emissions increased over 35%.
It says: "In 2006 global CO2 emissions from fossil fuel use increased by about 2.6%, which is less than the 3.3% increase in 2005. The 2.6% increase is mainly due to a 4.5% increase in global coal consumption, of which China contributed more than two-third. China’s 2006 CO2 emissions surpassed those of the USA by 8%. This includes CO2 emissions from industrial processes (cement production). With this, China tops the list of CO2 emitting countries for the first time. In 2005, CO2 emissions of China were still 2% below those of the USA."
That was in 2006.
Today according to the data collected by the United States Department of Energy's Carbon Dioxide Information Analysis Center (CDIAC) for the United Nations, China has produced 23.5% of the world CO2 in 2012; the USA comes second with 18.27%, the EU third with  13.98% and  India, fourth with 'only' 5.83%.
Another interesting study has been published in China.
It affirms that "about 90 per cent of glaciers in Tibet called the Third Pole region are shrinking because of black carbon pollution 'transferred from South Asia' to the Tibetan Plateau".
Yao Tandong, director of the Chinese Academy of Sciences' Institute of Tibetan Plateau Research claims that the ongoing research over more than 30 years has given scientists a better understanding of pollution on the Tibetan Plateau.
According to him, black carbon generated from industrial production in South Asia is being taken to the Tibetan Plateau by the Indian monsoon in spring and summer.
The China Daily quoted him saying: "The accumulation of black carbon on the plateau will accelerate the shrinking of glaciers, bringing with it persistent organic pollutants that will be deposited in the soil".
The investigation using topographic maps and satellite images revealed the retreat of 82 glaciers, area reduction by 7,090 glaciers and the mass-balance change of 15 glaciers, and for  Yao: "Systematic differences in glacier status are apparent from region to region, with the most pronounced shrinkage in the Himalayas, the south eastern part of the region. Some of the glaciers there are very likely to disappear by 2030 ...The shrinkage generally decreases from the Himalayas to the continental interior and is smallest in the western part. Some glaciers there are even growing."
Whether is assessment is correct or not will have to be checked by Indian scientists. The fact remains that China has huge problems in its metropolises.
It is high time to start calculating the true growth of a country which should include 'green' parameters and the damage caused to environment.
We will then discover that old Europe is perhaps not in such a bad shape.

1.1 tr yuan in economic losses from pollution in 2010, China report says
South China Morning Post
March 28,  2013
Li Jing
Ministry's report shows smog caused 1.1tr yuan in losses in 2010, but incomplete study does not include damage to people's health and deaths
The mainland is paying an increasingly heavy price for rampant pollution, with direct economic losses more than doubling between 2004 and 2010, a recent government-backed study has found.
An incomplete calculation of the environmental costs in 2010 showed that pollution had caused 1.1 trillion yuan (HK$1.36 trillion) in economic losses, or 2.15 times the 511.8 billion yuan loss in 2004, when the "green GDP" project was launched.
The direct cost of pollution accounted for 2.5 per cent of total economic output in 2010, but if damage to the ecosystem - including forests, wetlands and grasslands - was included, the losses added up to 1.54 trillion yuan, or 3.5 per cent of that year's gross domestic product.
The cost of pollution also grew more rapidly than GDP in 2010, up 13.7 per cent compared with GDP growth of 10.4 per cent.
The latest update of the study, led by the Ministry of Environmental Protection's Chinese Academy of Environmental Planning, was quietly posted on the academy's website in January, when about a seventh of the mainland was shrouded in smog. It said the findings were incomplete due to lack of data in some areas.
Aimed at putting a price tag on the mainland's runaway economic growth, the study has been stubbornly resisted by local governments because the findings could tarnish their political achievements. As a result, the academy had only previously released figures for 2004 and 2008, even though the study is conducted annually.
"The existing accounting system fails to reflect the true cost of resources consumption and environmental degradation, as a result the country's economic achievement has been over exaggerated," the academy said in a summary of the findings for 2010 that was posted on its website.
Government campaigns targeting major air and water pollutants since 2006 were not able to reverse the trend of rising environmental costs, it said.
A total of 558.9 billion yuan would have been needed to clean up pollution in 2010, an increase of 94 per cent from the 287.4 billion yuan needed in 2004, the study said.
The research does not calculate the health costs associated with pollution, but they would push the economic losses even higher.
A government-sponsored report released in 2006 said air pollution caused 358,000 premature deaths in 600 mainland cities each year, with an estimated health cost of 152.7 billion yuan.
The World Bank estimated in 2007 that the health costs of air and water pollution equalled 4.3 per cent of the mainland's GDP.
Premier Li Keqiang has pledged that the country will not pursue economic growth at the expense of the environment, saying "such growth won't satisfy the people", but has yet to release details of his planned remedy.
Professor Li Wei, from Beijing Normal University, said the "green GDP" project's findings should serve as a wake-up call for local governments and officials, and prompt them to reconsider their economic growth targets.
China Environmental News, the ministry's daily, said on Tuesday that the project might have regained momentum.
Posted by Claude Arpi at 1:31 PM