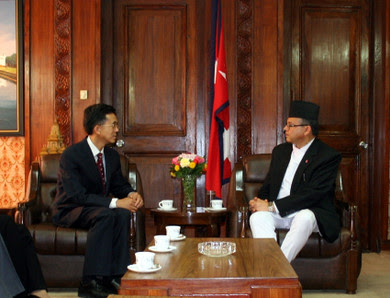 The Chinese are slowly invading Nepal.
A Nepali anaylsyt told AFP "In Tibet, unrest has significantly increased, so Chinese investment in Nepal should be understood in the context of China's integrity, which is very important for the giant nation."
He added: "Some Indian analysts repeatedly warn that China has built these ports to prepare for a war with India, it will definitely provide China with an edge but at heart, its goal is to expand the economic opportunity to its workforce and make them loyal to the state."
From Mao's time, the Chinese have always spoken of dual use for infrastructure. In Tibet's Nyingchi prefecture  for example, infrastructure has tremendously been developed, with the first objective to accommodate more than 1 million tourists every year. But the same infrastructure can be used in case of conflict with India (Nyingchi is just north of the McMahon Line).
Ditto in Nepal which is fast invaded by China.
In this context, it is interesting to mention an article published by The Hindustan Times on November 11, 1950. The title is "Sardar Patel Exhorts people to stand unitedly to see conditions in Tibet and Nepal and defend their country".
The article quotes Patel in one of his last speech (probably the last in Delhi). His conclusion was "In this kalyug we shall return ahimsa for ahimsa. But if anybody resorted to force against us we shall meet it with force."


Sardar Patel said in Delhi that the present or potential dangers arising from what was happening in Tibet and Nepal made it incumbent on the people to rise above party squabbles and unitedly defend their newly-won freedom. The path shown by Mahatma Gandhi and Swami Dayanand, he added, would help the people to tide over these none too easy times. Sardar Patel was addressing a meeting organized by the Central Aryan Association to commemorate the 67th death anniversary of Swami Dayanand Saraswati, social reformer and thinker. Referring to the recent developments in Nepal, Sardar Patel said: "In this country, our near neighbour, the Raja has sought sanctuary in the Indian Embassy. How could we refuse to give him refuge? We had to give it. Those who are wielding real power today in Nepal do not accept the Raja as the head of the State. They have installed the Raja's three-year-old grandson on the gaddi. They want us to accept this position. How can we do so?" Sardar Patel emphasized that the "internal feud" in Nepal had laid India's frontiers in the north wide open to outside dangers. It was imperative, therefore, for Indians to be well prepared to meet any challenge that might come from any quarter. Sardar Patel criticized Chinese intervention in Tibet and said that to use the `sword' against the traditionally peace-loving Tibetan people was unjustified. No other country in the world was as peace-loving as Tibet. India did not believe, therefore, that the Chinese Government would actually use force in settling the Tibetan question. "The Chinese Government," he said, "did not follow India's advice to settle the Tibetan issue peacefully. They marched their armies into Tibet and explained this action by talking of foreign interests intriguing in Tibet against China. But this fear is unfounded: no outsider is interested in Tibet. India made this very plain to the Chinese Government. If the Chinese Government had taken India's advice, resort to arms would have been avoided." Continuing, Sardar Patel said that nobody could say what the outcome of Chinese action would be. But the use of force ultimately created more fear and tension. It was possible that when a country got drunk with its own military strength and power, it did not think calmly over all issues. But use of arms was wrong. In the present state of the world, such events might easily touch off a new world war, which would mean disaster for mankind. In these difficult times, Sardar Patel said, the duty of the Indian people lay not in fleeing from trouble but facing it boldly. That was the real
message of both Swami Dayanand and Mahatma Gandhi. "Do not let cowardice cripple you. Do not run away from danger. The three-year-old freedom of the country has to be fully protected. India today is surrounded by all sorts of dangers and it is for the people today to remember the teachings of the two great saints and face fearlessly all dangers." The Deputy Prime Minister continuing declared: "In this kalyug we shall return ahimsa for ahimsa. But if anybody resorted to force against us we shall meet it with force."


The Chinese continue to advance. But now, they say that they want to do business with India.

China eyes India trade by boosting spending in Nepal
Deepak Adhikari (AFP)
March 10, 2013
KATHMANDU — China's ambassador to Kathmandu was recently pictured in a traditional Nepali cap and silk scarf, digging with a spade to symbolise the laying of the foundations of a new dry port near the Tibet border.
The photo opportunity marked the latest in a series of major projects that underscore China's growing economic influence in Nepal, where it is building roads and investing billions of dollars in hydropower and telecommunications.
Other Chinese projects in its impoverished, electricity-starved Himalayan neighbour include a $1.6 billion hydropower plant which is expected finally to end power outages which extend to 14 hours a day in winter.
Meanwhile China recently completed a 22-kilometre (14-mile) stretch of road in central Nepal connecting the country's southern plains with the Tibetan county of Kyirong, to form the shortest motorable overland route between China and India.
Analysts have questioned whether Beijing's largesse is a gesture to a neighbour in need, or the result of a foreign policy which increasingly sees Nepal's roads and dry ports as a doorway to the huge markets of India.
"I am sure that these infrastructure projects will help win influence in Nepal but they will serve a dual purpose," said Purna Basnet, a Nepalese political commentator who frequently writes on Chinese influence in Nepal.
"It will be easier for China to supply goods to India via Nepal. There is even a talk of connecting Kathmandu with their rail networks in Tibet.
"The Shigatse-Lhasa railway will be completed in a couple of years. From Shigatse, they have plans to connect Kathmandu through railways."
Nepal has always been in the shadow of its southern neighbour India, which has traditionally exerted huge political influence and is Kathmandu's biggest trading partner and sole provider of fuel.
Since the end of a bloody decade-long civil war in 2006 and the emergence of the Maoist rebels who fought the state as the largest political party, China has been gradually -- and literally -- making inroads as a counterweight to India.
Chinese ambassador Yang Houlan outlined his country's vision of Kathmandu as a trade gateway to New Delhi in a recent op-ed article in Nepal's English-language Republica newspaper.
"From an economic viewpoint, Nepal links China (with 1.3 billion people) with South Asia (with 1.5 billion). The huge common market provides great opportunities for both China and South Asia," he wrote.
"China is pushing its ?Develop West' strategy, and South Asia represents one of the main overseas investment opportunities. Nepal could provide China the much-needed overland channel to South Asia."
China's commitment to Nepal is outlined by its construction of a further five dry ports in the Himalayan region where the treacherous terrain marks the 1,414-kilometre long border.
It has also offered to fund an international airport in the tourist hub of Pokhara.
On top of infrastructure development, around two dozen Chinese companies have invested $100 million in housing, hotels, restaurants and other areas of tourism in Nepal.
By the end of 2013 annual trade between the two countries is expected to hit $1.5 billion, a 25-percent rise on an annual basis.
But it's not just about getting rich, say many observers who see China's investment in Nepal as a vital part of its strategy for quelling unrest in a country of 55 ethnic groups where poverty remains a major threat to security.
"In Tibet, unrest has significantly increased, so Chinese investment in Nepal should be understood in the context of China's integrity, which is very important for the giant nation," said Kathmandu-based strategic affairs analyst Lekhnath Paudel.
"Some Indian analysts repeatedly warn that China has built these ports to prepare for a war with India," he added.
"It will definitely provide China with an edge but at heart, its goal is to expand the economic opportunity to its workforce and make them loyal to the state."
Posted by Claude Arpi at 7:23 AM