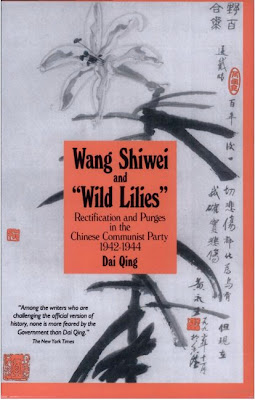 The South China Morning Post says that a senior PLA general warned his countrymen that corruption could ruin the PLA (and China).
It may be true.
General Liu Yazhou, a political commissar at the National Defence University is however wrong when he refers to "the PLA's honesty and efficiency in their peak in Yanan, Shaanxi under the leadership of Mao Zedong in the 1940s, which helped them win public support and finally defeat the then-ruling Kuomintang to set up the communist regime in 1949."
Dissidence and corruption was not something unknown in the early days of Communist China.
It was already present at the end of the Long March when the great revolutionary leaders lead by Mao Zedong settled in the caves of Yanan.
At that time, a writer, Wang Shiwei, published a very strong attack on the party leadership accusing the leaders of living a good life even as they preached asceticism and egalitarianism.
But who was Wang Shiwei? Wikipedia informs us:


Wang Shiwei (March 12, 1906-July 1, 1947) was a Chinese journalist and literary writer. He became famous for his contribution to the Chinese history of modern revolution and to Chinese modern literature. Wang joined the Communist Party of China in 1926, but later wrote critically of some aspects of the revolution. Under order from Mao Zedong, he was expelled from the party, and executed in 1947.
From 1930 onwards he started to use other pen names, still pronounced "Shiwei" but using different characters. His novella Xiuxi (休息, meaning "rest"), talked about how young people should fight against the darkness of a country and was published in Xu Zhimo's "New Literary Collection" in 1930. His work outlined an "ideal society" where equality of opportunity was emphasized; he also incorporated some Marxist thought.

In his book Wild Lilies, Wang described the top leaders’ life: dancing at night while the common men had a very hard life struggling against the Japanese invaders.
At that time, the party in Yanan, as later in Beijing, would not accept any dissident nor even being told of any wrong.
According to Wikipedia:


By 1942, Wang was working for the Liberation Daily where he wrote the essay Wild Lilies criticizing Mao Zedong's taste for beautiful women, as well as what he called the unjustified privileges enjoyed by members of the Communist Party. It discussed the 'ugliness and indifference' of Yan'an; also criticizing some 'big men' in the CCP whom Wang thought were responsible for the 'growth of darkness' in China.
The article caused him many woes. Mao's Talks at the Yan'an Forum in May laid down the official line, demanding that art serve politics. On 27 May 1942, the Central Committee held a seminar to discuss whether Wang was guilty. On 23 October, under the orders of Mao, Wang was expelled from the Communist Party on the charge that he was one of the 'Five Member Anti-Party Gang' of Trotskyites who were alleged to have sought to take over the Chinese Communist Party, and that he was disrupting party unity.
Wang's defence was that he was not involved in any Trotskyist activities, except for helping his friends Wang Wenyuan and Chen Qingchen to translate two prose pieces in Autobiography of Leon Trotsky activities which he had already informed the Party of.
Wang's 'trial', which took the form of a series of struggle sessions, ended in June 1942 with Wang being found guilty and put under arrest.
Five years later, with Yan'an under Kuomintang attack and the Communists in retreat, Mao decided Wang should die. On July 1, 1947, on the direct orders of Mao which were confirmed by the Social Section of the Communist Party in Shanxi-Suiyuan, Wang was reportedly chopped to pieces and his remains were thrown down a dry well.

At the end of the fifties, Mao began the campaign “Let the Hundred-Flowers Bloom, Let the Hundred Thoughts Flourish”. It was a treacherous way to get rid of all the dissidents at once. In asking the intellectuals to criticize the Party, Mao was able to ‘unmask’ tens of thousands of ‘intellectuals’. Once ‘unmasked’, they were ‘rectified’ during ‘anti-rightist’ campaigns.
For Mao, the strategist, the conclusion was: “In the beginning, people didn’t know who the rightists were or what they looked like, and it was hard for us to explain, but now we can identify them clearly.”
The new leadership in Beijing likes to speak about today's corruption, but nothing is new in the Middle Kingdom.
Hopefully, the present leaders are less ruthless and more devoted to the masses. It is at least what one can hope.

Corruption will ruin the PLA, warns general
Saturday, 16 March, 2013, 12:00am
South China Morning Post
Minnie Chan in Beijing
Article seen as call by hawkish leader for army to continue with its anti-graft drive
The combat effectiveness of the People's Liberation Army will be ruined if military leaders become obsessed with materialism, a hawkish PLA general warned.
"Our country has a dream to be a strong nation, while the army also dreams to be a powerful force … It's an iron rule that valiant warriors come from highly disciplined troops," wrote General Liu Yazhou, a political commissar for the National Defence University, in a commentary on the party mouthpiece the People's Daily yesterday.
"The most challenging thing to an army or a political party is how to keep vigilant in peace time, because corruption and enjoyment would erode our fine working style and revolutionary tradition," Liu wrote, referring to the PLA's honesty and efficiency in their peak in Yanan, Shaanxi under the leadership of Mao Zedong in the 1940s, which helped them win public support and finally defeat the then-ruling Kuomintang to set up the communist regime in 1949.
"For a time … some individual leaders lost their minds and obsessed in a dissipated life, seeking personal profit and other corruption that brought great harm to our army," Liu wrote.
Liu's criticism could be seen as an apparent reference to the disgraced Gu Junshan, a former deputy head of the army's General Logistics Department, who was taken into custody in January and put under investigation on suspicion of taking bribes.
In his article, Liu also highlighted the importance of the anti-corruption drive launched within the army and party in November by President Xi Jinping, who is also party head and chairman of the PLA's top brass, the Central Military Commission.
"Liu's article sends a strong signal to the army that it should continue its massive anti-graft drive, as it indicated that the CMC believed that even the army has lost its fighting spirit," said Ni Lexiong, director of the sea power and defence policy research institute at Shanghai University of Political Science and Law.
"Xi has called the army to meet the goal of 'being prepared for real combat and for victory' because he wanted to use a big vision such as that to rebuild the PLA's morality and soul."
He said that immoral spirits would not only ruin an army, but also cause a political regime to collapse.
Posted by Claude Arpi at 4:16 PM