Why not a Water Treaty with China? 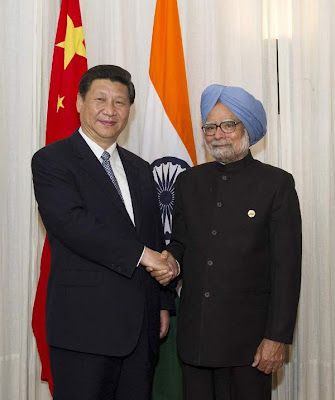 The Press Trust of India (PTI) reported that Prime Minister Manmohan Singh has asked the Chinese President Xi Jinping to set up a joint mechanism with India to assess the construction work on dams on Brahmaputra river in Tibet.
PTI wrote: "Notwithstanding pledges to take the bilateral relationship to a new level, Prime Minister Manmohan Singh in his first meeting with new Chinese President Xi Jinping has sought a joint mechanism to assess the construction work on dams on Brahmaputra river in Tibet."
The Prime Minister told journalists traveling with him in the plane : "I took the opportunity to raise the issue of trans-border river systems. I requested the Chinese government to provide a joint mechanism to enable us to assess the type of construction activity that is going on in the Tibetan Autonomous Region (TAR)."
Apparently, President Xi assured Dr. Singh that China was quite conscious of its responsibilities and 'the interest of the lower riparian countries'.
PTI added: "As regards the specific mechanism that he had asked, the Chinese President told him that they would further look into it."
One could ask, why just a 'joint mechanism' and not a Treaty in the lines of the Indus Waters Treaty signed in 1960 with Pakistan.
And what about the Sutlej and the Indus?
The Prime Minister justified his shyness: "But as of now, our assessment is that whatever activity that is taking place on the Brahmaputra region in Tibet, it is essentially run-of-the-river projects and therefore there is no cause of worry on our part."
The only solution lies in bringing the matter to the negotiating table and reach a bilateral (or multilateral) water agreement. If a river-water Treaty could be signed between India and Pakistan, why can not a similar agreement be made between China, India, Bhutan and Bangladesh, in order to assure a decent life for all in the region?
Further there is Convention on the Law of the Non-Navigational Uses of International Watercourses adopted by the UN in 1997 (though not yet an international law, because not ratified by enough nations). It could serve as a model for bilateral or multilateral treaties/conventions with China.
But is Beijing interested?
The fruition of the projected mega-projects will entirely depend on the new leadership in China. If he is wise, Xi Jinping will take into account a conflict with the neighbours in calculating the cost-benefits of these mega-projects.
A formal agreement/treaty whether in line with the 1997 UN Water Convention or any other formal agreement is the only solution which can give guarantees to the lower riparian States.
I will not comment on India 'opposing' the Tibetan activities in India.

India opposes "Tibetans to conduct political activities against China"
2013-03-29
Xinhua
Indian Prime Minister Manmohan Singh said Wednesday that his country recognizes the Tibet Autonomous Region is a part of the Chinese territory and that India will not allow Tibetans to conduct political activities against China in India.
Manmohan Singh made the remarks during meeting with Chinese President Xi Jinping on the sidelines of a summit of BRICS countries -- Brazil, Russia, India, China and South Africa -- in the South African port city of Durban on March 27th.
The Indian prime minister said his country, which adheres to an independent foreign policy, will not be used as a tool to contain China, adding that India is willing to make concerted efforts with China to show the world that they are cooperative partners instead of rivals.
India will abide by political guidelines set by both sides and seek a solution to the bilateral border issue from a strategic height with a commitment to safeguard peace in their border areas, he said.
He also voiced the hope that the two countries would respect each other's core interests and major concerns, deepen mutual strategic trust, strengthen coordination and cooperation on international affairs, and safeguard peace and stability in the region and the world at large.
Posted by Claude Arpi at 6:00 AM