The Chinese Model of Governance 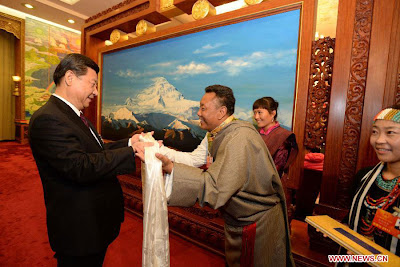 Soon-to-be president of China, Xi Jinping made it a point to meet the 'Tibetan' delegates at the National People's Congress (NPC) in Beijing.
These delegates are not known political figures in Tibet; they must have just been picked up for the circumstances.
The 'Han' Tibetans such Prof Ding Zhongli,Wang Huning or Chen Quanguo are not seen on the pictures, but the photo session was probably reserved to 'ethnic' Tibetans. The caption says:


Xi Jinping, general secretary of the Central Committee of the Communist Party of China (CPC), receives a hada [khata], a white silk scarf symbolizing respect and blessing, from a deputy [Lobsang Tempa] to the 12th from southwest China's Tibet Autonomous Region, in Beijing, capital of China, March 9, 2013. Xi joined a discussion with the Tibet delegation attending the first session of the 12th NPC in Beijing on Saturday.

Amusingly, China speaks of the Chinese Model of governance.
Eric Li, Shanghai venture capitalist and a 'political scientist' wrote in Foreign Affairs an article praising the supreme meritocracy prevalent in the Middle Kingdom.
He said: "A person with Barack Obama's pre-presidential professional experience would not even be the manager of a small county in China's system," adding that Xi Jinping: "By the time he made it to the top, Xi had already managed areas with total populations of over 150 million and combined GDPs of more than US$1.5 trillion."
Li believes: "China will continue to rise, not fade. The country's leaders will consolidate the one party model and, in the process, challenge the West's conventional wisdom about political development and the inevitable march towards electoral democracy. In the capital of the Middle Kingdom, the world might witness the birth of a post-democratic future".
I would like to know what are the 'merits' and 'experience' of these Tibetan delegates. The answer may puncture the so-called Chinese Model of governance.
By the way, an agency report mentioned that: "China's single legislative, the National People's Congress (NPC), is almost the wealthiest in the world with 83 billionaires counted among its delegates, according to a report. The China-based Hurun Global Rich List has identified 31 people having more than one billion dollars in personal assets, among the listed billionaire delegates to the Parliament. According to the list, the richest is Zong Qinghou, who is the founder of Chinese drinks maker Wahaha, with an estimated fortune of $13 billion. The Hurun list identifies the remaining 52 billionaires as delegates to the Chinese People's Political Consultative Conference (CPPCC), an advisory body. According to the list, the average fortune among the 83 billionaire delegates is 3.35 billion dollars, which contrasts heavily with the average annual wage of less than 7,000 dollars for Chinese urban workers. The number of dollar billionaires identified by the list was up 17 percent this year."
This is again called the Chinese Model.

Tibetan lamas write thank-you letter to Xi Jinping
BEIJING, March 9 (Xinhua) -- Xi Jinping, general secretary of the Communist Party of China (CPC) Central Committee, on Saturday expressed his best wishes to Tibetans after receiving a three-meter-long thank-you letter from 108 Tibetan lamas.
"Please convey my best wishes to all. Tashi delek (a Tibetan greeting for good luck and best wishes)," Xi said while attending a panel discussion of the Tibetan delegation to the first session of the 12th National People's Congress (NPC).
NPC deputy Losang Tenpa presented to Xi a hada, a strip of raw silk and linen for good blessing, as well as the hand-written thank-you letter from the 108 high monks of Tibetan Buddhism.
"The high monks in Tibet are grateful to the CPC for its religious policies, so they wrote the letter that I'm presenting to you," Losang Tenpa said. 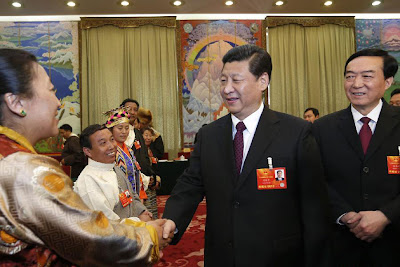 Xi Jinping  general secretary of the Central Committee of the Communist Party of China (CPC), talks with a deputy to the 12th National People's Congress (NPC) from southwest China's Tibet Autonomous Region, in Beijing, capital of China, March 9, 2013.
Posted by Claude Arpi at 6:05 AM