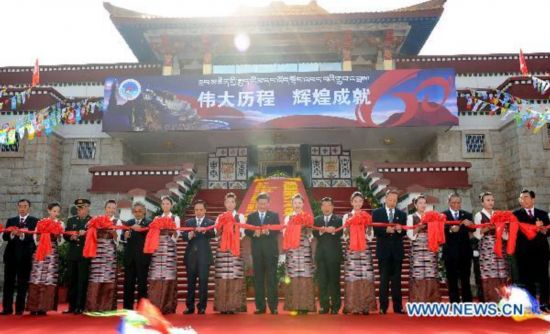 Why do Chinese leaders love Tibet so much?
Perhaps because a posting on the Roof of the World seems to bring Communist officials ‘good luck’ in their career.
The latest senior cadre to experience this is the 47-year-old Qin Yizhi who served as a vice-chairman of Tibet's regional government. He has just been appointed as the head of the Communist Youth League, “a training ground for future party and government officials with nearly 80 million members” as the South China Morning Post (SCMP) put it.
The Hong Kong newspaper adds: “His appointment indicates he could play a bigger role in China's leadership in the future, as most of his predecessors in the post have done so.”
Guangdong party secretary Hu Chunhua, often considered as the future leader of China in 2022, had earlier followed the same trajectory: first vice-chairman of Tibet's regional government in 2003 and then Youth League boss in 2006. Hu (not a relative of former President Hu Jintao) is now a member of the all-powerful Politburo of the Chinese Communist Party (CCP).
Qin had taken his job in Lhasa in 2005 as Lhasa Party Chief; he later became vice-chairman of the Tibetan government.
Blogger Tsering Woeser considers Qin as a hardliner who, during his tenure, consistently pushed for ‘patriotic education’, in other words, ‘sinization’ of education. Woeser, quoted by the SMCP, added: “His promotion could give a very bad indication to the current Tibetan officials that only hardliners can get promoted.”
Qin has an illustrious predecessor. In September 1987, Lhasa witnessed a series of large-scale riots. As the Chinese leadership felt they were losing face in the world's eyes, Beijing became more and more nervous. The monks, the very same people who were supposed to have been 'liberated' from the clutches of the high clergy, were now revolting against the 'motherland.' Beijing reasoned that if the situation were allowed to drift, China could follow the Soviet Union on the way to disintegration; something had to be done.
The strong men in the Politburo, Li Peng and Qiao Shi, visited Tibet in July 1988. Soon after, it was decided to appoint the young cadre, Hu Jintao as Tibet’s Party chief. It was to be the crucial turn in Hu's career. He probably knew he had to show results in a very short time to repay the confidence placed in him by the senior leaders; he could not afford to fail. Hu took charge of the rebellious region on January 12, 1989.
Soon after, a Beijing newspaper Zhongguo Xinwen She published an interview with Hu in which he described his two main tasks in Tibet: “To safeguard the unification of the motherland, adopt a clear-cut stand to oppose separatism, and stabilize the situation in Tibet,” and then: “to continue to carry out economic construction.”
This would later be known as Hu's strategy of 'grasping with both hands.'
On January 23, Hu visited the Tashilhunpo monastery in Shigatse. He was accompanied by the Panchen Lama, the second highest ranking Tibetan Lama after the Dalai Lama. The official occasion was the consecration of a stupa containing the mortal remains of one of the previous Panchen Lamas. To everyone's surprise, during the function, the Panchen Lama denounced the Communist Party's role in Tibet. He said: “although there had been developments in Tibet since its liberation, this development had cost more dearly than its achievements. This mistake must never be repeated.” Four days later, he passed away in mysterious circumstances. Though it has never been proven, many Tibetans believed that he was murdered.
When a demonstration erupted on March 5, the People's Armed Police quickly took control of the situation; it was there that the future President of China showed his skills.
Some information which filtered out Tibet affirmed that on March 6 alone, 387 Tibetans were massacred around the Central Cathedral in Lhasa.
Martial law was clamped on March 8. The tragic 1988 events in Lhasa seem to have been a rehearsal for an even more important episode: the student rebellion on Tiananmen Square three months later.
In Beijing’s eyes, Hu saved Chin, which could have plunged into the 'chaos' so feared by the Chinese emperors. Had Tibet been lost, no doubt other provinces such as Xinjiang and Inner Mongolia would have followed in quick succession.
Today at least 10 out of 25-member Politburo (PB) are, or have been connected with Tibet, in one way or another. Just to give a few examples.
President Xi Jinping is connected through his father Xi Zhongxun who was one of the senior officials ‘in charge’ of the Tibetan affairs the 1950s and later the 80s.
One of the two lady-members, Liu Yandong has been associated with the United Front Work Department which looks after Tibet; she headed the organization between 2002 and 2007.
Yu Zhengsheng, no 4 in the hierarchy, will soon be nominated Chairman of Central Working Coordination Small Group on Tibet, overlooking the restive region’s affairs.
I have already mentioned Hu Chunhua, the Party’s rising star.
Another PB member is Liu Qibao; he was Party Secretary of Sichuan province, responsible for large areas of Tibet (2008-2012), also a hardliner.
Guo Jinlong has been posted as Secretary of Tibet Autonomous Regional Committee from 2000 to 2004. He was pivotal in the Lhasa Railway project. The list is long and though not in the Top 25, Zhang Qingli, the Party boss in Lhasa till 2011, who called the Dalai Lama a ‘wolf in monk’s garb’, has now been promoted to the prestigious post of Secretary General of the Chinese People’s Consultative Conference. He will be the main advisor of Yu Zhengsheng for Tibet issues.
The ‘good luck’ of the high Chinese officials is not that providential for the Tibetans as most of these leaders took a harsh stance while posted on the Roof of the World.
One can doubt that so many knowledgeable cooks, even if they are experts on steaming momos, can translate a ‘cool’ policy for Tibet.
Posted by Claude Arpi at 6:00 AM