Padma Choling, alias Pema Thinley is an important man.
Officially, he is a deputy to the 12th National People's Congress (NPC), director of the Standing Committee of the Tibetan Autonomous Region People's Congress，deputy secretary of the Communist Party of China in Tibet Autonomous Region, but most importantly (and this is not mentioned in this article of China Tibet Online), he is the only Tibetan in the elite 205-member Central Committee of the Chinese Communist Party.
In other words, he is the senior most Tibetan in the hierarchy today.
In an interview on the side of the National People's Congress, he said with a straight face that "No local residents, monks or nuns in Tibet Autonomous Region have self-immolated so far, despite a string of similar incidents in neighboring Tibetan-inhabited regions."
Either Pema Thinley is ignorant or he is poorly informed of what is happening in his region.
While it is true that most of the self-immolations occurred in the former provinces of Amdo and Kham (now administrated by the provinces of Qinghai, Gansu, Yunnan, and Sichuan), a few immolations were reported from the Tibetan Autonomous Region.
Here are some statistics: 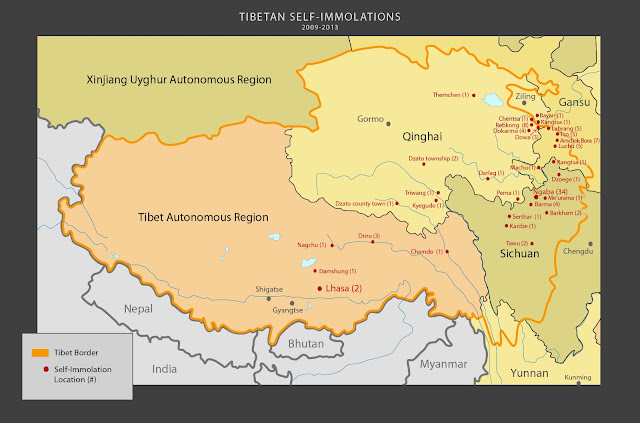 International Campaign for Tibet mentions at least two self-immolators in Lhasa itself.
Dorje Tseten, age: 19, date: May 27, 2012, deceased
Location: Outside of the Jokhang Temple in Lhasa
The Washington-based organization commented:

Two young Tibetan men set fire to themselves on May 27 outside one of Tibet’s holiest shrines, the Jokhang Temple, in the first self-immolation in Lhasa, Tibet’s historic capital. Nineteen-year old Dorje Tseten had left home after high school and had been renting a room in a house in Lhasa. The entire household was detained soon after his self-immolation. Voice of America Tibetan language service has reported that the two Tibetans, who self-immolated together, worked in a restaurant in Lhasa. Dorje Tseten was reportedly from Labrang (Chinese: Xiahe) in Gansu, the Tibetan area of Amdo.
The self-immolations took place during Saga Dawa, an important religious period for Tibetan Buddhists that commemorates the Buddha’s birth, enlightenment and death. The self-immolations are the first in Lhasa where Chinese security has been tight since March 2008 when protests occurred across Tibet and rocked the capital city. The official media reported today that Lhasa's Public Security Bureau has set up a special task force to investigate the case.
Dorje Tseten is referred to in Xinhua sources as Tobgye Tseten.

The second is Dargye
Dargye, age: around 25, date: May 27, 2012, deceased
Location: Outside of the Jokhang Temple in Lhasa


According to monks from Kirti Monastery in exile, 25-year old Dargye had entered Kirti monastery as a boy and disrobed a few years ago. Voice of America Tibetan language service has reported that the two Tibetans, who self-immolated together, worked in a restaurant in Lhasa. Dargye was reportedly from Ngaba (Chinese: Aba) in Sichuan (where most of the self-immolations have taken place).

As the map shows, some self-immolations also occurred in Chamdo, Nagchuka and other places in the Tibetan Autonomous Region.
Next time, Pema Thinley should do his homework before giving interviews. 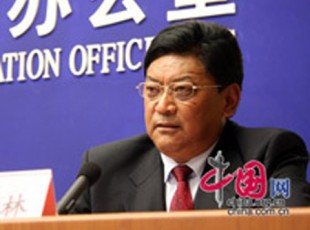 Regional development is the key
Padma Choling said several decades have passed since the peaceful liberation and the Tibet democratic reform. All ethnic groups in Tibet could feel the warmth of the motherland as well as the atmosphere of national solidarity.
Padma Choling pointed out that the key to the development of Tibet is good management of its own regional affairs, particularly improvement of people's livelihood. Only in this way would the ordinary people embrace the Party and motherland.
People are willing to live a stable and happy life, and they certainly will cherish and protect the hard-won happiness. Therefore, any conspiracy intended to split Tibet from our motherland is doomed to fail, Padma Choling added.
No local residents, monks, nuns self-immolate in Tibet
Padma Choling said that the Central government has held five work conferences on Tibet to improve people's livelihood in recent years. People in Tibet including monks and nuns deserve a happy life. They cherish life and love the society and the country.
"No local residents, monks or nuns in Tibet Autonomous Region have self-immolated so far, despite a string of similar incidents in neighboring Tibetan-inhabited regions,"said Padma Choling.
Developing economy, improving people's well-being, and building a sound education is crucial to overall development of Tibet, Padma Choling added.