Xi Jinping and the Tibet issue 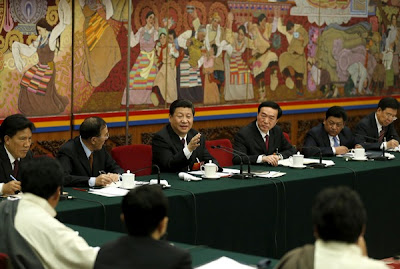 My post The Chinese who matter in Tibetan Affairs has been updated. I have added Wang Huning, a member of the Politiburo who 'represents' Tibet at the National People's Congress.
Recently, he has often been seen with Xi Jinping; for example he accompanied him to Gansu (near the Labrang monastery) during the Spring Festival.
According to the correspondent of the Ta Kung Pao, a Hong Kong newspaper regarded as the mouthpiece of Communist Party of China, Wang Huning, Chang Xiaobing and Ding Zhongli, the Han members of the Tibet Autonomous Region (TAR) delegation were present during Xi Jinping’s meet with the TAR delegation during the on-going National People's Congress.
The Party General Secretary would have said the trio was members of the TAR delegation because they represented three faces of the vital Aid Tibet program (Central, economic and scientific aid).
Xi also noted that a large number of senior officials who attended the Two Meetings in Beijing had been involved with different responsibilities in Tibet in the past. (It is said that 10 of the 25 members of the Politburo have been involved at one point or another of their career with Tibet).
Xi apparently said the number of top officials involved in Tibet affairs will only increase in the future. He gave the assurance that Beijing will continue to pay close attention to the region.
Ma Haoliang, the Ta Kung Pao correspondent (or reporter) was apparently present when Xi Jinping met the Tibet delegation. He noted:


Xi pledged that his new leadership group would pay the same close attention to Tibet as previous leadership groups and would continue to emphasize “the maintenance of stability and leap-frog style development”, following China’s own special pathway and according to Tibet’s special characteristics. He cautioned however that there can be no stability in Tibet without economic development, but a constant vigilance must be exercised against ethnic problems, sensitive religious issues and sudden waves of Tibet independence sentiment .
Xi said China will not bend to the pressure produced by collusion between foreign hostile forces and those seeking Tibet independence.
Xi said the special characteristics of Tibet must be respected with even greater protection to its culture and religious faith as well as continuous support for its rapid, leap-frog economic development.
Xi remarked about how impressed he was by Tibet during his July 2011 trip for the 60th anniversary of Tibet’s ‘peaceful liberation.’

There is no other independent source to corroborate the Ta Kung Pao's assertions.
Also regarding Tibet, the South China Morning Post mentioned that: "The former top aide to outgoing President Hu Jintao scraped through to vice-chairmanship of the nation's top political advisory body (CPPCC) yesterday with the lowest number of votes, after his career was hit by a scandal over the cover-up of his son's death in a Ferrari crash in Beijing last March."
I have mentioned a few times on this blog the role of Ling Jihua, the new boss of the United Front Department dealing amongst others with Tibet affairs.
Ling Jihua, Hu Jintao's former Chief of Staff, made it to vice-chairman with 90 of the 2,191 delegates voting against him, the highest number of opposition votes recorded.
The Hong Kong newspaper said the Ling showed no emotion after the result was announced. Though the vice-chairmanship of the CPPCC is largely symbolic, those holding the office are regarded as 'state leaders' and entitled to a range of perks.
Remember the Ferrari car accident which ruined Ling's promising career. Two Tibetan women were apparently involved.,
The South China Morning Post had reported on October 2012. The 25-year-olds were pulled half-naked from car smash in March
The two young women at the centre of the Ferrari crash that killed the son of high-level Communist Party official Ling Jihua have been named.
In its latest issue, Hong Kong-based news magazine Asia Weekly writes that the two young women in the vehicle when Ling Gu died upon impact after crashing his Ferrari were Tashi Dolma (Zhaxi Zhuoma), daughter of a deputy director of the Qinghai Provincial Public Security Department, and Yang Ji, then a student at China University of Political Science and Law in Beijing, reportedly the daughter of a well-known living Buddha also from Qinghai.
According to Asia Weekly, Yang passed away unexpectedly last month despite showing signs of positive recovery from the serious injuries she sustained in the accident. It is claimed she felt unwell and was given an injection last month, after which she fell into a coma and later died.
High-level Communist Party official Ling Jihua lost his son in the accident. The magazine, citing 'informed Beijing sources', claims both the women are ethnic Tibetans and were each 25 years old at the time of the accident.
The accident happened in the early hours of March 18 when the speeding Ferrari smashed into a wall, rebounded and crushed a railing on the opposite side of the road. One naked body and two half-naked bodies were thrown from the wreckage. A half-naked man Ling Gu died immediately while two young women – one naked and one half-naked – were seriously injured.
Photos of the wreckage circulated online and many internet users took it as another drink-driving accident involving the "second-generation rich".
Wild stories began to spread that the trio were playing sex games in the car when the accident took place. Different versions of who was driving and who was in the front and back seats became the subject of gossip in Beijing's corridors of power.

The least one can say is a solution for the Tibetan issue is not on the horizon, though Xi's rule may be more benign than Hu Jintao's.
Posted by Claude Arpi at 7:07 AM