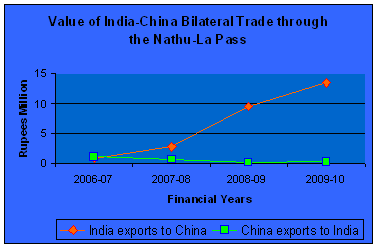 China says that the Foreign Trade of the Tibetan Autonomous Region is progressing well.
Obviously, this is not thanks to the trade exchanges with India.
The border trade has been stagnating for years.
In the article on China Tibet Online, He Gang, a researcher with Tibet Academy of Social Sciences states that "Tibetan foreign trades surge benefits from the steady conditions of neighboring countries, such as Nepal."
In fact, it is with Nepal only. The opening a Consulate of Nepal in Lhasa is probably responsible for this 'surge'.
But is has a price.
In April, AsiaNews reported: "To help Kathmandu restore its diplomatic missions, Beijing is financing the construction of three new buildings in the Nepalese Consulate in Lhasa (Tibet). In the rest of the world Nepal's embassies are crumbling for lack of funds. The project was recently approved. The buildings will house the residence of the consul and his staff."
Already in 2009, Beijing had announced it would pay 1,80,000 Euros for the Consulate of Nepal in the Tibetan capital.
A Memorandum of Understanding was signed in November 2011 between Kathmandu and the Government of the Tibet Autonomous Region providing, in addition to restoration of the buildings, giving an even wider representation of the Nepalis State in Tibet. Let us not forget that Nepal is the only country which has a consulate in Tibet.
AsiaNews affirms that in Kathmandu, not everyone is happy with the latest Chinese offers; some Nepalese politicians even accused Beijing of wanting to control the bilateral relations in its favour and increase the clampdown on Tibetan exiles in Nepal.
It quoted Lok Raj Baral, former ambassador of Nepal to India: "The Maoist government should limit itself to applying for funding at home, it should not accept foreign funding for its diplomatic missions. How is it possible to defend national interests when working inside a building paid for with money from the host country? "
Bheki Bahadur Thapa, former Minister for Foreign Affairs, stated that Kathmandu is increasingly severe with the exiled Tibetans and a consulate in Lhasa built with Chinese money poses a serious risk to the lives of the Tibetans.

As mentioned yesterday on this blog, Beijing has rejected New Delhi’s request to allow India to open a consulate in Lhasa. India’s demand was in response to China’s desire to have a consulate in Chennai. Instead, Beijing has said that Chengdu, the capital of Sichuan province, could be an alternative.
Chengdu will certainly not help 'foreign trade' with Tibet.
Beijing would perhaps grant India's demand, would New Delhi accept to restrict the Dalai Lama and the Tibetans in exile or harass them like the Nepal Government does.
In exchange of a clampdown on the Tibetans in India, China would probably pay for a building for the Indian Consulate in Lhasa (though the old building, Dekyi Lingka still exists and still belongs to India).
But why should Delhi agree to such anti-democratic and inhuman action against the Tibetan refugees.
By the way, India is more and more frustrated with the bilateral trade talks with China, initiated by Chinese Premier Wen Jiabao in December 2010, when he visited New Delhi.
During the last fiscal year ended March 31, the trade deficit of India with China jumped 42 percent to about $40 billion.
Even India’s Commerce Minister Anand Sharma said that he is 'very concerned' about the imbalance with China
Asia Pacific Finance News said: "The trade woes of India has become economic threat and the current account deficit with the world is 4.5 percent of GDP in the quarter ended March 31, which is an all-time high. This has also resulted in sharp depreciation of rupee."
A complicate issue, but its is not worth for India, trading business against human rights. 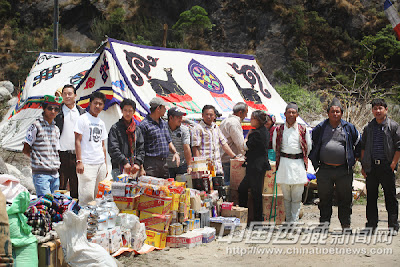 Foreign trades boost Tibetan economic growth
China Tibet Online
Lucy Su
2012-08-03
The foreign trade of Tibet continues rising in the first half of this year with total export-import volume reaching more than 1 billion US dollars, increasing by 1.7 times from the same period last year and contributing significantly to Tibetan economic growth, according to Xinhua News Agency.
According to the statistics, local GDP of Tibet reached 28.72 billion yuan, increasing by 11.3 percent from that of the previous year; the growth rate is 3.5 percent points higher than the national average, and keeps stable growth.
"It is the surge of foreign trades that drives Tibetan local GDP growth in the first six months of 2012,” said He Gang, a researcher with Tibet Academy of Social Sciences.
According to He, Tibetan foreign trades surge benefits from the steady conditions of neighboring countries, such as Nepal.
During the first six months, Tibetan foreign trades with Nepal amounts to 530 million US dollars, increasing by 79.5 percent, according to Lhasa Custom.
The improvement of Tibetan transportation network, especially the Qinghai-Tibet Railway, and development of Tibetan characteristic and competitive industries also contribute a lot.
Meanwhile, investments also boost Tibet’s developments, thanks to a series of major projects carried out at the beginning of this year, said Dorje Dradul, deputy director general of Tibet Bureau of Statistics.
Posted by Claude Arpi