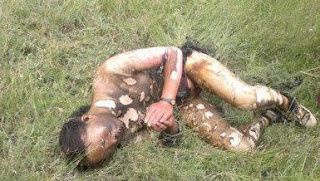 Last week, Dolkar Tso, mother of a 5-year-old daughter and a 2-year-old son undressed near the Tsoe monastery in Kanlho prefecture of Amdo region and later immolated herself.
She is said to  have raised slogans for the return of the Dalai Lama to Tibet and the freedom of her country.
She passed away soon after succumbing to her injuries.
When monks from the nearby large monastery of Labrang Tashikhyil traveled to Tsoe, they were arrested by local Chinese authorities. They could not even pay their last respect to the departed soul.
It is from the same Amdo region that Choeyang Kyi, the bronze medal at the London Olympics comes from.
According to Xinhua: "She grew up herding yaks on a plateau meadow, just like many other women from rural Tibet. Singing and praying accounted for much of her spare time. And it was not until 2008 that she got the chance to watch the Olympic Games on TV for the first time."
The young Choeyang told the Chinese agencies that during the race: "I had only one thought in mind -- fight! The crowds were so enthusiastic. That helped me stay in high spirits."
On her blog on Sina Weibo, the most popular microblogging site, many congratulated her. A blogger wrote: "Last night, all of the Tibetans here stayed up and watched your game on the track. We were thrilled to see you win a medal. Tashi delek! Hope you can bring more glory to the Tibetan people."
Someone else commented: "She smiled a lot during the final 20 km. But I was almost thrilled to tears." 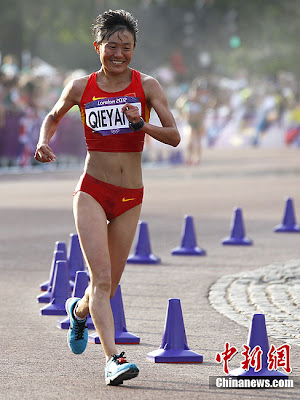 I wish that would more Choeyang Kyis and less Dolkar Tsos.
It is not that I deny the extraordinary courage of this mother of two in sacrificing her own life, but to win a medal also needs decades of sacrifice.
A report mentioned that Choeyang has not seen her parents for years; this is probably true for most Olympians in China.
But just imagine, that 5 young Tibetans, living in exile manage to earn an Olympic medal (they probably would have to compete as Indian nationals), it would have incredible effects on their country's struggle for freedom.
As I mentioned yesterday on this blog, many young Tibetans are very fit, some of them having fought on the Siachen or elsewhere on the Himalayas under the Indian flag.
To win an Olympic medal certainly means more than to be fit, it demands 10 or 15 years of hard work and sacrifice.
Who is ready?
At the end, I prefer a hero smiling that a burned hero. This is not to lessen the action of Dolkar Tso and those who immolated themselves.

Tibetan nomad youth passes away after setting self on fire
Tibetan Centre for Human Rights and Democracy
12 August 2012,
Dharamsala (India)
The young Tibetan nomad, Choepa in Meruma township in Ngaba (Chinese: Aba), Sichuan Province has succumbed to burn injuries after setting himself ablaze on Friday in protest against the Chinese government.
“Choepa died of burn injuries at around 3 pm (local time) at a place on way near to Barkham (Chinese: Ma’erkang) on the same day that he set himself on fire,” a Tibetan monk in exile with reliable contacts in Ngaba said yesterday evening.
Depriving the deceased a proper cremation in accordance with the Buddhist rites and rituals, the Chinese authorities in Barkham cremated the charred body of Choepa, and handed over the ashes of the deceased to the latter’s family.
Following the 24-year old's fiery protest, officers from the People's Armed Police (PAP) have reportedly gathered in large numbers in and around Meruma area; some were seen patrolling the area. The atmosphere is still said to be highly tense as PAP officers have surrounded the town on all sides since the fiery protest on Friday.
Choepa is one of the participants in the demonstration that took place in Meruma on 23 January 2012, and since then he had been on the run evading arrest in the hands of local Chinese police.
“Choepa was on the run and hiding since the demonstration and the Chinese police couldn’t catch him until he turned himself up, and burned himself alive last Friday,” the same source said. Choepa is survived by his six family members-parents and four siblings.
More than 40 Tibetans in Tibet in recent months have lighted themselves to the fire in protest against the Chinese government, demanding for ‘freedom in Tibet’ and ‘return of the Tibetan spiritual leader, the Dalai Lama from exile'.
Posted by Claude Arpi