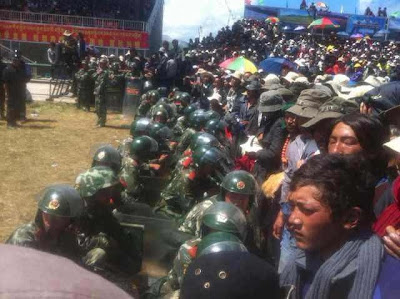 The Tibetans of Lhasa are the happiest people of China!
If you don't believe it, read the article of The China Daily posted below.
At the meantime, in another other corner of Tibet, one reads that on 12 August "hundreds of armed forces, particularly the People's Armed Police, were deployed at the immensely popular annual horse-racing festival at Machu county in Kanlho Tibetan Autonomous Prefecture of Gansu Province."
Apparently, local authorities were apprehensive of Tibetans staging protests and self-immolations at the public event. These are not signs of Happiness.
Why can't the Chinese authorities 'export' Lhasa happiness to other 'Tibetan-inhabited areas'  and stop the wave of self-immolations?
The Tibetan Centre for Human Rights and Democracy in Dharamsala reported:


In addition to unprecedented presence of armed security personnel, the local authorities also issued a public notice containing 11 points that essentially ask Tibetans to refrain from using the annual event to express their grievances in public.
The notice, issued in both Tibetan and Chinese language, barred anyone from carrying 'flammable' and 'poisonous' objects and engaging in protest activities at the event venue, and added that violating the rules listed in the notice would attract punishment ranging from 'detention' to prosecution in the courts.
In Point no. 10 of the notice, activities such as 'demonstrations, protests, appeals, self-injury, suicide, self-immolation' and 'beating, smashing, and looting' were deemed 'illegal' and therefore banned at the event. Point no. 6 banned objects such as 'fire crackers, flammable liquids, bows and arrows, swords and other objects made of iron, as well as poisonous substances.' Point no. 5 banned anyone from carrying documents and leaflets relating to political, religious, cultural and economic matters to the venue without prior permission from the relevant authorities.
The last point listed punishment for those who violate the rules: those committing 'medium-range offense' would get 'detentions' while those engaging in bigger criminal offense be taken to court and sentenced accordingly.

This is called forced happiness!
Around that time, the 'Chinese' Panchen Lama  said the the Buddhist doctrines should be interpreted in the right way. He was talking with 50 'senior' monks from different Buddhist sects in Shigatse. He spoke of  promoting patriotism, rule of law, ethnic unity, social harmony, and environmental protection. He said: "Buddhism is a recipe for ending secular sufferings and dispelling bad Karma for the masses. It can guide people to ditch the evil for the virtue".
Well, the Communist Party seems to have lost the recipe, outside Lhasa at least!

Lhasa ranks at top of residents' happiness list
2012-08-21
China Daily
Lhasa, the city of sunlight, topped an annual survey of residents' sense of happiness in Chinese cities.
The capital of the Tibet autonomous region has ranked at the top of the survey conducted by China Central Television for five consecutive years.
In this year’s list, Lhasa was followed by Taiyuan, capital of Shanxi province, Hefei, capital of Anhui province, Tianjin municipality, Changsha, capital of Hunan province, and Hohhot, capital of the Inner Mongolia autonomous region.
The capital cities where residents have the most leisure time include Guiyang, Haikou, Guangzhou, Hangzhou, Lhasa, Chengdu and Chongqing.
Around 100,000 households from 104 cities were polled for the survey.
The results showed income level most affected people’s sense of well-being (55.5 percent), followed by health (48.9 percent) and quality of marriage or love life (32 percent).
Among people with an annual income of 100,000 yuan ($15,700) or more, 6 percent of respondents said they did not have enough free time, compared with 12 percent for those earning 20,000 yuan or less a year.
People’s favorite leisure time activities are surfing the Web and watching TV. Only a small percentage of respondents said they used free time for education, training, going to the gym or social life, according to the results.
Zou Jun, director of the Jiangsu Institute of Urban Planning and Design in Nanjing, said although similar rankings have been conducted by different organizations, the effort is worthwhile because it helps city administrators create new development paths that give greater consideration to residents’ welfare.
The rankings are a reminder to city planners that they should not only address short-term problems such as creating new jobs, but also long-term ones such as providing a decent standard of living and public services for low-income and migrant households, he said.
Zou said officials like to construct landmark buildings or entertainment facilities in city centers as main attractions, but "a city exists not just for tourists. It exists, more importantly, for those who actually live there".
No cities from the Yangtze River Delta or Pearl River Delta regions appeared in the new rankings. Zou said people in these regions may have higher incomes but less leisure time for cultural and spiritual interests.
Wang Wenjie, 27, has worked as a human resources specialist at a pharmaceutical company in Shanghai for two years. She has adopted a positive mindset to deal with daily pressures.
"I have a circle of close friends. And I am surrounded by intelligent people with similar interests. Such an environment inspires me to grow and learn," Wang said.
Wang’s parents in Fuzhou, Fujian province, used to worry about her, but after visiting Shanghai they became convinced that she enjoys living there.
Wang said she enjoys helping people learn new skills and seeing a sparkle in their eyes.
"I think of five things that I am grateful for when I go to bed every night," she said, "For me, keeping a positive mindset is the key to finding happiness in life."
Wang finishes work at 5 pm and has plenty of time to do activities she enjoys, such as swimming, hanging out with friends, going to a reading group and watching theater performances.
"Living in big cities may involve pressure due to higher expenses. But they can offer a rich cultural life for people to feel more fulfilled," she said.
Posted by Claude Arpi