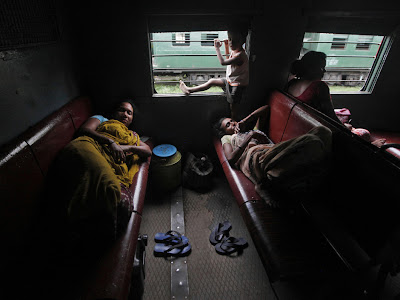 As mentioned in this article from the National Geographic Correspondent on Water issues, India "suffers from inertia on one hand and from destructive greed on the other. It doesn’t suffer from a shortage of dams"
But there are other related issues which complicate the situation.
Of course, great is the temptation to built new dams, under the pretext to 'produce more', in reality to mint more money like in the Arunachal Pradesh case.
An article in Nature China warns us: "Climate change: Melting ice before your eyes".
Glaciologist Tandong Yao at the Chinese Academy of Sciences in Beijing and his colleagues say: "Glaciers in the Himalayas have shrunk over the past 30 years", adding:

Tandong Yao studied differences in status of 7,090 glaciers between the 1970s and 2000s using topographic maps, satellite images and on-site observations. They found that the Himalayas (excluding the Karakorum) experienced the most intensive shrinkage, and that the extent of shrinkage decreases from the Himalayas to the continental interior.
Interestingly they warned: "if glacier shrinkage continues in the Himalayas, downstream regions could experience unsustainable alterations to water supplies and growing incidences of geohazards."
Even more worrying is the desertification of the Tibetan plateau.
According to Xinhua, as a result of global warming the Qinghai-Tibet Railway is being threatened by desertification on the Qinghai-Tibet Plateau .
Wang Jinchang, a senior engineer with the Qinghai-Tibet Railway Company told the Chinese news agency that about 443 kilometers of the 1,956-km railway are in areas affected by desertification, including 103 km that lie in seriously desertified areas.
Wang affirmed that the threat of soil erosion has grown very fast in recent years, mostly near rivers and wetlands from Golmud and Lhasa, and the amount of affected rail tracks almost doubled from 2003 to 2009.
Another expert in soil erosion control, An Fengjie, from China's State Forestry Administrations stated that the plateau region suffered from desertification long before the railway was built: "The railway did not cause the problem, but it gives us an opportunity to witness the severity and scale of soil erosion on the Qinghai-Tibet Plateau."
The Chinese will not admit that the railway line made the situation worse. It appears that sands buried rail racks and disrupted train services over 1,362 times from 1984 to 2002 on the Xining-Golmud section of the railway.
Xinhua says that one of the most prevalent theories blames global warming for the ecological deterioration in the plateau region.
According to Sun Zhizhong, from the Chinese Academy of Sciences, the temperatures on the Qinghai-Tibet plateau rose over two degrees Celsius on average over the past three years, leaving large chunks of frozen earth to defrost.
One of the consequences is that the Kokonor (or Qinghai Lake), China's largest saltwater lake keeps expanding.
For a long time, this phenomenon remained unexplained.
Xinhua reported yesterday: "The surface area of China's largest inland saltwater lake has been expanding for eight years, according to the latest remote sensing survey."
Zhou Bingrong, deputy chief of the provincial institute of meteorological sciences found out that:


The Qinghai Lake in northwest China's Qinghai province measured 4,354.28 square km, according to satellite data collected on July 19 and published on Sunday, s. The figure was 14.58 square km larger than the same time last year, and the largest in 12 years.

Zhou's institute has been carrying out dynamic surveillance of the lake's surface area since 2001, when the lake was shrinking due to climate change and human activity.
Zhou takes the credit for the increase of the lake: "We have noticed an apparent increase of water since 2005, thanks to more rainfall and sustained environmental protection efforts," but the increase in the waters filling up the lake is more likely to be due to climate change and melting of permafrost".
The Qinghai Lake had been shrinking since the 1950s, but now is increasing.

India is bound to have new black-outs, if new measures as the ones suggested by Himanshu Thakkar in the article below are not urgently taken.
But is there the will to bring out meaningful changes.
The problem is that these measures may not fill the politicians pockets, while building new dams will do.
It may be difficult for the grid to prevail over the greed.
There is another angle to the blackout: computer hackers.
In August 2003, a blackout occurred in North America, leaving 50 million people in the dark for four days.
Bloomberg wrote: "[it] provides a glimpse of the havoc a cyber attack could inflict on the nation’s power grid."
Adding: "Internet-based terrorists would be capable of causing blackouts “on the order of nine to 18 months” by disabling critical systems such as transformers, said Joe Weiss, managing director of Applied Control Solutions LLC, a Cupertino, California-based security consulting company."
Apparently the 2003 event was triggered when a power line touched tree branches in Ohio; it ultimately caused losses of as much as $10 billion, according to a study by the U.S. and Canadian governments.
According to Bloomberg that: "Energy companies including utilities would have to increase their investment in computer security more than seven-fold to reach an ideal level of protection."
A Bloomberg survey of network managers at 21 energy companies found that companies spend an average of $45.8 million a year on computer security and are able to prevent 69 percent of known cyber strikes against their systems.
It is quite ominous!
Though in the case of India, external hackers are not required. Undisciplined Electricity Boards will continue to do the job.


India’s Massive Blackout, and the Environmental Danger to Come
Dan Morrison
National Geographic News Correspondent in Water Currents
July 31, 2012
An estimated 600 million Indians – more people than live in western Europe — were without electricity today, victims of a massive blackout that darkened most of the northern and eastern portions of the country.
The Great Indian Outage, stretching from New Delhi to Kolkata, comes just a day after 300 million people in northern India lost power for much of Monday.
It is a disaster that’s caused untold damage to India’s economy, its prestige, and its well-being – think of the millions of patients in hospitals, the commuters stuck on trains, and farmers in need of irrigation. Hundreds of miners in the states of West Bengal and Jharkand were trapped underground by the blackout. Some 300 trains were reportedly stalled across the country.
There’s more damage to come, I fear: Forces that have been bridling against environmental regulations and science-based activism will use the Great Outage as a cudgel to demolish future restraints on dam construction, coal mining, and other projects.
India’s humiliating power failure is sure to birth a slogan as reductive and wrong as America’s own “Drill Baby Drill.”
The irony is that this outage was likely caused in part by mismanagement at the Bhakra series of hydroelectric dams in Punjab and Himachal Pradesh states in northern India, according to Himanshu Thakkar of the South Asia Network on Dams, Rivers and People.
“Had these dams been operated more rationally, keeping in mind the emerging realities and forecasts, the situation in Northwest India would have been different,” Thakkar told me. “Higher [water] levels in these dams would have meant more power generation for each unit of water release and at the same time more water for agriculture, thus less water [for irrigation] pumped from aquifers, and thus less demand of power.”
Earlier this month, Thakkar’s organization published a short paper criticizing dam administrators for allowing water levels to become alarmingly low.
Thakkar says the answer to India’s current power crisis isn’t more hydroelectric dams, as most currently existing dams aren’t built or operated for maximum efficiency. Instead, power can be saved by harvesting rainwater.
“Since most of our water is coming from groundwater, we need to store the rainfall in aquifers that are fast depleting,” he says. “This would have multiple spin-off benefits.” With healthier aquifers, farmers wouldn’t have to run electric-powered pumps as much to adequately irrigate their crops – a major drag on the power grid.
“More dams won’t help achieve that,” Thakkar says, adding that farmers should shift to less water-intensive crops. “It is amazing that, among all the crops, [acreage devoted to] sugarcane has gone up in this drought year!”
At the Center for Science and the Environment, Chandra Bushan provides some of the hard numbers behind today’s blackout, as well as a simple cause: Indian states are taking more power from the grid than they are supposed to, even as the power system lacks the flexibility to meet seasonal spikes in demand.
In this case, a weak and tardy annual monsoon has millions of households and businesses running their air conditioners for longer than they would under normal conditions. This from the CSE:
Electricity generation for the month of June illustrates this problem:
In June 2012, India produced 8 per cent more electricity than in June 2011.
The generation from thermal power plants was 11.4 per cent higher than in June 2011. Coal-based power plants generated 16.7 per cent more electricity.
However, with low monsoon, the generation of electricity from hydropower plants reduced by 6 per cent compared to June 2011. In fact, hydropower plants produced 19 per cent lesser electricity in April-June, 2012 than the corresponding months in 2011. As hydro plants are also peak load plants, this reduction seems to have affected the peak power generation in the country significantly.
None of this logic – nor the many recent plans and ideas for improving the management and efficiency of India’s power grid – will make a difference to the contractors and bureaucrats in the “Build Baby Build” crowd that has much to gain from poorly-planned dam construction.
The debate over dams has become so silly that earlier this month a minister from the government of Uttarakhand state went on a one-day hunger strike to support more construction on the Himalayan tributaries of the Ganges River. Mantri Prasad Naithani’s constituency is in the region of Tehri Gahrwal, which was submerged a decade ago by the giant Tehri dam. Residents of the doomed town of Tehri were relocated to a “model town” higher up the valley to make room for the $1 billion, 1,000 megawatt hydroelectric dam’s reservoir.
When I visited New Tehri last year, power outages were commonplace.
But it’s brute force, not the rhetorical kind, that truly keeps this movement alive.
On June 22, the Indian environmentalist Bharat Jhunjhunwala was attacked in his home in Uttarakhand state by a gang of 40 thugs purportedly working for a contracting company. At the time of the attack, Jhunjhunwala, 62, had been hosting G.D. Agrawal, an eminent scientist turned swami who is also known as Gyan Swarup Anand. Agrawal was in the region to protest the coming submergence of the Dhari Devi Temple on the Alaknanda river by a hydroelectric project.
In full view of local police and journalists, the crowd kicked in Jhunjhunwalla’s door and blackened his face with ink. He and his wife were forced to flee the area.
“They threatened him that they will burn him alive in the house if he did not stop opposing the dams within two days,” according to an account by Jhunjhunwala’s family.
India’s power grid suffers from inertia on one hand and from destructive greed on the other. It doesn’t suffer from a shortage of dams.
Posted by Claude Arpi