The importance of Tibetan Archeology 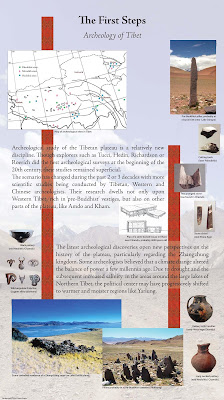 The Chinese have discovered an archeological site related to the Zhangzhung kingdom. That is good news, through it will probably be used to rewrite the history of Tibet and  show that the Tibetan plateau was already part of the Middle Kingdom more two thousand years ago.
When I wrote the history of Tibet in 25 panels (downloadable from my website), I mentioned about the importance of archeology.


"The archeology of the Tibetan plateau is a relatively new disciple. Though explorers such as Tucci, Hedin, Richardson or Roerich did the first archeological surveys at the beginning of the 20th century, their studies remained superficial.

The scenario has changed during the past 2 or 3 decades with more scientific studies being conducted by Tibetan, Western and Chinese archeologists. Their researches dwell not only upon Western Tibet, rich in ‘pre-Buddhist’ vestiges, but also on other parts of the plateau, like Amdo and Kham.

The latest archeological discoveries open new perspectives on the history of the plateau, particularly regarding the Zhangzhung kingdom. Archeologists believed today that a climate change altered the balance of power a few millennia ago. Due to the drought and subsequent increase in salinity of the areas around the large lakes of Northern Tibet, the political center may have progressively shifted to warmer and moister regions like Yarlung."

Hopefully this relation between climate change and migration will be researched further.
It could an ideal joint Indo-Chinese project.

Tombs bear secrets of 2,000-year old Tibetan kingdom
August 24, 2012
IANS
Tombs bear secrets of 2,000-year old Tibetan kingdom Lhasa: Four tombs unearthed in Tibet are believed to contain relics from an ancient Tibetan kingdom that thrived more than 2,000 years ago.
The tombs, found in Ngari prefecture, were found to contain wooden caskets with human remains, copperware, swords and the skeletons of cattle believed to have been buried as sacrificial items, said Tong Tao from the archeological institute of the Chinese Academy of Social Sciences.
"We believe the location of the tombs was central to the ancient Shangshung kingdom, a once-powerful tribe that was taken over by Songtsen Gampo to become part of Tibet in the seventh century," Xinhua quoted him as saying.
All four tombs were found near a Bon monastery in Gar county. Bon was a religion that prevailed in Tibet before Buddhism was introduced from India in the seventh century. Its followers worshipped "natural spirits" like mountains and lakes.
"The ancient kingdom of Shangshung is widely believed to be the cradle of the Bon religion and therefore a cultural and political center for the plateau," said Tong.
Most of the sacrificial items inside the tombs were apparently introduced to the plateau from India, what is known today as the Xinjiang Uygur autonomous region and China's interior regions, he said.
"The swords, for example, apparently came from central and northern Chinese regions, while a gold mask unearthed from one of the tombs is similar the gold masks prevalent in northern India," he said.
Tong and his colleagues believe the items indicate that the ancient Shangshung kingdom conducted diverse cultural and personnel exchanges and could be one of the earliest centres of civilization on the Tibet plateau.
None of the four tombs were newly discovered, but scientific excavation and research for conservation purposes started only in June.
In 2005, monks in Gar county unearthed combs, firewood, copper kitchen utensils, carbonized plants and pieces of silk -- some of which bore handwriting and paintings.
Jin Shubo, a senior official in Tibet who has an interest in plateau archaeology, sent the samples for carbon dating and found they dated back 1,800 to 2,200 years, putting them somewhere between the Western Han Dynasty (206 BC - AD 24) and the Wei kingdom (220 - 265), he said.
"The Book of Han, which recorded the history of the Han dynasty, said emperors of the dynasty often presented silk as gifts to maintain relations with the western kingdoms," said Jin.
The pieces of silk unearthed from the tombs, he said, were probably gifts from Chinese emperors.
A large quantity of horse, cattle and sheep skeletons indicates that the tomb's owners were rich and powerful, said Li Linhui, deputy head of Tibet's institute for heritage preservation.
One of the tombs housed the remains of four to five people, while the other three had one corpse each, he said.
Researchers have taken samples of the remains to Beijing for DNA analysis to determine whether the tomb's occupants were related.
Tong and his colleagues are planning to conduct large-scale excavation and research in the tombs next year.
"Hopefully, we'll find out more about the mysteries of the ancient Shangshung kingdom," he said.
IANS
Posted by Claude Arpi