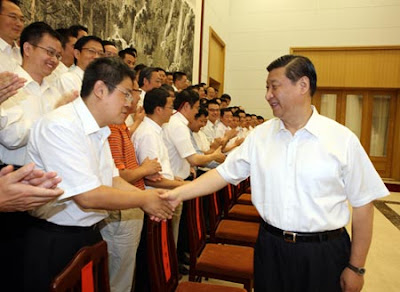 The article of The Wall Street Journal posted below, explains the importance of the 'internal references papers' prepared for the Party leadership by various Chinese 'experts'.
Yiyi Lu, the writer says: "At a recent conference of Chinese political scientists and international relations scholars in Beijing, a western academic remarked that he was struck by how Chinese scholars often seemed keen to use their research to come up with advice for the Chinese state on how to advance its goals. He observed that, by contrast, western scholars were more likely to act as critics rather than aspiring advisers to their governments."
In the meantime, the Chinese top leadership gathered for a summer conclave in the resort of Beidaihe to decide the future of the Middle Kingdom.
Jeremy Page for The Wall Street Journal wrote: "Vice President Xi Jinping, the man widely expected to take over the Communist Party's top job in the fall as part of the transition, met officials and academics advising the government in the northeastern beach resort of Beidaihe on Sunday, according to the state-run Xinhua news agency. It was the first official confirmation that he and other top Chinese leaders were in Beidaihe, where current and retired Communist Party chieftains usually gather in late July or early August to rest and hold informal talks in sprawling villas along a private beach."
Incidentally, it was in Beidaihe, that 50 years ago Mao Zedong decided to 'teach a lesson' to Nehru and India. I have dealt the subject in my article Why Mao attacked India in 1962.
The question of experts advising the Government will make many smile in India, where politicians do not need 'advice', having been elected by the People of India and in any case, being all-knowing.
The role of 'advisers' is certainly over-all positive, as in any case, it is up to the leaders to accept or reject the suggestions. However, often in China (perhaps due to the competition), these advisers offer the most extreme views.
Take the case of Zhao Gancheng, director of South Asia Studies at the Shanghai Institute for International Studies, an India's expert. He recently criticized India's proposal to reopen the Indian Lhasa Consulate in Lhasa. He analyzed that the move was motivated by political, rather than economic interests: "The Indian government hopes to closely watch, observe, and infiltrate the Tibetan area after the opening of a Lhasa consulate, ... The issue regarding Tibet is an internal affair and we won't tolerate any external forces imposing a negative impact on the situation in Tibet."
So, why to have a Nepali Consulate in Lhasa.
This is not sound advice. Zhao Gancheng, who, by the way is often invited by Indian think-tanks, seems unaware of the traditional bonds between Tibet and India.The Indian presence on the Roof of the World is older that the British 'imperialist' (for the Chinese) inroads in Tibet.
One of the best proof is the collections of thousands of 700-year old Sanskrit manuscripts found in Tibetan monasteries by the scholar Mahapandit Rahul Sankrityayan visited Tibet in the 1930's. Such examples could be multiplied.
If the Indian Government had wanted "to watch, observe, and infiltrate" Tibetans, they could have done it long ago, with or without a Consulate General in Lhasa.
It is a pity that Zhao, the India's expert, does not see the good (for China, as well as India and Tibet) that could result of reopening an Indian Consulate Consulate in Tibet.
China should not always listen to advisers, as they often see issues in a narrow nationalistic prism which may please some of the leaders, but will not bring long-term solutions to vexed issues.