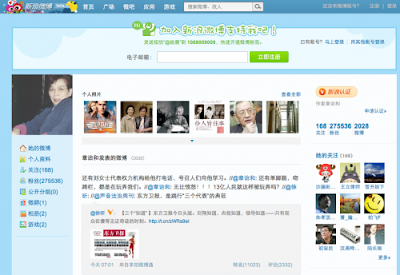 Where is the truth?
Last month, I wrote on this blog,Will Propaganda save China?
The situation seems to deteriorate day by the day.
In China today, ordinary people can never be certain of the veracity of what is reported in the media.
Is it the sign of a healthy society?
It is not only true for new generations of missiles, or defence related information, but also for more worldly stories.
Each and every piece of news is doubted by the 'masses'.
A Chinese blog, The Anti-Social List wrote about: The Party who cried “Wolf!”
The blog mentions the following post by Chinese writer Zhang Yihe (章诒和) about the crippling climate of doubt and credibility created by the control of information in China. The posting was deleted from Sina Weibo soon after it was posted. According to Sina Weibo, Zhang Yihe has more than 275,000 followers,
Zhang had said:


A friend of mine wrote: Was Liu Xiang’s appearance at the Olympics all just a performance? Was Ye Shiwen on steroids or not? Was that really Gu Kailai in the courtroom? Was it really Zhou Kehua (周克华) who was beaten to death? And on and on. This makes one think of the ancient story of the boy who cried wolf, who was lying over and over so no one believed him, until he was eaten himself by the wolf. China’s propaganda machine has cranked out lies for 60 years. Now it has come to the point that anything they say is met with doubt.

Liu Xiang is the hurdler, former Olympic champion and China's idol who abandoned on the first  hurdle in the 110 m hurdle race in London. He apparently knew that he was injured, but was 'told' to participate.
Ye Shiwen is the 16- year old swimmer and Olympic champion whose performance raised many eyebrows in London and elsewhere.
Zhou Kehua is the serial killer who would have been killed by the Chinese police in a much publicized operation.
Gu Kailai is the wife of the former major of Chongqing was has recently been given a suspended death sentence for the murder of a British businessman.
The Walls Street Journal wrote: 'Body Double’ Blocked Online Amid Speculation About Gu Kailai.
The article says:


Sina Weibo, China’s most active microblogging service, and Baidu, its largest Internet search engine, have both blocked the term tishen (替身, literally “body replacement”) after a barrage of citizens began questioning whether the woman shown standing in the courtroom during one of the most sensational trials in recent Chinese history was really Ms. Gu. ...Chinese Internet users have passed around a composite photo contrasting the plump, puffy-cheeked Ms. Gu who appeared at the Hefei Intermediate People’s Court in China’s eastern Anhui province with an earlier image of her in which she appears as the poised, sharp-featured attorney referred to by some as China’s Jackie Kennedy.

The journalist rightly concluded: "By blocking searches online, of course, China’s censors could end up just feeding the conspiracy theories further."
Can we believe what Beijing says about the 'peaceful rise of China' and new delivery systems for its missiles. Probably not!
The most comical is that The Global Times believes that India should follow the Chinese model. A comment in the Party mouthpiece says: "India exodus result of unchecked websites". It argues:


Ethnic clashes in the Indian state of Assam have prompted panic nationwide, causing hundreds of thousands of people to flee from the south of the country where they work. Wary of social networking sites' ability to spread rumors, New Delhi has asked websites including Facebook and Twitter to come up with IP addresses suspected of spreading rumors. ...The scene is familiar to Chinese. What happened in India can help us understand more objectively whether the Internet can foment social instability and how it does so. The exodus was a result of public panic that was easily ignited by rumors. It takes more than working with social networking websites to appease the agitated public and prevent this from happening again.

The Global Times adds: "China's situation is relatively good. It is hard to imagine rumors causing an exodus. The government's reaction and public's ability to discern false information are much better. But the mass of information flowing through the Internet still presents a challenge to governance. The Internet has become deeply integrated in Chinese society, but can still create a disturbance."
Will India emulate China? It would be disastrous.

China develops new generation missiles that can carry 10 nuclear warheads
PTI
Aug 25, 2012
WASHINGTON: China has developed a new generation of inter-continental and submarine launched missiles capable of carrying as many as 10 nuclear warheads, increasing its ability to reach US and to overwhelm missile defence systems.
The US military and intelligence officials say that China has developed the new long range Dongfeng-41 ICBM with mobile launching system making it harder to find and destroy the missile before it is launched, the New York Times said.
But the Global Times - a newspaper controlled by China's Communist Party - disputed Western media reports of Dongfeng-41 tests being carried out last month.
It admitted China was developing the capability to put multiple warheads on its inter-continental ballistic missiles.
The new generation Dongfeng-41 is estimated to have a strike distance of 12,000 to 14,000 kilometers and armed with single, 3, 6, or even 10 multiple independently targetable re-entry vehicle (MIRV) warheads.
The NYT, quoting a Congressional panel, said that US and other western powers might have underestimated the size of China's nuclear arsenal, suggesting that the new reports say that it currently had 55 to 65 ICBM.
The US experts also said that Beijing had separately tested submarine launched missiles in recent weeks, which it could use to outflank American missile defence systems.
The experts also said that China had developed the expertise to mount dummy warheads on some of its nuclear missiles and that these have heat and electromagnetic devices designed to trick defence missile system.
The NYT also said that China was preparing two submarines for deployment each with 12 missiles.
US experts said China's moves to modernise its missiles comes in the wake of it carrying out sea trials of its first aircraft carrier and flight test of its new stealth J-20 jet.
Th NYT said to counter the Chinese build up, US was considering placing additional high-tech radar systems to track Chinese ballistic missiles either in southern Japan or in south east Asia.
Posted by Claude Arpi