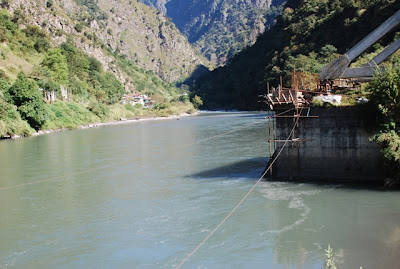 This report in The Times of India states that the Tawang Administration has written to the Dalai Lama to request him to intervene and 'suppress the popular voice' against the construction of some dams.
Rather strange!
The District Administration is probably not aware of the Guidelines for Development and Sustainable Investment issued by the Dalai Lama's government a few years ago.
If Tawang wants guidance from Dharamsala, 'Tibet' can just be replaced by 'Tawang' and 'Tibetans' by 'Monpas'.
Here are the Guidelines issued by the Central Tibetan Administration:

Peoples Party of Arunachal asks Tawang district administration not to suppress anti-dam stir
Times of India
April 11, 2012,
ITANAGAR: The Peoples Party of Arunachal (PPA) has appealed to the Tawang district administration not to suppress the popular voice and democratic movement of the people belonging to the border district against mega dams. The district administration recently wrote a letter to the Dalai Lama asking him to intervene and call on the people not to participate in anti-dam movements.
"Writing a letter for the intervention of the Dalai Lama to stop the anti-dam movement is unethical," the PPA said in a statement on Tuesday. "The Dalai Lama has no role in taking decision on how to use the natural resources of Arunachal Pradesh. People of Tawang should be allowed to decide if mega dams should be built or their land," the party observed.
The district administration's warning that they would "resort to preventive actions to contain the alarming situation" itself is undemocratic, the communique said, adding that people should be allowed to raise issues if their movements are democratic and does not violate the law.
Meanwhile, Bongleng Village Development Society (BVDS) supported the movement of Save Mon Committee (SMC) opposing coming up of power projects in Tawang. BVDS said that construction of so many projects would convert the religious township into a house of tunnel. It urged the authority concerned to treat the voices of people and take up alternatives for the betterment of the local people instead of destroying the landscape and flora and fauna by proposing so many projects.
Posted by Claude Arpi at 7:39 AM

This is certainly a good point you have raised by drawing similarity between the plights of Tibetans and Monpas. CTA is planning to review these guidelines soon and incorporate some more pressing issues facing Tibetans with regard to the development projects in Tibet.