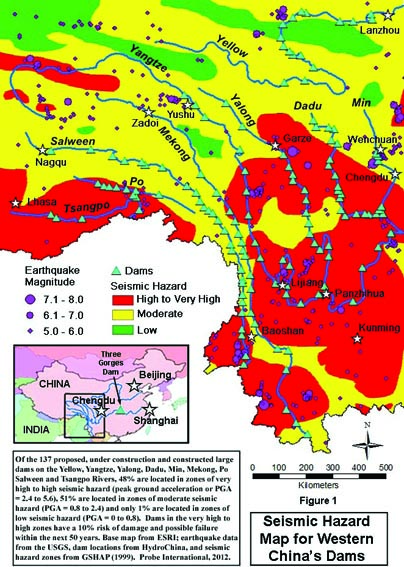 Probe International has published an interesting report about the seismicity of Western China (Tibetan areas administered by Sichuan and Yunnan provinces).
The report says: "98.6% of the dams being constructed in western China are located in moderate to very high seismic hazard zones. The Zipingpu Dam, for example, which is now thought to have triggered the magnitude 7.9 Sichuan earthquake in 2008 that killed an estimated 80,000 people, was built in a moderate seismic zone."
Unfortunately, the study stops north of the McMahon line.
As one can see on the map, the entire area of Nyingtri district, is printed in red (very high to high seismic hazard).
Does the seismic risk stop at the border?
While the Government of India, (along with the State governments of the North East) is planning to built dams with a capacity of some 70 gigawatts in the region, nobody seems to have taken  this 'detail' into account.
In February 2010, an Inter-ministerial Group (IMG) presented a report to the Government of India and though the environment impact was discussed, nothing was said about the seismic danger.
In a chapter on Major Issues in Hydro Development in North East Region, the report mentions the "Environment and Forest Clearances":


Forest conservation Act 1980 requires that compensatory afforestation should be done in non-forest area equivalent to the area of forest diverted for non-forest use.

Other NE States did not raise the issue of compensatory afforestation constraint in hydro power development. All the States will however prepare an inventory of available non-forest and degradable forest land which may be offered for compensatory afforestation. IMG decided that the States may complete this exercise by 31st July, 2010.
The state level environment clearance and forest clearance take a long time resulting in delay in implementation of projects. It was agreed that the State Governments shall facilitate environment and forest clearances of projects at state level.
In order to speed up the process, a Single Window Clearance Mechanism under Chief Secretary of the State may be constituted. The Committee will also monitor and expedite other issues pending with the State government. A time schedule for various steps involved in these clearances at the state level may be firmed up and implemented.
MoEF stated that in view of uniqueness of the fragility of eco- systems in the NER, due importance needs to be given to environment and forests concerns while planning the hydro power projects. It was suggested that Environment Impact Assessment (EIA) studies may be taken basin-wise in place of individual project to know the downstream impact on development of projects in cascading manner and minimum release required to maintain aquatic life downstream. This will also expedite environment clearance of projects. MoEF has already awarded such study for Lohit basin to WAPCOS (I) Ltd. It was decided by IMG that for Siang and Subansiri basin, CWC [Central Water Commission] will get the EIA [Environment Impact Assessment] studies conducted in consultation with CEA and MoEF. Studies in other basins may also be taken up subsequently by ewe. The finalized ToR for above EIA study will be given by MoEF to ewe. However, MoEF will not hold up the Environment clearance of individual projects presently under process for want of basin wise study.

The feverish dam building could certainly also trigger a tsunami in India, but it does not seem to be the concern of the Government, too much money is involved!!

A new report finds more than 130 large dams being built in western China could trigger disaster — earthquakes, even tsunamis — due to their construction in seismic hazard zones.
More than 130 large dams that China is building in its western region, an area of high seismicity, are vulnerable to earthquakes or could induce earthquakes, according to a new report released by the Canadian-based environmental group Probe International. In a worst-case scenario, dams could collapse creating a tsunami that would wipe out everything in its path, including downstream dams, and cause untold loss of life and property.
To pierce the Chinese government’s secrecy over its dam-building, the Probe report overlays a Chinese map of dam locations with US Geological Survey earthquake data and a United Nations’ seismic hazard map. Probe also used Google Earth satellite images to confirm the state of completion of about one-half of the dams.
According to the report, 98.6% of the dams being constructed in western China are located in moderate to very high seismic hazard zones. The Zipingpu Dam, for example, which is now thought to have triggered the magnitude 7.9 Sichuan earthquake in 2008 that killed an estimated 80,000 people, was built in a moderate seismic zone. The force of that quake cracked the dam and shook it so severely that it sank one metre and moved 60 centimetres downstream.
The location of large dams near clusters of recorded earthquakes with magnitudes greater than 4.9, and especially when the earthquake focal points are also close to the surface, "is cause for grave concern," said John Jackson, a geologist and the report’s author.
Earthquakes over M4.9 have been known to damage dams and other structures. Shallow earthquakes (less than 10 km deep) indicate active faults that could be reactivated by routine practices, such as the filling of a reservoir to accommodate flood waters and its drawdown to generate power, he says.
"In addition to the hazard of high natural seismicity in western China, reservoir-induced seismicity is likely to increase the frequency and perhaps the magnitude of earthquakes in this area," he warns.
Western China is known to be a large regional stress field because of the rapid — geologically speaking — northward motion of the Indian subcontinent into western China. This "continental collision" has, for example, lifted seafloor sediments to the top of Mt. Everest and created the Tibetan Plateau. Since detailed recordkeeping began in 1973, nine earthquakes with a magnitude of 4.9 or greater have occurred in western China each year, on average.
Especially worrying in this environment, said Mr. Jackson, is the cascade-like positioning of the dams which follow one another so closely there is no terrain between them for energy to dissipate in the event of catastrophic dam failure.
"If one dam fails, the full force of its ensuing tsunami will be transmitted to the next dam downstream, and so on, potentially creating a deadly domino effect of collapsing dams," he says.
China is the world’s largest hydropower producer with some 87,000 dams and reservoirs (about one-third are hydrodams), of which nearly half are considered to be dangerous and at risk of collapse.
In the interest of public safety and a sound power sector, the Probe International report urges the Chinese government to disclose the details of its current slate of dam construction, and to ensure that a thorough and independent regional seismic risk assessment is done without delay and publicly disclosed.
Chinese citizens are becoming increasingly vociferous in their outrage over lives risked, and lost, to shoddy standards, most recently in the country’s food and high-speed rail industry. Should a dam suffer catastrophic dam collapse, says Patricia Adams, Executive Director of Probe International, that anger would spill over to the hydropower industry for threatening ordinary citizens’ lives with dangerous dams.
John Jackson is a pseudonym for a geologist with detailed knowledge of western China who must remain anonymous.
Posted by Claude Arpi at 8:25 AM