Where is the Panchen Lama? Not in Hong Kong! 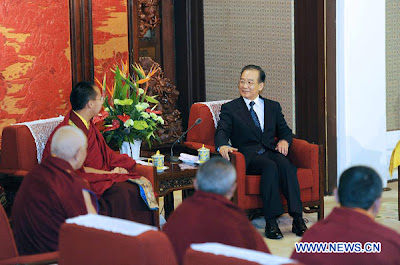 The Chinese Panchen Lama has landed in Hong Kong. The Communist regime in Beijing is eager to show the world that Beijing is a Protector of Buddha Sakyamuni's faith.
A report from Xinhua-ANI states: "The 11th Panchen Lama Bainqen Erdini Qoigyijabu attended the Grand Blessing Ceremony for worshiping Sakyamuni's parietal-bone relic held in the Hong Kong Coliseum on Wednesday afternoon."
Just the way Panchen (Bainqen) is spelled shows the imprint of a colonial power. Panchen means 'Pandita Chenmo' (the Great Pandit).
Is not 'Pandit' an Indian designation for someone 'knowledgeable'?
The press reports continues:


This is the first time that the 11th Panchen Lama makes a public appearance outside the Chinese mainland. Earlier, the parietal bone of Sakyamuni, the founder of Buddhism, arrived in Hong Kong for its first public worship outside the Chinese mainland. A grand and solemn ceremony was held at the airport to welcome the shrine. Wang Zuo'an, director of the State Administration for Religious Affairs and Secretary for Home Affairs of the city's government Tsang Tak-sing presented flowers to the relic.

It appears that the Buddha's bone was 'unearthed' in 2008 when archaeologists discovered unexpectedly a crypt in the ruins of the Changgan Temple during the excavation works at the Nanjing Grand Bao'en Temple.
Xinhua says that: "Buddha's relics are usually well hidden in ancient temples and away from public. Buddha's remains are being highly venerated by Buddhist devotees as national treasure in many historically Buddhist countries and regions."
Are these relics genuine or fake like the Panchen Lama?
Nobody can say. But it is certainly useful as an object of propaganda.
But more serious (or sad) is that this grandiose ceremony attended by 300,000 Buddhist followers coincides with the  23rd birthday of the Panchen Lama selected by the Dalai Lama.
He disappeared at the age 6. Nobody has seen him since then.
Seventeen years in Chinese custody, it is long for a kid!
I have often written on what I consider one of the greatest tragedy of modern Tibet.
I post here the report from Tibetan Centre for Human Rights and Democracy, based in Dharamsala, India.

17 Years and Counting: Disappearance of Panchen Lama
Tibetan Centre for Human Rights and Democracy
25 April 2012,
Today is the 23rd birthday of the 11th Panchen Lama Gedhun Choekyi Nyima, one of the most important spiritual leaders of Tibet, who disappeared into the custody of the Chinese government 17 years ago.
On 14 May 1995, His Holiness the 14th Dalai Lama announced the then six-year-old Gedhun Choekyi Nyima as the incarnation of the 10th Panchen Lama. Three days later, on 17 May 1995, the Chinese government secretly abducted the six-year-old boy and his parents who remain ‘disappeared’ to this day. There is no confirmed information on their well-being or if they are still alive.
Even after 17 years, no one - save the Chinese government - can confirm with reliable accuracy the current whereabouts and condition of the 11th Panchen Lama and his parents. Despite repeated interventions from the representatives of the United Nations Human Rights Council, UN Working Group on Enforced and Involuntary Disappearance, and other governmental and non-governmental organizations calling on China to disclose information on the Panchen Lama, the Chinese government has so far refused to share any detailed information that could shed important light on the Panchen Lama's current state. In its standard response, the Chinese government continues to maintain that Gedhun Choekyi Nyima and his family are in perfect health and that they do not wish to be disturbed.
On 18 October 2009, Zhu Weiqun, the Vice-Minister of the United Front Work Department of the Chinese Communist Party alleged in an interview with a German reporter that the Dalai Lama had destroyed the historical and religious rituals of the reincarnation system and so his recognition of Gedhun Choekyi Nyima was illegal and invalid. Zhu also said, “As for the child recognized [by the Dalai Lama], he is our child, a Tibetan child and our citizen. So we will provide facilities to ensure his healthy growth."
The reporter then asked, “Where is this healthy growth of the boy recognized by the Dalai Lama happening? In Tibet? Will the Tibetan devotees recognize the [Chinese government] approved Panchen Lama?
Zhu replied, “The Dalai Lama’s illegally recognized child is of course growing up healthy in China. He will grow into a useful man to China and to the Tibetan people.”
Gedhun Choekyi Nyima is now 23 years old and must have grown into a healthy young man, as Zhu Weiqun claims. According to the Chinese law, those who are 18 years old and above are considered adults, capable of making their own decisions, responsible for their own lives. For many years, the Chinese government has claimed that Gedhun Choekyi Nyima is in "protective custody" of the Chinese authorities. Now that the boy is an adult, the Chinese government, in the true spirit of the law it drafted, should allow Gedhun Choekyi Nyima to exercise his right to self-determination and let him make his own decisions.
Ten years after the completion of his six-year prison sentence in May 2001, the fate of Chadrel Jampa Thrinley Rinpoche, the former abbot of Tashi Lhunpo Monastery and the head of the Search Party to identify the reincarnation of the 10th Panchen Lama remains unknown.
Chadrel Rinpoche was arrested on 14 May 1995, the day His Holiness the Dalai Lama announced the reincarnation of the 10th Panchen Lama. After being detained incommunicado for two years, on 21 April 1997, the Intermediate Court of Shigatse Prefecture sentenced Rinpoche to six years’ imprisonment and three years’ deprivation of political rights on charges of “plotting to split the country” and “leaking state secrets” during his search for the 11thPanchen Lama.
There is no information on Chadrel Rinpoche except for an unconfirmed report in November 2011 that said Chadrel Rinpoche had died of poisoning.  The Chinese government continues to maintain a deafening silence on Chadrel Rinpoche's whereabouts and current condition.
On the occasion of Panchen Lama's 23rd birthday, TCHRD would like to offer our gratitude to individuals, organizations and governments who have worked tirelessly and offered their steadfast support for the release of the 11th Panchen Lama.
The Centre urges the Chinese government to respect and implement the rights and freedoms enshrined in the Universal Declaration of Human Rights if it wishes to be seen as a responsible, civilized world power.
The Chinese government should go beyond mere words on the condition and whereabouts of the 11th Panchen Lama and provide concrete, tangible evidence to back up its claims.
Holding the Panchen Lama and his family members incommunicado for years is a serious crime that violates multiple human rights enshrined in major international human rights instruments.
Posted by Claude Arpi at 7:05 AM