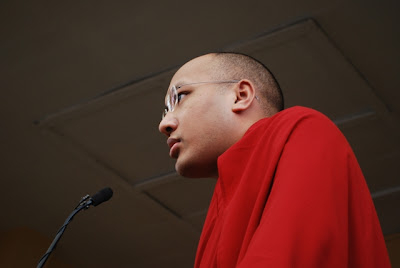 The government of Himachal Pradesh has finally decided to drop the name of the Karmapa from the charge sheet filed in the foreign currency case.
This move is welcome.
However, the dispute with the other 'candidate' is not over. It may take some more time.
As the Karmapa explained to me last year, it is not that simple. There is probably a 'karmic' factor.

My question: In your monastery of Rumtek in Sikkim I was told me that the dispute with Shamar Rinpoche (and Thagye Dorjee, the other 'candidate') is a 'karmic' issue; a time factor is involved and therefore it may take some time to be solved. Would you like to comment?

The Karmapa: You can try to reason it through in such way, but this issue is difficult to reason through. In fact, it is inconceivable for this to have happened. For those who know the history of the Shamar Rinpoche reincarnation lineage and the long history of the Karmapa reincarnation lineage, it seems simply impossible that a situation like this could occur. It is utterly unprecedented in the Karma Kagyu lineage. There was nothing indicating that something like this could happen. As far as the sanctity and integrity of the Karmapa lineage is concerned, it is impossible. Yet it has happened.
From this point of view, one could say that it is a karmic situation. In all fairness, it can't be blamed on one side or one situation exclusively. This could be opened for discussion, but I do not think all the fault lies entirely on one side. By this, I mean that if all people involved had proceeded with integrity, in accordance with the truth of karma, if they had remained harmonious in their vision, this would not have happened. But it has not been so, and thus this has happened.
As far as solving the issue, it cannot be solved as a technical problem by employing some [outer] techniques. The solution must come from "taming of the mind" or proper training of the mind. If one has the ability, one should recall the integrity of our predecessors, the highest standard of their spiritual ethics, and the spiritual vision that they have set for us. To recall this and bring it back into ourselves [His Holiness shows the gesture to bring down the wisdom of the lineage] is the solution. We have to reinstate this integrity [of the lineage] in our minds.


17th Karmapa cleared from currency case
Phayul
April 24, 2012
DHARAMSHALA, April 24: The Himachal Pradesh Government in a ruling today has decided to drop the name of the 17th Gyalwang Karmapa Ogyen Trinley Dorje from a charge sheet filed in connection with the recovery of currency case last year.
“The state government has decided to drop the name of Tibetan spiritual leader the Karmapa from the charge sheet filed in illegal foreign currency case on the recommendation of the Home and Law Ministry,” said an official of the Home Department.
The official further said the Himachal Pradesh government had directed Una's District Magistrate K.R. Bharti to plead the case in this regard through the Public Prosecutor for deleting the name of Gyalwang Karmapa from the charge sheet.
"We have decided to drop all criminal charges against the Karmapa," state Home Office official S.P. Singh was quoted by AFP as saying.
"The police and the government lawyers thoroughly investigated all the charges and found no real evidence to pursue a case against him," Singh added.
Speaking to reporters after the announcement, a senior official at the Karmapa’s office in Dharamshala said the Himachal government ruling was a vindication of their faith in the Indian legal system.
"From the very beginning, we expressed faith in the Indian legal system. We were confident that the truth would prevail," the official said.
The Karmapa Office of Administration has maintained that the 17th Karmapa “has no involvement, direct or indirect, in the financial administration of the office or trust.”
They have further clarified that the money seized by the Indian authorities from the monastery represented unsolicited donations offered by the followers of Gyalwang Karmapa from around the world to enable the substantial social and spiritual programmes of the Karma Kagyu order.
The 17th Karmapa who turned 26 last year has been living in Dharamshala, northern India since he made a daring escape from Tibet in 2000 after Chinese authorities increasingly restricted his ability to travel and teach his disciples, and to receive transmissions from his lineage teachers.