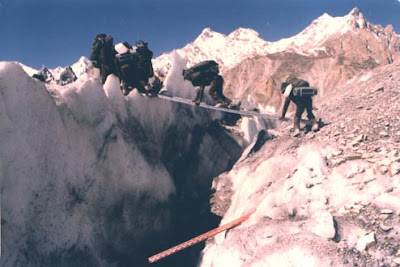 The Boss of Pakistan says: "It's time to resolve the Siachen issue", but what General Kayani forgets is that the Siachen issue was 'solved' long ago, in fact, in July 1949.
I reproduced here an article that I published 7 years ago on the subject. 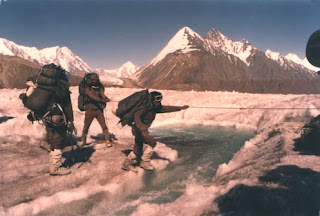 Calling for demilitarisation of the Siachen glacier for the development of Pakistan and environmental reasons, Chief of the Army Staff (COAS) Ashfaq Parvez Kayani on Wednesday advocated peaceful coexistence with India, adding that the civil and military leaderships of the two countries should discuss ways to resolve the issue.
Interacting with journalists at Skardu after visiting Gayari — the site of the avalanche in Siachen that buried 124 soldiers of the 6 Northern Light Infantry and 11 civilians early on April 7 — General Kayani said Pakistan was not manning those treacherous heights out of choice. “The world knows why we are in Siachen,” referring to the Pakistani narrative that it was India which started this dispute in 1984.
“This conflict should be resolved. How it is done is to be decided by the military and civil leaderships of the two countries,” General Kayani said, pointing out that the issue had been discussed several times. “Sometimes we get close to a resolution but then issues come up.”

Defence budget
Maintaining that peaceful coexistence between the two neighbours was very important, the COAS said the Army understood well the need to bring down the defence budget. “We in the Army understand very well that there should be a very good balance between defence and development because ultimately security does not only mean secure borders but the welfare of the people. We would like to spend less on defence; any country should do the same way.”

Global problem
About the harm caused to the environment by the military occupation of the Siachen glacier, General Kayani conceded the point. “This is the glacier that feeds our rivers, particularly the Indus. We understand that physical deployment of troops will affect our rivers and water management is needed.” In fact, according to him, the effect of militarisation of Siachen on the environment was not just a local issue but a global problem.

Retrieval of bodies
As to how long the Army proposed to continue with the ongoing operations to recover bodies of the men buried under 80 feet of snow, the COAS said that till every man was located. “If we have to take out this mountain, we will do that. It is not time-bound. We are not going to give up on this,” he asserted, pointing out that the highest Pakistani post in Siachen was at a height of 22,300 ft, where the soldiers survive without oxygen and proper heating.
Posted by Claude Arpi at 6:04 AM