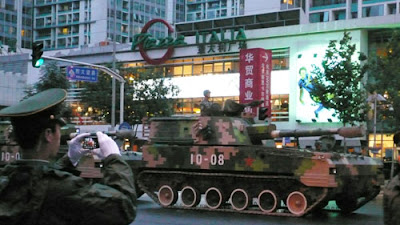 There are coups and coups.
In India, the movement towards Delhi of some units of 1 Corps, based in Mathura, has been the objects of many TV debates and analyst's speculations.
China also had its own rumor of a coup (not involving the army like in India, but the paramilitary forces).
In China, the rumor of a coup may have been related to the power struggle at the top of the Party, more particularly to Bo Xilai and Zhou Yongkang, the powerful Chinese politician.
A Taiwanese publication explained:


According to an unnamed Beijing source, Zhou Yongkang, a member of the elite nine-member Politburo Standing Committee, secretly promised to help Bo join him in the country's most powerful decision-making body and take over his role as secretary of the Political and Legislative Affairs Committee. This would have allowed Bo to control the People's Armed Police and Ministry of Public Security, and force Xi to step down before inserting himself in the vice president's place as expected future general secretary, the source said.

Mingjing also reported that Bo, through Wang and in the name of Chongqing's Public Security Bureau, purchased 5,000 rifles and 50,000 rounds of ammunition from a local munitions factory last year in order to create a private army. The People's Armed Police has already been sent to Chongqing to investigate the whereabouts of the weapons, the report said.

Another Mingjing News 'revelation' suggests that since Chinese New Year, Bo had been using his influence over domestic and international media to heighten attention on the forthcoming 18th CPC National People's Congress, where [Vice-President] Xi [Jinping] is expected to succeed Hu Jintao, current president and general secretary. Mingjing alleges that this was part of Bo's inside-outside assault to destabilize Hu, Xi and Premier Wen Jiabao while inserting himself into the leadership conversation.

Different countries, different reactions.
While India keeps discussing the issue, China acts.
The People's Daily commented: "If we allow the rumors to run amok, it will seriously disrupt the social order and stability and endanger social integrity." Xinhua's titled "Resolutely Say 'No' to Rumors and Their Followers", affirming "those who fabricate or spread rumors are not law-abiding. Making 'jokes' about important matters of social security and stability demonstrates a lack of responsibility toward society and toward themselves. It is very harmful."
It is harmful for the Party!
As a result, popular Chinese microblogging sites Sina Weibo, QQ Weibo and the bulletin board of the search engine Baidu, were blocked. They had dared mentioning the rumors.
The Guardian wrote: "China has intensified online censorship by closing 16 websites, taking the toughest steps yet against major microblogs and detaining six people for spreading rumours of a coup amid Beijing's most serious political crisis for years."
Now, Sina and Tencent, the organisations which operate China's most popular versions of Twitter with hundreds of millions of microbloggers, had pledged to strengthen their managements after being "criticised and punished".
No comment anymore in China, while in India we will keep discussing, without of course, going to the root of the problem!
In both cases, the root cause is Corruption.


Senior UPA minister behind coup report?
Zeenews Bureau
April 05, 2012,
New Delhi: Even though the government has rubbished the news report on "unusual" movement of two elite Army units towards Delhi in mid-January, the issue seems to be far from over as another newspaper, Thursday, claimed that a senior minister in the UPA government was behind the suspected coup attempt story.

As per The Sunday Guardian, a senior minister was the ‘mastermind’ behind the story aimed at aggravating the ‘friction’ between the political establishment and Army Chief VK Singh.
Quoting sources, the newspaper claimed that the minister is connected - through his close relative - with the defense procurement lobbies, who have been at loggerheads with the Army Chief.
The minister expected the political class to unite against the Army Chief at the very mention of a Pakistan-like situation in India, the report said.
However, the minister miscalculated the response of Prime Minister Manmohan Singh, who called the troop movement story as “alarmist” and that of Defence Minister AK Antony, who slammed attempts to question the patriotism of the armed forces.
The minister had assumed that Prime Minister and the Defence Minister would decline to comment on the report, thereby increasing the pressure on Army Chief to quit.
The Sunday Guardian claims that a close relative of the minister in question has been regularly meeting with arms merchants and their lobbyists during his many visits abroad.
Dubai, London and Bangkok are the three locations where the arms lobbyists usually ‘entertain’ VVIPs from India, the report added.
However, the entire episode has posed serious questions about the extent of the reach of arms lobbyists in the establishment. A senior minister playing into the hands of arms lobbyists is a development which would reverberate in the political circles and cause further unease to the Manmohan Singh-led government.
Meanwhile, Intelligence Bureau sources told Zee News that Prime Minister Manmohan Singh has been informed that a group of lobbyists were trying to plant "alarmist stories in a bid to discredit the Army Chief".
The IB has told the PM that the row between the Army Chief and MoD has divided the Army in to two camps and brigadiers are almost functioning as "moles" leaking information to the media and the arms lobbies.
Posted by Claude Arpi at 8:11 AM