Nice Roads, but no vision, please! 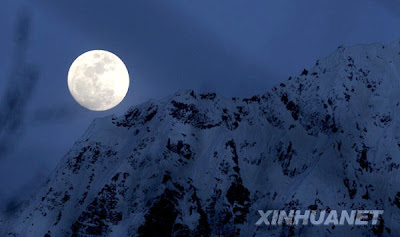 According to Xinhua, the Chinese government has decided to build roads leading to most of the remote monasteries of Tibet.
The official statement said that road access to every monastery of the Tibetan Autonomous Region is expected to be completed by 2020. Beijing is planning to spend 238 million dollars on the project.
Officially, it will, of course, be for the 'welfare' of the monks and nuns.
It is a clever scheme, as it will allow the People's Armed Police to reach faster most of the religious places and monitor better the restive monks and nuns.
Will it be accounted in the budget as 'Religious Welfare' or 'Defence Expenditure'? I bet on the first one.
In the meantime Tibet.net in Dharamsala reported that Phurbu Namgyal, a youngster from Lhundup district near Lhasa, "recently saw a reflection of His Holiness the Dalai Lama in the moon ."
The young Tibetan confided his experience to his friends; he told them that if someone gazes in the night sky, he could see the Dalai Lama in the moon. When his friends assembled to look at the moon to have a glimpse of the their revered leader, the Public Security Bureau (secret police) picked up Phurbu Namgyal. He was told that he committed 'an illegal act'.
The report says: "His whereabouts and well-being remain unknown".
It is better not to look in the moon in Tibet! 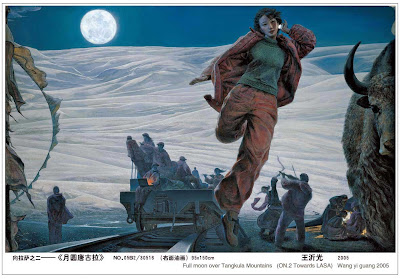 By the way, do you know Wang Yiguang?
Wang is a Chinese painter who worked for sometime on the railway line to Lhasa.
He is famous for his 'Tibetan' paintings of flying people, yaks and sheep. After his visit to Tibet, he wrote:


I have been able to visit the Tibetan plateau a number of times. I've been deeply touched by the breathtaking landscape of Tibet and the happy-go-lucky spirit of the Tibetan people. The Tibetan people's profound regard for the natural world and animals has also cast a life-long impression on me. Their unwavering optimism, all-encompassing and peaceful way of life, are in extreme contrast with the psychological states of modern city dwellers. In my works of life on the Tibetan Plateau,

I focus more on movement, so as to convey the beauty of extreme tension and moments of life. When I was in Tibet, I spent a lot of my time lying down in the grass, as I suffered from acute mountain sickness. As I lay there gasping for air, a delightful picture revealed itself before me: a couple of young, spry Tibetan girls racing about the countryside with their herd of yaks. These Tibetan girls reminded me of 'Feitian', the flying Devi, when they are still earthly beings. The fairy tale relationship between man and yak, also called 'ship of the plateau', came to life right before my eyes. In my series of paintings on the Tibetan plateau, I try to convey the unique psychological journey I experienced during this time. Similarly, these feelings surfaced through long periods of 'observing and reflecting'. This dream-like state has in turn added a romantic dimension to my works, which can be seen in paintings such as "Sun in a Distant Place" and "Towards the Sun". By applying surrealistic elements the transfer of images can be fully articulated.

Wang does not say what he saw the Dalai Lama flying in the moon. 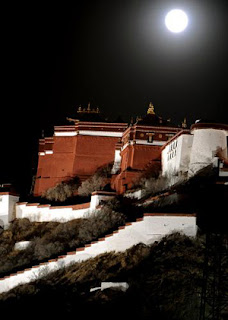 Tibet to spend 1.5 bln yuan building roads to monasteries
2012-04-08
Xinhua
Southwest China's Tibet autonomous region will earmark 1.5 billion yuan (238 million U.S. dollars) on road construction for easier access to the region's monasteries, traffic authorities said Sunday.
By 2015, asphalt roads will to be extended to more than 70 percent of the region's monasteries with the help of the funds, said a written statement issued by the region's traffic transportation department.
Road access to every monastery of the region is expected to be available by 2020, the statement said.
Tibet has more than 1,700 registered monasteries and venues for religious activities with about 46,000 monks and nuns, government statistics show.
The plateau region is known as "the roof of the world" with an average altitude of over 4,000 meters, and road construction is more difficult and costly than other parts of China.
Posted by Claude Arpi at 8:29 AM