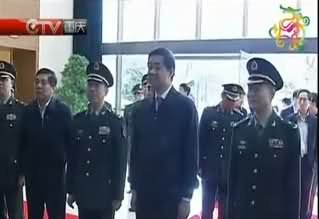 As this article of the South China Morning Post shows, Bo Xilai, Chongqin former Party boss has (had?) very close relations with the 14th Group Army based in Kunming in Yunnan as well as the Chengdu Military Region looking, amongst others, over  the Tibetan 'stability' and the border with India (see map).
Early February,  Bo Xilai paid a visit to Kunming to inaugurate an exhibition organized by the 14th Group Army, founded by his father Marshall Bo Yibo.
It is said that it was Bo Xilai's 8th visit to Yunnan and the 14th Group Army.
There are different definitions of a Group Army, but it usually corresponds to a Corps. The People’s Liberation Army has 18 regular 'Group Armies'. Each of the PLA’s seven military regions is assigned with 2 or 3 group armies.
The fact that General Guo Boxiong , vice-chairman of the Central Military Commission, had to go to Chengdu and speak to the senior Army staff there tend to prove the seriousness of the situation.
On March 28, 2012, the People’s Liberation Army General Political Department and China’s National Defense University issued a communique about the importance of utmost discipline in the PLA.
The article stated that regardless of the changes and new challenges ahead, the military must be under the absolute leadership of the Party and “firmly follow the orders of the Party’s Central Committee, the Central Military Committee, and President Hu, under all circumstances.” If the military is not politically correct, “it will likely lose direction amidst complex and confusing political struggles. … For every Party member, following the Party’s discipline is a political requirement; the most important requirement is to be in compliance with political discipline.”
India should closely follow L'Affaire Bo which has a lot of ramifications for its own security. 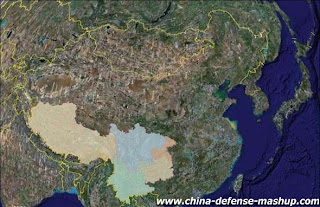 Bo's links to armed forces probed
South China Morning Post
Choi Chi-yuk
Apr 15, 2012
Bo Xilai has long had a close relationship with the military.
Links between senior officers in the Chengdu military region and the disgraced Chongqing party boss Bo Xilai are being investigated by five inspection teams sent in by the Central Military Commission, which controls China's armed forces.
Bo, who is embroiled in China's most serious political scandal in decades, is well known for his close ties with the People's Liberation Army.
Last week he was suspended from the powerful politburo for "serious violations of party discipline" and his wife and an aide are being investigated for the murder of a Briton, Neil Heywood, with whom she had business dealings.
The Sunday Morning Post has also learned that two more senior police officers in Chongqing have been detained for their roles in an alleged cover-up of the Heywood case.
The Chongqing Daily, mouthpiece of the municipal government, meanwhile hinted Bo could face criminal charges - the first time the state media has said as much.
Xinhua yesterday reported that General Guo Boxiong , vice-chairman of the Central Military Commission, visited the Chengdu Military Command recently and delivered a strongly worded warning to military personnel not to listen to or circulate political rumours.
Guo called on the military to "closely rally behind the party's central leadership led by Comrade Hu Jintao ". Guo also said the army should take precautions against "any serious incident that may disturb the overall situation".
It remains unclear if Guo's visit was related to the probe.
A source in Chengdu said: "Five task forces have been sent to the Chengdu Military Command to look into whether, and to what extent, any senior officers and troops were involved in Bo's case."
The source gave no details of who was being investigated, but there has been speculation that several generals in the Chengdu command are close friends of Bo.
The Chengdu Military Command oversees the southwest, including Chongqing; the provinces of Sichuan , Yunnan and Guizhou ; and the politically sensitive Tibet Autonomous Region .
The same source said there was intense speculation that senior officers of the 14th Group Army, based in Kunming , the capital of Yunnan, were being investigated by the Central Military Commission.
The 14th Group Army was founded by Bo's late father, Bo Yibo , one of the so-called eight immortals of the revolution, a title granted because of his influence and status in the Communist Party.
Bo Xilai made a high-profile visit to the 14th Group Army the day after the attempted defection of Wang Lijun , the Chongqing police chief and vice-mayor, at the United States consulate in Chengdu was made public. Wang's visit to the consulate on February 6 triggered the crisis surrounding Bo.
Bo has a close relationship with the army. Chongqing journalists said Bo stayed in a PLA garrison for his own safety during the early stages of his crackdown on organised crime in the municipality two years ago. Last month, when Bo made his last public appearance in the National People's Congress, PLA delegates shook his hand and saluted him as he stood on the podium in front of hundreds of journalists, hours after Bo gave a two-hour press conference that turned out to be his swan song.
The Chongqing Daily yesterday ran a commentary saying both Bo and Wang Lijun had broken the law - the first hint that Bo may face criminal charges. "People like Bo Xilai and Wang Lijun have violated the law and party discipline … and seriously tarnished the image of the country and the party," it said.
Meanwhile, Guo Weiguo , the deputy police chief of Chongqing, along with the head of the municipal criminal police team, Li Yang , were detained for investigation early this month on suspicion of covering up details of the Heywood murder case, according to a source in Chongqing, who said officials above county level were notified.
British newspaper the Daily Mail has reported that Wang Lulu, Heywood's widow, visited the British embassy in Beijing seeking its help to leave for Britain with her two children because she feared for her safety.
In a written reply yesterday to the Post, Britain's Foreign Office said: "We are continuing to provide the full level of consular assistance we would in the case of a British national's death overseas. However, we are not able to comment on the personal details of Mrs Heywood."
At the same time, there are conflicting reports as to the whereabouts of Bo Guagua , the Oxford- and Harvard-educated son of Bo Xilai. The Daily Telegraph in London reported that Bo had been taken away by US law enforcement officers from his residence at Harvard on Thursday. But he is also said to have returned to Beijing some time ago.
chiyuk.choi@scmp.com Copyright (c) 2012. South China Morning Post Publishers Ltd. All rights reserved.
Posted by Claude Arpi at 7:18 AM