Jampel Yeshi: 'The day has come to sacrifice your life' 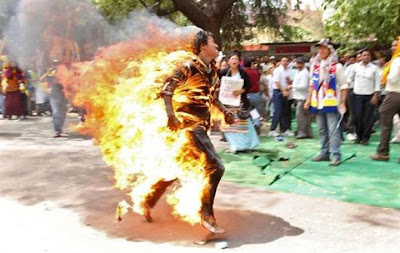 My article on Jampel Yeshi is posted on Rediff.com

The death of 26-year-old Jampel Yeshi, who immolated himself in New Delhi last week, makes it clear, says Claude Arpi, that the regime in Beijing has utterly failed to extinguish the Tibetan fire for freedom.
Jampel Yeshi has become 'Pawo' Jampel Yeshi, the hero.
The 26-year-old Tibetan youngster who immolated himself on March 26 in New Delhi during a demonstration against Chinese President Hu Jintao's presence at the BRICS Summit, was given a 'national' funeral in Dharamsala, the seat of the Central Tibetan Administration of the Dalai Lama.
The picture of the young native of Tawu from the Kham province of eastern Tibet was splashed on the front pages of hundreds of publications around the world.
After Yeshi had set himself aflame, he ran several metres in front of journalists and policemen at Jantar Mantar.
With 98 per cent burn injuries, he survived for a day, raising hope among his supporters; unfortunately, he passed away a day later.