Report of the Officials on the Border 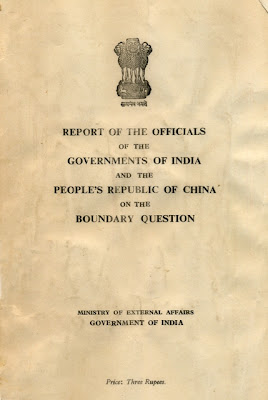 Though the last round of the Special Representatives of India and China on the border issue was postponed by Beijing on the lame pretext that the Dalai Lama was to address the Global Buddhist Conference in Delhi, the fact remains that the intricacies of the border issue are generally not well understood in India (and in China, I presume ).
To get a better understanding, one can read the 1960 Report of the Officials of the Governments of India and the Peoples’ Republic of China on the Boundary Question.
I am posting here the Introduction.
The first part of the Report published in 1961 by the Ministry of External Affairs is posted on my website.During the coming days, other parts will be online.
The reading of this Report along with The Notes, Memoranda and letters Exchanged and Agreements signed between The Governments of India and China. known as The White Papers (some are also posted on my site) helps to understand why after more than 50 years of 'talks', very little progress has been made on the border issue.

2. The Joint Communiqué issued on the 25th of April 1960 at the conclusion of the talks of the Prime Ministers in Delhi embodied their decisions and served as a broad directive for the official teams who were to undertake the examination envisaged by the Prime Ministers. The Joint Communiqué inter alia stated as follows:
The two Prime Ministers, therefore, agreed that officials of the .two Governments should meet and examine, check and study all historical documents, records, accounts, maps and other material relevant to the boundary question, on which each side relied in support of its stand, and draw up a report for submission to the two Governments. This report would list the points on which there was agreement and the points on which there was disagreement or which should be examined more fully and clarified. This report should prove helpful towards further consideration of these problems by the two Governments.
It was further agreed that the officials should meet from June to September, 1960, alternately in the capitals of the two countries. The first meeting should take place in Peking and the officials would report to the two Governments by the end of September, 1960. During the period of further examination of the factual material, every effort should be made by the parties to avoid friction and clashes in the border areas."

4. The officials of the two teams have held three sessions in fulfillment of the assignment given to them. In accordance with the communique, the first session of the meeting of officials took place in Peking from the 15th June to the 25th July during which 18 formal meetings were held. At this session the agenda pattern was discussed and determined, and the first item of the agenda (Location and Natural Features of the boundary) was completed.
The second session was held in Delhi from the 19th August to the 5th October during which 19 formal meetings were held. At this session discussions on the second item of the agenda (Treaties and Agreements; Tradition and Custom) and the third item (Administration and Jurisdiction) were completed, thereby concluding the entire substantive work of examining the factual material in the possession of the two sides.

5. The Joint Communique envisaged that the officials should complete their assignment by the end of September, but the two teams realised that despite their determined efforts, the assignment given to them, because of its size and scope, could not be completed within the stipulated period. Therefore, on the 24th of September the leaders of the two official teams dressed a joint message to the Prime Ministers of the People's Republic of China and the Republic of India requesting them to extend the prescribed time-limit to the minimum extent necessary. The two teams agreed to continue in session to complete the substantive work in Delhi and suggested that after a short break a third session might be held for the purpose of completing the work and finalising the report for submission to the two Governments.

6. The Prime Ministers of the two countries were pleased to agree ~o this extension and, after mutual consultations between the two Governments, it was decided that the third session be held in Rangoon. The Burmese Government were good enough to agree to the request of the two Governments and made the necessary arrangements for holding the meeting in their capital.

7. The third and final session of the talks started at Rangoon on the 7th of November and after 10 formal meetings concluded today with signing of this report.

8. The task assigned to the officials, though limited to the study of the evidence and the documentary material in support of the stands of the two Governments, was nevertheless voluminous and difficult. Moreover, the Sino-Indian Boundary question has an obvious bearing on the friendly relations between the two neighbouring countries. The two teams were fully conscious of the complexity as well as the importance of the assignment which had been entrusted to them. The following report embodies the earnest and sustained labours of the Chinese and the Indian official teams spread over a period of nearly six months. During the discussions, each side not only furnished factual material to' substantiate and elaborate the stand of their own Government but endeavoured to explore the viewpoint and evidence of the other Government. It is hoped that the report will enhance the understanding of the facts relating to the Sino-Indian boundary and prove helpful to the further consideration of the boundary question by the two Governments.

9. The report is formulated in accordance with the framework which was agreed upon after consultations between the two teams. The first part of the report is an introduction summarising the discussions which led to the adoption of the agreed Agenda and the commencement of the substantive examination of the evidence. The second and third parts contain the summary of the factual material and comments brought forward by the Indian and the Chinese sides respectively in support of the stands of the two Governments. It will be observed that the statements and comments of each side in the report were drafted by the side concerned and faithfully explain each side's understanding of the factual material furnished and the discussions held during the meetings. The actual pattern within the' substantive part of the report corresponds to the framework of the agreed Agenda.

10. The two teams would like to record that notwithstanding the difficulties of the assignment and the differences in the understanding of the facts relating to the question, they worked in harmony and in a spirit of cordiality and co-operation throughout these meetings.