While more and more 'serious' analysts have begun predicting that China will soon be the Number 1 Super Economic Power of the planet, turmoil and unrest are increasing by the day in the Middle Kingdom.
The repression is often ferocious as we can see from this video which has recently emerged on YouTube. It was shot during the months of March/April 2008, near Sera Monastery in the outskirts of Lhasa.
According to The International Campaign for Tibet:


The footage shows a total of eight people – seven men and one woman – being detained, although a list that appears in the hands of police in the video suggests police were targeting at least ten people for detention. The sheer display of force to detain these unarmed individuals, who are mostly in bed at home when the police arrive, is notable; the video shows personnel from at least three branches of the police involved in the sweep.

The security personnel in black uniforms and helmets, many of whom are carrying assault weapons – and who appear to be leading the operation – are Special Police, although some are also seen carrying long sticks; several of whom have plain clothes beneath their vests and helmets, and not all of these personnel appear to be armed. The normal civilian police are involved, identified in some instances by the characters “Jing Cha” and “Police” in English on their vests; while those in green camouflage uniforms and black helmets often seen carrying only a truncheon, are from the People’s Armed Police Border Defense, according to the characters clearly seen on the sides of their helmets throughout the video. 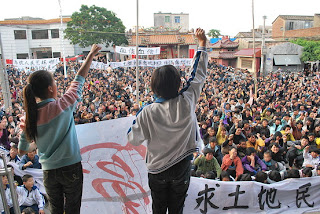 Last week, Michael Bristow reported for BBC News about a grave incident between villagers and the authorities in a village of the southern province of Guangdong. Bristow said:


Police have blocked roads leading to the village of Wukan. Local people are trying to keep them out. The row - over village land taken by the local government - has been simmering for some time.
A new wave of protests broke out several days ago after the death of a villager while in police custody.
It is not easy to get information about what is going on in the area. One local official denied there was a problem.
But it appears that villagers have held a series of protest rallies over recent days involving hundreds of people.
A video of one demonstration, posted online, shows angry protesters shouting slogans such as "Down with corrupt officials.

Someone told Bristow: "We will continue our fight until the end."
Since then, 'Silence': it is so serious that the incident has been blocked on Internet sites, blogs and microblogs. 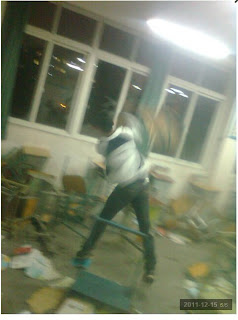 Even more ominous is an incident between Han Chinese and Tibetans in Chengdu, the capital of Sichuan Province.
Some 3000 Chinese students went on a rampage on December 15, beating Tibetan students and breaking into their dormitories and class rooms at the Railways Vocational Institute.
Tibetan poetess Woeser reported on her blog:

The incident took place at a Chinese railway engineering vocational institute in the provincial capital city of Chengdu. Around 200 Tibetan students were held hostage as 3000 Chinese students attacked their dormitory, trashing the Tibetan students and breaking the doors, windows, and furniture. The Chinese students shouted 'Beat a Tibetan, Get an extra credit,’ and broke the doors of the Tibetan dormitories in the institute.
Many Tibetan students have been reportedly hospitalised carrying severe injuries. After the school authorities failed to quell the clashes, police had to be called to control the situation. More than 1000 People’s Armed Police personnel arrived at the scene and reportedly hurled tear gas to disperse the crowd. Several police and school vehicles were also damaged in the clashes.

It appears that when then Tibetans students came for lunch at the school mess the next day, the Chinese students started shouting: ‘Han Chinese have been victorious over the proud Tibetans’.
This demonstrates the seriousness of the ethnic tensions between Han Chinese and other 'minority' groups.
China has today become World No 1 for unrest and riots (all categories).
Posted by Claude Arpi at 7:38 AM