'I cut my leg off and ordered: 'Go and bury it' 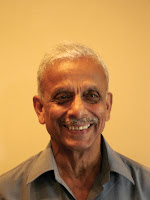 Here is the second part of my interview with Major General Ian Cardozo who was a young major in the 5 Gorkha Rifles in the 1971 war with Pakistan.
In a swift military offensive, India defeated Pakistan within 13 days, liberated a region and led to the creation of Bangladesh.
In the war, the then Major Cardozo stepped on a landmine and had to cut off his badly wounded leg with his own khukri.
Yet, through sheer will power and determination, he did not let his disability come in the way of his duty as a soldier and went on to become the first disabled officer in the Indian Army to command an infantry battalion and a brigade.

Click here to read.
Posted by Claude Arpi at 2:40 PM