Have you heard about this Indian Hero?

My article on Colonel Chewang Rinchen is posted on Rediff.com.

Major Chewang Rinchen became the youngest recipient of the Maha Vir Chakra (MVC). He not only seized the highest post ever captured, but also liberated an area of 800 sq km from Pak occupied Kashmir, the largest area captured in the 1971 war with hardly any supplies and no artillery support.
Claude Arpi salutes this brave Indian soldier.

Have you heard of Colonel Chewang Rinchen?
In 1948, at the age of 17, Rinchen enrolled in the Indian Army; the same year, he won his first Maha Vir Chakra, becoming the youngest recipient of the prestigious decoration.
Born in 1931, Chewang could have spent his entire life in the remote village of Sumur, at the confluence of the Shyok and Nubra rivers. But the visit of the Kalon (minister) of Ladakh changed the course of his life.
The official spotted the spark in the 13-year boy and after gaining the approval of his parents, decided to take him to the Leh to educate him.
Four years later, in one of the most daring operations of the 1947-1948 War, Captain Prithi Chand and a few of his Lahauli companions saved Leh by reaching the Ladakhi capital before the Pakistani raiders: They had done the impossible, cross the Zojila pass in winter.
The captain soon became the mentor of the young Rinchen, who underwent a short military training under him. Rinchen then recruited 28 of his friends from the Nubra Valley and created the Nubra Volunteer Force. They were to play a crucial role in 1947-1948 War.
In April 1969, Major Chewang Rinchen was finally given a regular commission in the Indian Army and was posted with the 14 J&K Rifles. His battalion was soon transferred to Firozpur in Punjab.
But when the heat of the summer became too unbearable for the young Nunnu (name given to the natives of the Nubra Valley), he applied for a transfer back to the Ladakh Scouts. This was granted.
In August 1971, as the clouds were gathering over the Indo-Pakistan border, Rinchen joined his old regiment; he was sent again to his beloved Nubra Valley. 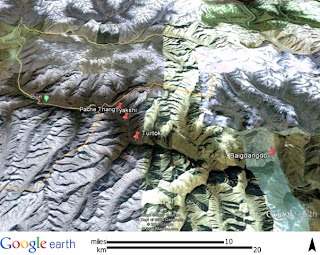 A month later, Rinchen started reorganising the Nubra Guards, giving them a special training in firing small arms. He enrolled 550 young local volunteers and organised them into four companies (called by the names of the nearby ranges Karakoram, Saser, Remo and Saltoro). Their training lasted two weeks from November 1 to 15.
Major General S P Malhotra, the General Officer Commanding of 3 Infantry Division responsible for the defence of Ladakh, then asked Rinchen and Colonel Udai Singh, his commanding officer, if they could look after the Nubra/Shyok sector of the border.
Rinchen confidently told his GOC that the Ladakhi Scouts and the Nubra Guards did not need any additional forces; they would do it.
Situated 140 km north of Leh, the Nubra Valley was linked to the capital of Ladakh via the Khardung La, the highest motorable pass of the planet at 5,602 metres.
The army base for the sector was located at Partapur in the Valley and since 1960 an airfield had been opened at Thoise (still today the base camp for the operations on the Siachen Glacier)

Click here to continue...
Posted by Claude Arpi at 3:41 PM