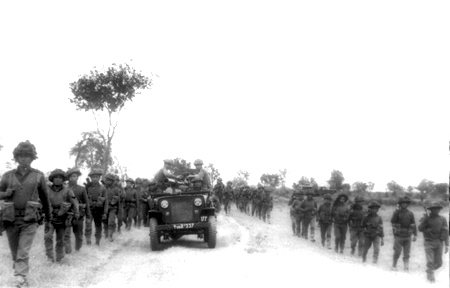 My interview of Maj Gen Ian Cardozo is posted in Rediff.com under the title 1971, A War Hero Remembers.
In the second part of the interview, General Cardozo will tell us how after he walked on a mine, he amputated himself with his khukri.

On December 3, 1971, Pakistan attacked several Indian Air Force stations in the West. At midnight, Indian Prime Minister Indira Gandhi in a broadcast to the nation declared that India was at war with Pakistan. Inset: Major General Ian Cardozo
War Hero Major General Ian Cardozo (retd)was wounded in the battle of Sylhet in Bangladesh in the 1971 war with Pakistan.
He lost his leg in a landmine blast, but conquered his disability and became the first disabled officer in the Indian Army to command an infantry battalion and then a brigade.
Awarded a Sena Medal for gallantry, General Cardozo is presently Chairman of the Rehabilitation Council of India and has authored The Sinking of INS Khukri -- Survivors Stories and Param Vir -- Our Heroes In Battle.
In conversation with Claude Arpi, the general looks back at the war where more than 93,000 Pakistani prisoners were taken, a region was liberated and a new nation born.
A young major 40 years ago, he recounts the heroic battles fought by the Fifth Gorkha Rifles in the Eastern theatre, where he and a brave band of men played a pivotal role in the defeat of Pakistan. 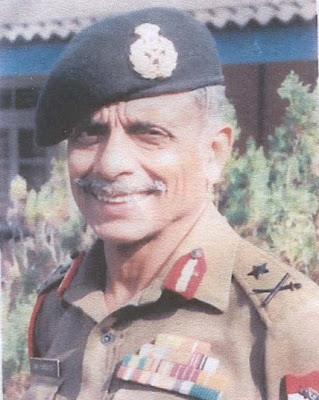 We are celebrating 40 years of the most resounding victory of the Indian armed forces, tell us about your involvement in the 1971 Operations and the role of your battalion, the Fifth Gorkha Rifles.
I was in the Staff College doing a course. My battalion was already on the front. The second-in-command (known as '2IC') of the battalion had been killed; the army had to replace him.
They looked around and found this guy (then Major Cardozo) in the Staff College. My posting was cancelled and I was sent to the front.
I was permitted to drop my family back home (my wife and three sons). I returned to Delhi by train on December 3.
The war had already started, but we did not know, though we heard aircraft flying above us. In Delhi there was a blackout. Next morning, I went to Palam airport to catch the plane to Assam, but it was cancelled: it would have been a lovely target.
I jumped into a taxi, rushed to the railway station. The train was moving out of the platform, I managed to pull the chain and board it. The next night we reached a place called Dharmanagar. We have a wonderful system in the army of contractors. Over 150 years the same family of banias have served particular units in the army. One of them was there to meet me.
He said: 'Sahib, the hospital train is coming. Wounded officers from our unit are on that train, you should meet them.' I met four young badly wounded officers and then jumped into a jeep and drove night and day to reach my battalion.

Click here to read the entire interview.
Posted by Claude Arpi at 5:12 AM