Leadership’s control of thought is the most important 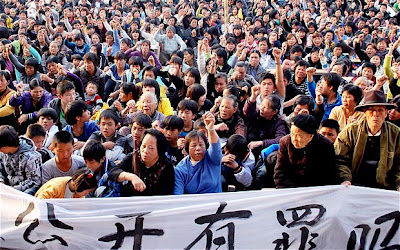 
One evening early this year, a red Ferrari pulled up at the U.S. ambassador's residence in Beijing, and the son of one of China's top leaders stepped out, dressed in a tuxedo. Bo Guagua, 23, was expected. He had a dinner appointment with a daughter of the then-ambassador, Jon Huntsman.
The car, though, was a surprise. The driver's father, Bo Xilai, was in the midst of a controversial campaign to revive the spirit of Mao Zedong through mass renditions of old revolutionary anthems, known as "red singing." He had ordered students and officials to work stints on farms to reconnect with the countryside. His son, meanwhile, was driving a car worth hundreds of thousands of dollars and as red as the Chinese flag, in a country where the average household income last year was about $3,300.

This is probably was is known as 'socialism with Chinese characteristics'.
Whether or not, Bo Xilai is be able to make it to the Standing Committee of the Politburo (one of the nine bosses of China) in 2012, the problem will remain the same.
As we have seen in my previous posting, China is in turmoil and it is not ideology that will convince the people of China that their leaders are not sincere.
It is like in India, ministers exploiting mines in Jharkand, Goa or Karnataka, telling the people: "Anna Hazare is not representing the people. We are the legitimate representatives".
Who believes them?

Maintaining Tight Control over Ideology
22 November 2011
Chinascope
[Editor’s Note: Qiushi Journal republished an article from the Contemporary World and Socialism magazine on the Chinese Communist Party’s (CCP’s) control over ideology work, which includes establishing, deciding on, shaping, and disseminating ideology. [1] The author, Wang Yonggui, is a scholar at the School of Marxist Studies at Nanjing Normal University. In the article, Wang stressed that the Party’s control over ideology “cannot be loosened for a single moment” and that “strengthening the Party’s sole leadership over work in ideology is an important weapon for the CCP’s success.” The following are excerpts from the article.]

I. Emphasizing the Strategic Importance of Ideology Work and Tightly Controlling Its Direction
Managing ideology work has always been a very important function for our Party. Missteps in managing the economy will cause big problems. Missteps in managing ideology will also cause big problems. Therefore, we should not slacken in our work on ideology while focusing on economic development. Strengthening the Party’s sole leadership over ideology, firmly controlling the direction of that ideology, and strengthening our motivation and foresight are important magic weapons for our continued victories.

1. Establish a central standing organization and strengthen the Party's control over ideology. Back when the Chinese Communist Party was first established in 1921, our Party created a propaganda agency responsible for propaganda and agitation and for promoting revolutionary development. After the Sixth CCP Congress, the Central Propaganda Department became a permanent branch (of the government) and assumed its responsibilities and functions as the supreme organization for propaganda, for the education of the whole country, and for the political thought education of CCP cadres and the general public. In July 1942, Comrade Mao Zedong stressed that "the leadership’s control of thought is the most important leadership control."

II. Responding to Confrontation between Ideologies and Scientifically Controlling the Correct Direction of the Development of Ideology
We must carry out a clear-cut battle between the two opposing ideologies (socialist ideology vs. the capitalist ideology) to provide a powerful guarantee that the direction of our reform and opening-up policy will be correct. Since the reform and opening-up, our Party has attached great importance to the confrontation and struggle between ideologies, actively responded to domestic and overseas challenges, and scientifically led in the development of ideology. Deng Xiaoping stressed that "liberalization itself is bourgeois; there is no such thing as proletarian or socialist liberalization. ... Promoting liberalization will lead us to the capitalist path." This suggested that fighting bourgeois liberalization is a long-term task. … Since the beginning of the 21st century, in responding to some erroneous thoughts and views questioning the current reform and the Party's basic policies, the Central Propaganda Department and other departments have edited “The Six Whys - the Answers to Several Major Issues," "Seven ‘How to Understand,’" and the "Learning Guide on Drawing ‘Four Major Boundaries’" to help cadres and the general public clarify some major issues and consciously resist the infiltration of erroneous ideas.

III. Actively Moving the Development of Ideology Forward with Innovative Styles and Methods
We should use propaganda, education, and scientific indoctrination to enhance the attractiveness and fighting power of Marxism-Leninism. Lenin once pointed out that, in the course of the proletarian revolutionary struggle, "socialist consciousness is something instilled from outside of the proletarian class struggle, rather than spontaneously generated from the struggle itself." Using Lenin's "concept of indoctrination" as our guide, our Party has actively promoted positive education, vigorously disseminated Marxism and the theory of the new democratic revolution, and strongly accelerated the process of democratic revolution.

IV. Consolidating the Social Foundation for Developing Ideology
We need to combine the sole leadership over socialist ideology with the concept of the diversity of cultural development. Since the reform and opening up, the development of social thoughts has been very active, and social consciousness has become diversified. This requires us to handle the relationship between the sole leadership over socialist ideology and the diversity of cultural values.
We should combine the development of socialist ideology with our efforts to expand the opening-up and development of the socialist market economy. Since the reform and opening-up began, we have adhered to the development of socialist ideology. At the same time we also expanded the opening-up and development of the market economy. As a whole, we correctly handled the relationship between the development of ideology and the expansion of the policy of opening-up and developing the socialist market economy. In fact, we prevented the ideology "centralization" and "enforcement" theories, and also paid attention to guarding against the ideology "useless" and "dilution" theories.
In all, since the establishment of the CCP 90 years ago, our experience and history in controlling  ideology tells us that the strategic position and function of managing ideology should not be neglected and that the Party's leadership over ideology cannot be relaxed. We must unswervingly adhere to Marxism as our guide in the field of ideology and scientifically educate and correctly guide the changes in people's moral and value systems.