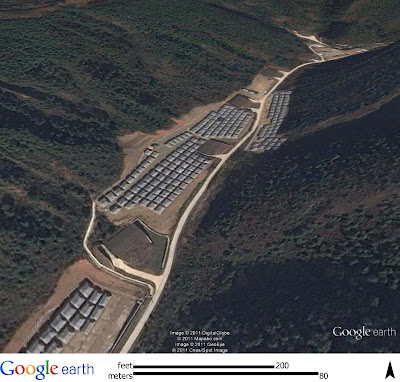 In November, 2001, Craig’s Smith wrote an article in The New Times entitled Mao's Buried Past: A Strange, Subterranean City. Smith described `a network of 10-to-15-feet wide tunnels in Beijing. While Communist China was getting closer to Washington in the early 1970’s, Mao ordered the construction of a 500-bed underground hospital, a 1,000-seat movie theater, classrooms, granaries, a barbershop and even public baths under the Chinese capital.
Smith affirmed that “Beijing's total honeycomb, which took 400,000 people to complete, could reputedly hold a million people and stretched to the Western Hills, behind whose distant outline the city's sun sets each night.”
There was even a four-lane underground roadway between Zhongnanhai, the Communist Party's leadership compound and the Great Hall of the People.
This underground work was meant to counter a supposed Soviet threat. It was in fact sheer paranoia from the Great Helmsman who called the masses to “deeply dig caves, extensively store rice”.
Smith said: “Strategic mountains were riddled like Gruyère.”
A recent article in The Washington Post, based on a new research by Phillip A. Karber, a professor at Georgetown University and his students mentions "thousands of miles of tunnels dug by the Second Artillery Corps, a secretive branch of the Chinese military in charge of protecting and deploying its ballistic missiles and nuclear warheads."
The Post says: “The Chinese have called it their ‘Underground Great Wall’ — a vast network of tunnels designed to hide their country’s increasingly sophisticated missile and nuclear arsenal.”
Karber, a former top Pentagon official, with a few ‘obsessively dedicated’ students worked for three years to translate hundreds of documents, scrutinize commercial satellite imagery and browse gigabytes of online data; they even managed to obtain restricted Chinese military documents
Their research was triggered by the 2008 Sichuan earthquake which killed 87,000 persons: "The chairman of Karber’s committee noticed Chinese news accounts reporting that thousands of radiation technicians were rushing to the region. Then came pictures of strangely collapsed hills and speculation that the caved-in tunnels in the area had held nuclear weapons."
Though not yet released, the study has already prompted a congressional hearing and has been circulated in the Pentagon.
One of the conclusions of the 363-page research paper is that China’s nuclear arsenal could be many times larger than earlier believed. The State-owned CCTV itself reported that China had more than 3,000 miles of tunnels, including underground bases able to withstand nuclear attacks.
What created a controversy is the conclusions of Karber’s team: China’s nuclear warheads could number as many as 3,000.
Hans M. Kristensen, a nuclear expert at the Federation of American Scientists (FAS) reacted immediately on the FAS Strategic Blog. He objected to this figure: “Although we don’t know exactly how many nuclear weapons China has, we are pretty sure that it doesn’t have 3,000. In fact, the Georgetown University estimate appears to be off by an order of magnitude”.
The main problem according to him is that there is no evidence that China has produced enough fissile material to build so many warheads. He pointed to another issue: China does not have delivery vehicles to dispatch such number of warheads on their targets. Kristensen asserted that the number of delivery vehicles gives a more accurate idea of the size of a nuclear arsenal.
For India, the point is not only the size of the Chinese arsenal or the number of nuclear warheads that Beijing possesses, but the fact that thousands of miles of tunnels have been dug, sometimes close to the Indian border, which can also be used to store ‘conventional’ weapons and ammunition.
Analysts often speak of roads, airports and other ‘dual-use’ infrastructure being built in Tibet, with India lagging far behind, but tunnels are rarely taken into consideration.
The digging mania has existed for decades in Tibet. Several years ago, a former senior Tibetan official told me: “When the Chinese dig, they do not allow the local population to come close. All the aspects of military operations are top secret. Very few Tibetan are involved, maybe one or two, when really indispensable. The digging was so secret! All the movements are done at night; never during the day. Large troop movements occurred at night. People could only say: ‘We have heard vehicles moving, it must be the army’, but nobody has not seen them.”
This was already happening in the 1960’s near the Indian border where the intelligence gathering was comparatively easier; one can imagine the difficulty to get a precise idea of what is happening in remote places such as Delingha (Qinghai) where most of the Chinese arsenal is kept.
One wishes that some bright and energetic professors of IIT or other top technology schools in India would take up such a study with their students.
Posted by Claude Arpi at 6:34 AM