Forty year ago: the People's War 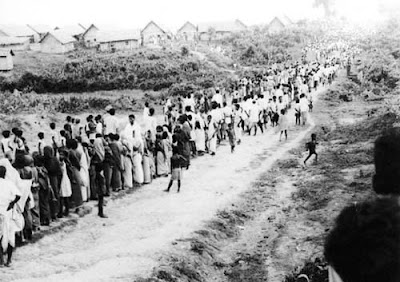 Forty years ago, the Indian Army, Air Force and Navy liberated Bangladesh.
But the Liberation War was not just a military operation, it was truly a People's War.
Number of artists, intellectuals, politicians and others participated in their own way in the liberation of East Pakistan from the joke of the Pakistani tyrants.

Some 40,000 fans attended the Concert and $250,000 was collected and later presented to UNICEF for the war-affected children of Bangladesh.
An album was later produced with the artists who participated in the concert (Bob Dylan, George Harrison, Ravi Shankar, Ustad Allarakha, Ringo Star, Eric Clapton,Don Preston, Leon Russell, etc.).
Let us not forget that at the same time, the Nixon Administration, as allies of Pakistan, was dead against a Bangladesh’s liberation war (tomorrow, I will post on this blog a note on the role of the Nixon administration).


My friend came to me, with sadness in his eyes
He told me that he wanted help
Before his country dies
Although I couldn’t feel the pain, I knew I had to try
Now I’m asking all of you
To help us save some lives
Bangla Desh, Bangla Desh
Where so many people are dying fast
And it sure looks like a mess
I’ve never seen such distress
Now won’t you lend your hand and understand
Relieve the people of Bangla Desh.Bangla Desh, Bangla Desh
Now it may seem so far from where we all are
It’s something we can’t neglect
It’s something I can’t neglect
Now won’t you give some bread to get the starving fed
We’ve got to relieve Bangla Desh
Relieve the people of Bangla Desh

And the students at the university
Asleep at night quite peacefully
The soldiers came and shot them in their beds
And terror took the dorm awakening shrieks of dread
And silent frozen forms and pillows drenched in red..

And the students at the university
Asleep at night quite peacefully
The soldiers came and shot them in their beds
And terror took the dorm awakening shrieks of dread
And silent frozen forms and pillows drenched in red..


Millions of souls nineteen-seventy-one
homeless on Jessore road under grey sun
A million are dead, the million who can
Walk toward Calcutta from East Pakistan

Where are our tears? Who weeps for the pain?
Where can these families go in the rain?
Jessore Road’s children close their big eyes
Where will we sleep when Our Father dies?

How many millions of children die more
before our Good Mothers perceive the Great Lord?
How many good fathers pay tax to rebuild
Armed forces that boast the children they’ve killed? 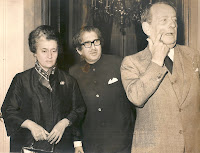 Early 1971, André Malraux, General de Gaulle companion, declared that he was ready to go and fight on the side of Mujibur Rehman's people.
It was the last battle of the author of L'Espoir (Hope).
His participation on the battle field did not materialize, but Malraux visited Dacca in April 1973.
On his arrival he declared: “I kiss poverty on a single face. Since I cannot kiss everybody, I kiss Bangladesh on a single face.”
Addressing the students of Dacca University, Malraux forcefully asserted: “Students of Dacca, I am speaking today, for the first time, in the only university in the world, which has more dead than living students ...All your dead ones had a rendezvous with destiny, but now, it is for you to build the nation.”
He later wrote:
Salutations to you, O dead ones of the forests that surround us!
You have shown the world that an enemy can never assassinate enough to kill the soul of a people which does not surrender!
One biographer wrote: "André Malraux's fight for Bangladesh was an example and symbol, a symbol of his compassion, his love of India, his concern for the human soul."
Posted by Claude Arpi at 6:29 AM