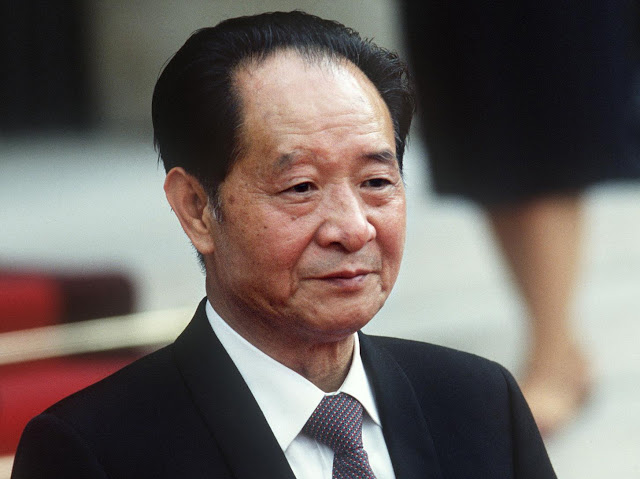 It may sound incredible, but the Chinese Premier praised Hu Yaobang, the disgraced former Secretary General of the Chinese Communist Party.
The most surprising is perhaps that the People's Daily published the article of Wen.
In May 1980, Elder Hu visited Tibet. He is the only Chinese leader to have ever admitted the mistakes committed by the Central leadership on the Roof of the World.
Read the report of Hu's visit to Tibet.


Eyebrows raised at Premier Wen's eulogy for Hu Yaobang
Ng Tze-wei and Josephine Ma
South China Morning Post
Updated on Apr 16, 2010
The People's Daily published an emotional eulogy by Premier Wen Jiabao for late party secretary Hu Yaobang yesterday on the 21st anniversary of the reformist leader's death.
In the surprising eulogy, titled "Recalling Yaobang on my return to Xingyi ", Wen wrote that he modelled himself on the populist Hu and had maintained a close relationship with him after Hu was deposed in 1987.
Hu Yaobang was a mentor to Wen and President Hu Jintao. The eulogy raised eyebrows because it is extremely rare for an incumbent premier to write publicly about a politically sensitive figure at a sensitive time - Hu's death sparked the pro-democracy protests that resulted in the infamous Tiananmen crackdown on June 4, 1989.
All articles by state leaders are carefully choreographed to relay a political message, especially those in the People's Daily, the party's most important mouthpiece.
"This article is unexpected. Since the removal of Hu from his position, which is a tragedy, few dared to speak for him in the media. So Wen's article is a very important gesture, and a good sign," said Bao Tong , secretary to late party general secretary Zhao Ziyang .
In a rare revelation, Wen wrote that he often visited Hu after his resignation and had never stopped paying tribute to him in the past two decades. Hu was toppled by party hardliners who held him accountable for a wave of student-led unrest and the spread of "bourgeois liberalism".
"After comrade Yaobang no longer held official leadership posts in January 1987, I often visited him at his home," Wen wrote. "On April 8, 1989, when comrade Yaobang was critically ill and under emergency treatment, I accompanied him all along.
"On April 15, when he died suddenly, I rushed to the hospital. On December 5, 1990, I carried his funeral urn for burial in Gongqing , Jiangxi , and I've visited his home every Spring Festival since his death."
Political commentator Li Datong, a former editor of the China Youth Daily, said Wen's detailed account of his connection with Hu was unusual and intriguing. "It is as if Wen is telling the public what he has done for Hu all these years. It is as if he wants to leave a historical record on this issue," Li said. "It is like a confession; it is very unusual."
Li said he believed the article was not the result of a political consensus by the Politburo Standing Committee, nor was it a prelude to the full rehabilitation of Hu's political status. Rather, it showed Wen's disappointment and frustration with the bureaucracy.
"Among the Politburo Standing Committee, Wen is in the minority. He always talks about universal values such as freedom and human rights. But none of the others mention them," Li said.
During an online question-and-answer session with internet users in February, Wen said he cherished the opportunity to speak to the public because he knew "there were not many such opportunities left".
Wen said he decided to write the eulogy after he visited Xingyi, Guizhou, on April 3 during an inspection of the southwestern drought.
"When I walked on this land and looked at the mountains and the waters, I could not help recalling the trip when I accompanied comrade Yaobang on an inspection here 24 years ago ... the emotion harboured in my heart rises and falls like the tide, and it cannot be calmed."
Wen also gave a lengthy account of how Hu asked him to lead a team of officials and sneak out at night from the guest house they stayed in to get genuine opinions from rural families.
Since becoming premier in 2003, Wen, now 68, has been famous for changing the routes of his inspections unexpectedly in order to talk to rural families, away from meetings prearranged by local cadres.
"I worked with comrade Yaobang for two years after I was transferred to the general office of the party's Central Committee in October 1985," Wen wrote. "I remember in my heart his teachings in those years, and I dare not become slack about what I learned from his example. His work style has brought immense impact on my work, study and life."
The description of how Hu, at 72, insisted on carrying on with the 1986 inspection tour during the Lunar New Year despite ill-health also has parallels with Wen's trips to the countryside. In the February online chat, Wen said he had not celebrated Lunar New Year with his family for the past eight years.
Hong Kong-based commentator Johnny Lau Yui-siu said he believed Wen's article was not an individual move but came as a result of a party leadership consensus. However, it was too early to speculate if the party wanted to fully rehabilitate Hu.
Lau said Wen's article was more likely a proactive move to assuage rising public anger as the sensitive period leading up to June 4 commemorations usually began on April 15.
"Compared with last year, there are more unstable elements in society this year," Lau said. "The government is very worried that these unstable elements, often social and economic problems, will erupt and become political problems. There is a greater sense of urgency this year."
Copyright © 2010 South China Morning Post Publishers Ltd.
Posted by Claude Arpi at 5:09 PM