The answer, Mr. Hu, is blowin’ in the wind 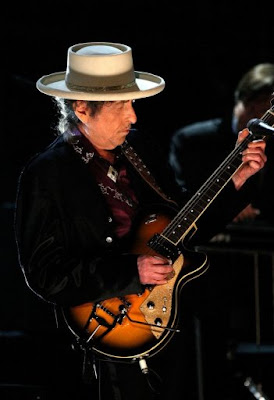 After Google, that is Dylan's turn to be censored.

Come Comrades Politburo members
Please heed the call
Don't stand in the doorway
Don't block up the hall
For he that gets hurt
Will be he who has stalled
There's a battle outside
And it is ragin'
It'll soon shake your windows
And rattle your walls
For the times they are a-changin'.

Bob Dylan cancels Asia tour after Beijing rejection: report
(AFP) – 5 hours ago
HONG KONG — Bob Dylan has cancelled several legs of an Asian tour after Beijing refused to give him permission to perform in China, a newspaper reported Sunday.
Dylan originally planned to play in China, Hong Kong and Taiwan, following his multi-city tour of Japan last month, the Sunday Morning Post said.
Tour organisers, Taiwan-based Brokers Brothers Herald, announced in January that Dylan would be performing in Hong Kong on April 8, but there was little subsequent promotion, the report said.
When permission for dates in Shanghai and Beijing was not granted by the Chinese government, the company pulled the other Asian dates.
"China's Ministry of Culture did not give us permission to stage concerts in Beijing and Shanghai, so we had no alternative but to scrap plans for a Southeast Asian tour," Jeffrey Wu, the promoter's chief of operations, was quoted as saying.
"The chance to play in China was the main attraction for him. When that fell through everything else was called off."
Telephone calls to the ministry by AFP went unanswered on Sunday.
Wu said the ministry had tightened control over foreign singers performing in China since Icelandic star Bjork's pro-Tibet outburst at a Shanghai concert two years ago.
The ministry said Bjork "hurt the feelings of Chinese people" after she chanted "Tibet! Tibet!" when singing her song "Declare Independence."
China has ruled Tibet since sending in troops in 1951 to "liberate" the region. It has grown increasingly wary of pro-Tibetan independence campaigns after protests staged two years ago in the Tibetan capital Lhasa to mark the anniversary of the March 10, 1959 uprising erupted in deadly violence.
Dylan is best known for the politically charged songs of his early career, including "The Times They Are A-Changin'" which is hailed by some critics as the archetypal protest song. His anti-war anthem "Blowin? in the Wind" is still regularly played at peace demonstrations.
Posted by Claude Arpi at 7:04 AM