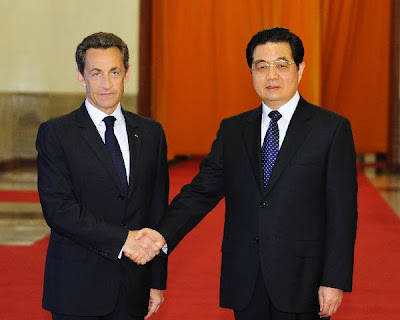 The purpose of President Sarkozy' visit to China (his fourth one) is not very clear. He is probably keen to show the First Lady the Great Wall and the terracotta warriors at the tomb of China's first emperor in Xian.
Interestingly (though not directly connected), The News in Pakistan in an article, The French dis-connection attacks Paris for canceling a large arm deal: "France, true to its traditional double dealing, duplicity and equivocation, put on hold the provision of $1.6 bn contract for provision of JF-17 Thunder aircraft parts."
The commentator speaks about US pressurizing Paris. He says: "any technology provided to support the JF-17 Thunder aircraft fighter might be pirated across to China".
Even without the US 'pressure', Paris is not so confident that the aircrafts to be sold to Pakistan will not go through a 'reverse technology process' in the Middle Kingdom. Though Pakistan obviously does not believe in this scenario as: "China has crossed requisite technological barriers much earlier to be categorised as a dependable supplier of weaponry to the world. The latest demonstrations of China’s newest aircraft, J-10, in front of defence attaches is a testament of its technological ascendancy in the region", it remains however a concern in France. Of course, Hu will not broach the topic with his French counterpart. About a 'new page', one can doubt.

China-France ties "opened a new page" as Sarkozy pays state visit
English.news.cn
Xinhua 2010-04-29
BEIJING, April 28 (Xinhua) -- Chinese President Hu Jintao said Wednesday China-France ties have "opened a new page" as French President Nicolas Sarkozy pays his second state visit to China.
At a joint press conference with Sarkozy in Beijing, Hu told reporters he had accepted Sarkozy's invitation to visit France "at a time convenient for both sides."
Hu and Sarkozy held about 50 minutes of private talks before starting their formal, large-scope talks which Hu described as "candid, friendly and productive" and reaching "many important agreements."
Sarkozy arrived in Xi’an, capital of northwest China's Shaanxi Province, Wednesday morning to begin his three-day state visit.
It is Sarkozy's fourth trip to China and his second state visit as French president. He paid his first state visit to China six months after taking office in May 2007. He attended the opening ceremony of the Beijing Olympic Games and took part in the 7th Asia-Europe Meeting held in Beijing in 2008.

FOUR-POINT PROPOSAL FOR BILATERAL TIES
To further upgrade the China-French comprehensive strategic partnership, Hu made a four-point proposal at his talks with Sarkozy. Hu said China hopes to work with France to maintain high-level exchanges and dialogue and consultations on major issues of common concern.
Hu also suggested both sides boost pragmatic cooperation. He said in addition to cooperation in traditional fields, the two sides should actively promote cooperation in energy saving, environmental protection, new energy, agriculture and farm produce processing, and among small and medium size businesses to seek long-term, stable and reciprocal common development.
The two countries should strengthen cultural exchanges, facilitate language education, two-way travel, and dialogue between each other's media and think tanks, Hu added.
He said China and France are expected to together meet local and global challenges to achieve a peaceful and stable international environment, citing reform of the international financial system, improving the global economic governance structure and coping with climate change.
Hu told the press conference he and Sarkozy agreed to keep in close consultation on global issues and to conduct active cooperation to solve international and regional disputes by peaceful means.
He said the Chinese side sets a high value on the role the EU play in international affairs and appreciates the constructive stance taken by the French side in promoting China-EU relations.
When meeting the press, Hu noted France is the initiator of the reform of the global economic governance mechanism.
Hu added China supports France's holding of next year's G20 summit.
France will hold the presidency of the G20 summit this November and host the 2011 summit.
Sarkozy said France is willing to work closely with China to ensure a successful summit.
He said that China is a very important strategic partner of France and they both need to cooperate closely on major global issues such as pushing economic growth, and maintaining world peace.
He said there is only one China in the world and that Taiwan and Tibet are both part of China. This is the policy France has been adhering to since the France-China diplomatic ties were established in 1964. There is no change in the policy.
He said France is willing to work with China to further beef up cooperation and exchanges in fields including peaceful use of nuclear energy, aviation, transport, environmental protection, finance, agriculture and culture.
After talks with Sarkozy, Hu said he will visit France at the invitation of Sarkozy.
As a guest of Hu, Sarkozy is paying a state visit to China from April 28 to 30. He kicked off the visit in Xi'an, capital of northwest China's Shaanxi Province. He will attend the opening ceremony of the Shanghai World Expo on April 30.
Posted by Claude Arpi at 7:10 AM