Trying to guess why the Karmapa's tour was cancelled 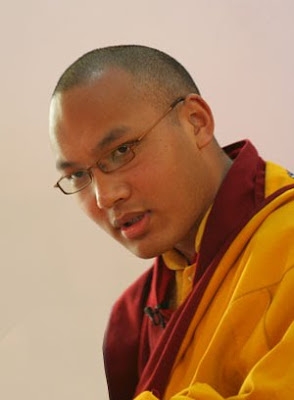 What could be the reason for the Government of India to refuse to clear the European trip of the 17th Gyalwang Karmapa Ogyen Trinley Dorjee? The young Karmapa was scheduled to give a series of teachings in nine European countries from May 27 and July 2, 2010.
On Monday, Ven. Ringu Tulku, the tour coordinator conveyed the ‘sad’ news to the Dharma Centres organizing the event in their respective countries.
The news was rather surprising because the head of the Karma Kagyu tradition of Tibetan Buddhism had been granted permission by the Government of India to visit the United States last year, between May 15 to June 2, 2008.
Everyone remembers how the 15-year old Karmapa, in a Bollywood-type escape reached Dharamsala in January 2001 after crossing the highest Himalayan passes in the midst of winter and the hesitations of the Indian government to grant him refugee status. At that time, many believed that he had been 'planted' by the Chinese to create confusion with the Sikkim issue (Beijing recognized the Indian State as a part of India only two years later).
Finally, several days after his arrival, Kalon Tashi Wangdi, then Minister of Religion and Cultural Affairs in the Central Tibetan Administration, Dharamsala declared: "The Government of India has formally communicated to us that the 17th Gyalwa[ng] Karmapa Ogyen Trinley Dorjee has been granted refugee status in India."
When asked if the Karmapa would be allowed to travel without any restrictions in India, the Minister then stated that the Karmapa would be "allowed to stay in India as any other Tibetan refugee, we have no restrictions imposed by the Indian government."
However, h was not to be ‘any other refugee’, especially after a dispute soon erupted with another Karmapa pretending to the throne of Rumtek monastery, Sikkim.
The previous Karmapa, the Sixteenth of the lineage, was one of the greatest Lamas of his generation. He was a great yogi and a realised being. All those who approached him, whether Tibetan, Indian or Western, were greatly impressed by his profound wisdom and the strength and peace emanating from his being. He was respected by all, but when he passed away in 1981, he left his monastery of Rumtek in Sikkim as well as hundreds of Dharma Centres in India and abroad in the hands of four regents who were supposed to provide spiritual guidance to his followers during his absence.
Unfortunately, when one of the regents, Situ Rinpoche discovered a letter of prediction said to have been written by the old Karmapa prophesying his rebirth in eastern Tibet and giving the time of birth and the name of his parents, a dispute erupted between Situ and another regent, Shamar Rinpoche who did not approve of Ogyen Trinley Dorjee's selection.
This was no ordinary dispute; the two Lamas have been fighting for lives after lives in their successive reincarnations. In fact, Shamar had often been on the wrong side of the fence. It turned so bad that at the end of the eighteenth century, the Tibetan government had to ban the reincarnation of Shamar. He was accused of high treason in a war against the neighbouring Gorkhas. It is only the Sixteenth Karmapa who again re-started the process of recognising the lineage of the Shamar Lama.
In Rumtek, bitterness grew between the regents. It took an ugly turn in 1992-93, when law and order problems occurred on a few occasions and a petition was filed in the Sikkim high court praying for an injunction to stop the recognition of the 17th Karmapa. More infighting was reported from Delhi in 1994 when Shamar enthroned his own Karmapa, Thagye Dorjee who is presently living in Europe.
In the meantime, after conducting the necessary tests, the Dalai Lama gave his seal of approval to Ogyen Dorjee. About the same time, in Beijing, the Chinese leadership who had the boy in their hands, decided to also recognize him as the 17th Karmapa. It was the first time in the history of a Communist regime that a ‘reincarnation’ (they call it Living Buddha’) was officially recognized. Poor Karl Marx must have turned in his grave!
The present Karmapa has the unique privilege to have been acknowledged by both the Communist authorities in Beijing and the Dalai Lama in Dharamsala.

Now what could be the reasons for the Indian Government to refuse to clear the Karmapa’s European tour when he was granted permission to visit the US last year?
One can only guess:

1- I am told that it was due to the current visit of S.M. Krishna, the Minister of External Affairs to China. The Chinese would have put some pressure on the Ministry to cancel the Karmapa’s forthcoming visit. Always avid for scoops, the media has recently projected the Karmapa as the probable successor of the Dalai Lama.
The pressure factor on the Ministry is however doubtful as the Karmapa’s visit was expected to take place some two months after the return of the Minister to South Block. What would Delhi gain out of such gesture of appeasement?
In any case, whether it is Obama, Sarkozy or Krishna, nobody has ever gained anything in appeasing Beijing. Nirupama Rao and her colleagues should know that these gestures bring, at the best, very short-term gains.

2- Perhaps more serious is the fact that from the day the Karmapa arrived incognito in Dharamsala in 2001, many Indian officials have been convinced that he had been ‘planted’ by the Chinese intelligence to create some mischief in India, more particularly in Sikkim.
This belief probably still exists amongst a few officers in the Security agencies, though during the last 9 years, they have had ample occasion to check the ‘genuineness’ of the young lama. This theory however does not explain why last year’s US visit was cleared and not the European one.

3- Another possibility is pressure from the ‘other’ Karmapa’s camp. Dharma Centers are big business in the West and Thagye Dorjee probably considers Europe as his own turf. He is said to live in Germany and to often travel to other European countries.
In the past, the Shamar group has been very well connected with several senior officials in the Indian Government.
Has Shamar pressurized some officials in Delhi to cancel the visit of the Karmapa to Europe? It is very possible. A rumor circulated a couple of years ago that when the present Karmapa visited Shamarpa in Delhi, where he resides, the latter would have proposed a ‘deal’ to the young Karmapa: “You look after India, Thagye Dorjee will look after Europe”. It is probably a gossip (though perhaps with some truth in it, at least from Shamarpa’s idea to ‘share’ the world).
It would therefore be logical for him to have tried to block the Karmapa’s visit to Europe.

4- Another possibility is that the Government would have received the information that some Chinese agents or supporters of Shamarpa’s Karmapa would have infiltrated one or several of the Dharma Centers to be visited by the Karmapa. This type of information, if available with the Government of India, would hopefully be passed on to the host country (or vice-versa, if the host country had information that the life of Karmapa was in danger). In which case, the easiest way was perhaps to cancel the tour.

5- A story has recently circulated that the Chinese leadership was seriously preoccupied by the diplomatic activities of the Dalai Lama and more particularly in two countries, the United States and France as both Presidents, Obama and Sarkozy, have met the Tibetan leader. The rumour said that the PLA Intelligence was ready to dispatch ‘operational’ agents to countries to be visited by the religious leader in order to study the ‘local’ conditions. Their role would be to find the most appropriate country to create mischief. Of course, the news is probably part of the web-gossip mill, but by stretching one’s imagination, one can think that the Karmapa would be an easier target than the Dalai Lama, as he probably does not benefit of the tight State security offered to the Dalai Lama while touring abroad.
For the Chinese, it would be an easy way to get rid of a possible successor to the Tibetan leader at a time when they are betting on their own Panchen Lama, who they recently sent as a delegate to the Chinese People's Political Consultative Conference, to succeed the Dalai Lama.

Of course, all these points are difficulty verifiable, but one hopes that the organizers who have invested a lot of time, money and energy to receive the Karmapa in Europe will be informed of the real reasons behind the cancellation, so that they can find a remedy and get the blessings of this bright young Lama, so much interested in protecting the environment.
Posted by Claude Arpi at 1:29 PM

This situation sounds positively bizarre. The Chinese government appears to have planted a "Karmapa" in India and that's gossip. Sounds like a national security threat.

I can assure you, the security surrounding the visit of the Karmapa to the US was very tight. When His Holiness visited our Dharma center, I saw Indian, Tibetan, US Treasury, and US State Department security---Dirk

The answer can be quite easily be found in the following study issued by Col. KK Repswal « Ethnic transformation in Tibet », College of Defence Management , Hyderabad, nov. 28, 2008 http://cdm.ap.nic.in/dissertations/disshdmc04/ETHNIC%20TRANSFORMATION%20IN%20TIBET.pdf

And for the French speaking people, I recommend to place the two previous in the context of Roger Faligot's "les services ecret chinois"