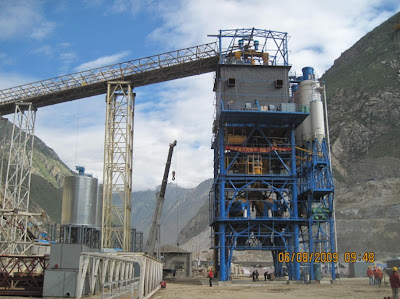 India is an incredible country. The Government says that they have finally got some satellite pictures of the dam being build in Zangmu on the Yarlung Tsangpo (Brahmaputra), while since several months, one can find  pictures of the construction on the Net.
When the Chinese say that the damming (5 dams are being planned, see my earlier posting) will have no consequences for India, most Indian 'experts' agree.
There was recently a talk at the United Service Institution of India in Delhi with the Indian 'Expert' arguing that even if the Brahmaputra is diverted, it will only be a mere 30% of its waters which will be lost to India and Bangladesh, with no consequence for these countries. It is frightening.


In the meantime, Pakistan is laughing.

In October 2009, a discussion was going on about the dams on http://forum.pakistanidefence.com. Here is an extract:

Commenting on:
On Thursday, External Affairs Ministry spokesperson Vishnu Prakash said, in response to a media report, that India will be trying “to ascertain whether there are recent developments that suggest any change in the position conveyed to us by the government of China”.
Checking, still checking....
You can't help but laugh!

Jazba-e-Kashmir
Oct 17 2009, 03:32 AM
if india builds dam and don't give a DAMN about it's neighbour's (Pakistan) water supplies and needs, then why should China care for india then.
What goes around comes around.
Well done by China. 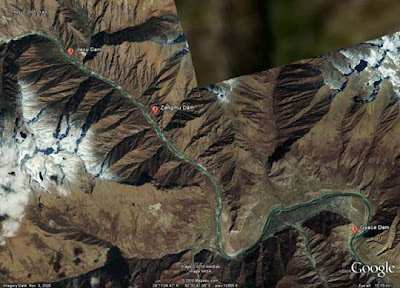 Three of the five dams on the Brahmaputra

Krishna wants us to believe Chinese promise on Tsang Po
23 Apr 2010, 0950 hrs IST,
Economic Times Bureau
NEW DELHI: China has assured India that the dam it is building on the Tsang Po river in Tibet for generating power would not affect the water flow of the Brahmaputra.
External affairs minister S M Krishna told Parliament that China had given this assurance during his recent visit to Beijing to mark 60 years of diplomatic relations between the two countries.
“It is a fact that when we met in Beijing, the question of the power station did come up. The Chinese foreign minister assured me that there would be no water storage at the dam and it would not in any way impact on downstream areas,” Mr Krishna said during question hour in Rajya Sabha.
The minister was responding to a supplementary question from BJP leader Ravi Shankar Prasad on the impact of the Chinese dam. Chinese activity on the Tsang Po river, which is the Brahmaputra in India, has caused a lot of concern in India, particularly in Assam. India and China exchange hydrological data, but have no separate mechanism on dealing with water sharing issues.
However, New Delhi seems to be somewhat reassured by Beijing’s assurance on the dam project considering this is the first time it has even admitted activity on the river.
But, Bharatiya Janata Party (BJP) member Kumar Deepak Das pointed out that the dam is a 450-mw hydroelectric project and could not be labelled a small project. In response, the external affairs minister merely said “with reference to trans-border rivers, we have an expert level mechanism to address the issue. A meeting of experts from both India and China is scheduled to take place from April 26-29 in Delhi and the issue will be discussed in it”.
In spite of the Chinese assurance, India is expected to continue keeping track of China’s activities on the river. The Brahmaputra, which is 2,906-km long, starts in Tibet and weaves through India and then through Bangladesh. The China stretch is 1,625 km, while the next 918 km is in India and the remaining 363 km in Bangladesh.
When asked about the dam project, foreign secretary Nirupama Rao also said that the Chinese side had assured India that the project would not in any way divert water. “This would not a be a project that would divert water... It is not a storage dam for irrigation purposes,” she said on the information given by the Chinese side during the bilateral discussions.
The external affairs minister pointed out that India has concerns about the boundary issue. “There are concerns over the boundary question. It has been our policy that a fair and mutually acceptable solution to this is needed. Our special representative has held 13 meetings with his Chinese counterpart on this and the 14th meeting is scheduled soon,” he said.
Posted by Claude Arpi at 7:16 AM