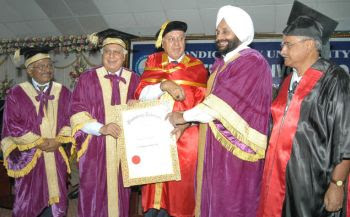 Not only it is 'barbaric' and 'colonial', but they look a bit ridiculous. Don't you find?

Traditional convocation gown 'barbaric': Jairam Ramesh
2010-04-02
Bhopal: Minister of State for Environment Jairam Ramesh on Friday termed the wearing of the traditional convocation robe as a 'barbaric colonial practice' and called for wearing a simple dress instead.
'The practice of wearing a traditional coloured gown during a convocation ceremony at any university was a barbaric colonial practice. Why can't we wear simple dress instead of these gowns?' he observed.
Addressing the seventh convocation ceremony of the Indian Institute of Forest Management (IIFM) here, Ramesh first removed his own gown and then said: 'I fail to understand why we stick to the same colonial practices even after 60 years of independence.'
Posted by Claude Arpi at 9:38 AM