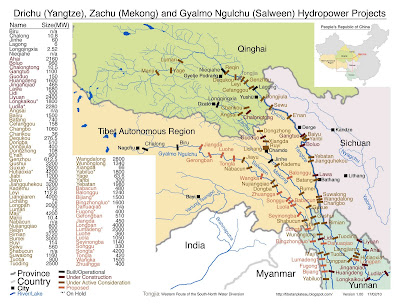 
Pakistan has become hysterical again. This time it is not about Kashmir, Islamabad has found a new issue: water.
According to the Pakistani media (and politicians), New Delhi has started a ‘water war’ against Pakistan, having decided to ‘starve’ the country of its due share of water.
Pakistan’s de facto boss, General Ashfaq Kayani stated that India will remain the main focus of his nation military doctrine so long as the issues of “Kashmir and water were not solved”.
And at the end, there is always a veiled threat: the ‘water war’ may trigger a ‘nuclear war’ if Delhi does not listen to Islamabad and Pakistan’s American sponsors do not immediately ‘restrain’ India.
Dr. Arvind Gupta in an IDSA paper entitled Vicious anti-India propaganda in Pakistan on Water issues lists some of the pearls of wisdom found in the Pakistani press and in the mouth of Pakistani politicians.
For example, on March 3 in Daily Times, a commentator warns: “unless Pakistan was assured on the supply of water, it will never abandon the proxies that can keep India on its toes.” He further added: “For Pakistan the territory of Kashmir may not be as important as the water issue.”
This last comment is the most significant, “Kashmir is not as important as the water issue”. Retrospectively, the motivation of Jinnah for ‘recovering’ Kashmir in 1947-48 was perhaps not the Two-Nation Theory, but the waters of the State which were (and are) an existential issue for the Land of the Pure.
Hafiz Muhammad Saeed, the Lashkar-e-Tayiba founder (and mastermind the 2008 Mumbai attacks) added to the hullabaloo by asserting that the next war between India and Pakistan would be fought over water. Saeed called on the people of Pakistan to stand united against India.
It has been forgotten that since 1960 the Indus Water Treaty has been able to legally deal with all water issues facing India and Pakistan. The ‘water war’ gimmick is only orchestrated by the Army which finds that to keep Pakistan ‘together’, the best way is to point a finger at the ‘eternal’ enemy, India.
However a new element will soon come into play: Climate Change. This is not going to improve the relations between the two neighbours as the water scarcity will soon be real. It does not augur well for the future of the subcontinent.

Not a new issue
The strategic and political implications of climate change are not new. A friend mine, Michel Danino recently sent me his latest book The Lost River: on the Trail of the Sarasvati. His research is a mind-opener on the fate of the mythic river. Taking into account the latest research in fields as different as satellite imagery, archeology, linguistics, paleontology or mythology, Michel says: “The Indian subcontinent was the scene of dramatic upheavals a few thousand years ago. The Northwest region entered an arid phase, and erosion coupled with tectonic events played havoc with river course. One of them disappeared.”
He further explains: “It has been accepted that the loss of the Sarasvati played a role in the dissolution of the Harappan city states. Why did this remarkable civilisation with its excellent town planning, standardised writing and weight system suddenly collapse?” He adds: “Scholars believe that the Sarasvati river system disappeared creating a domino effect on other settlements”.
My point is that climate changes have occurred in the past and will occur again in the future. Though today Pakistan is screaming without factual basis, water wars are looming large on the horizon of the subcontinent. It could bring about tremendous strategic changes in the region.
In view of today’s hysteria of our neighbouring, the past Sarasvati scenario is quite frightening.

A Global Issue
Traditional strategic studies look at national boundaries between Nation-States as the prime triggering factor for most tensions/conflicts. War often originates from ‘historically non-defined’ (or at least not accepted) borders, i.e. Pakistan’s claim over Kashmir or China’s of Aksai Chin or Arunachal, but in the case of climate change the source and consequences are far beyond national borders, making the issues more complicated to grasp and eventually to solve.
The only way to tackle these global issues is through consultation and collaboration; ‘global’ solutions have to be found. In this respect, it is unfortunate that most of India’s neighbours do not understand the meaning of ‘collaboration’.

The Mekong
The strategic issue does not concern India alone. Take the Mekong and the severe draught currently experienced in the Indochinese peninsula. The 4,350 km river has its source on the Tibetan Plateau. It flows downstream to the Yunnan province of China, Myanmar, Laos, Thailand, Cambodia and Vietnam.
Chinese experts assert that Tibet contributes 20% only the Mekong's waters. The remaining 80% are fed from water sources in downstream countries.
Now China has built several dams on the upper reaches of Mekong without consulting its neighbours.
This year, the draught has been so severe that the cargo traffic on the river has stopped, affecting the lives of 65 million people in the peninsula.
Though some environment scientists claim that the lack of rainfall alone is responsible for the low level of the river, a group of affected countries — Myanmar, Laos, Cambodia and Vietnam — met in Thailand to discuss this hot issue.
When Panitan Wattanayagorn, a Thai government spokesman asked Beijing for "more information, more cooperation and more coordination", China immediately denied any wrong doing.
Environmental NGOs in the peninsula however blame China for ‘drying’ the Mekong and provoking the crisis.
China, a dialogue partner of the Commission took the ‘attack’ seriously and sent a delegation led by Vice-Foreign Minister Song Tao to the two-day conference in Thailand.
Liu Ning, the Chinese Vice Minister of Water Resources affirmed that the dams and irrigation projects upstream have actually helped stave off some of the effects of drought and Foreign Ministry spokesperson Qin Gang further stated: "China attaches great importance to developing good-neighbor, friendly and cooperative relations with these countries in its commitment to dialogue, communications and cooperation".
Whatever it is, there is no doubt that climate change is going to provoke similar tensions and conflicts elsewhere in Asia in the future (mainly thanks to the Chinese dams!).

Environmental migrants
Global warming will probably radically change the face of the planet in many ways. A recent report No Place Like Home published by The Environmental Justice Foundation, a UK-based NGO states: “Every year climate change is attributable for the deaths of over 300,000 people, seriously affects a further 325 million people, and causes economic losses of US$125 billion.
Four billion people are vulnerable to the effects of climate change and 500-600 million people – around 10% of the planet’s human population – are at extreme risk.”
Sea rise may be one of the phenomena that the planet will soon witness. It will create tens of millions of ‘environmental migrants’ who are defined as “persons or groups of persons who, for reasons of sudden or progressive changes in the environment that adversely affect their lives or living conditions, are obliged to have to leave their habitual homes, or choose to do so, either temporarily or permanently, and who move either within their territory or abroad.”
Imagine tens of millions of ‘migrants’ having to leave Bangladesh! Where would they go? It is not difficult to guess: to their hospitable neighbor, creating serious disturbances in the North-east. Who is thinking about this in Delhi?

The strategic importance of the Tibetan rivers
For India, there is another serious issue: the diversion of Tibet’s rivers towards China. Beijing’s problem No 1 in the years to come will be how to feed its 1.3 billion people, for which water is needed.
The only solution to save China is to divert the water from the South to North. The water diversion project was already mentioned in The Draft Outline of the Tenth Five-year Plan for National Economic and Social Development (2001 2005). According to the 10th Five-year Plan, water should be diverted from the South via three channels in the eastern, central and western regions, respectively.
For us in South Asia, the main concern is the Eastern Diversion.
The perennial run of the rivers originating from the Tibetan glaciers also results in a stable flow of water to regions which are dominated by monsoon rainfalls (with rain pouring for only a few months of the year). Consequently, the Tibetan rivers, independent of seasonal precipitation patterns, are an important factor in sustaining hydrological regimes of South Asia.
As in the case of the Mekong, the Chinese deny any wrong doing on the Brahmaputra though the work to dam the lifeline of Assam and Bangladesh has started. Last year, the Gezhouba Corporation, one of China's largest engineering companies, was awarded a $167 million contract to build the Zangmu Hydropower project on the Brahmaputra, north of Arunachal Pradesh.
The project is expected to be completed in December 2015. It will be followed by a string of 4 other dams in this sensitive area. While their Pakistani counterparts are vociferous about non-existent ‘water diversion’ in India, the South Block diplomats remain very shy to strongly take the matter with Beijing.
These issues are bound to increase with the melting of the Himalayan glaciers and the climate change on the “Third Pole”, as the Tibetan plateau is also called.
And contrary to the drying of the Sarasvati, this time the catastrophe will be man-made.
Posted by Claude Arpi at 6:14 AM