Visit the McMahon Line by train 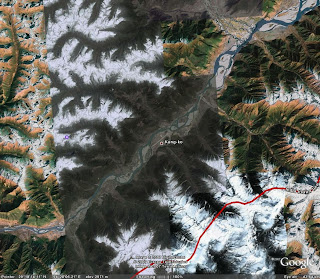 The railway line will follow the Brahmaputra, north of the McMahon Line

In 2013, you will probably still need an Inner Line Permit to visit the Indian side of the McMahon Line, but if you are really keen to visit the area, you will just have to book a train ticket to Nyingchi (Nyingtri) with the Chinese railways.


Lhasa to Nyingchi to be paved with railway
2010-04-14
China Tibet Information Center
by Mirenda
A railway will be paved between Lhasa, capital of Tibet and Nyingchi, at the earliest in 2013.
Project of the Lhasa-Nyingchi Railway is now at the feasibility study stage with two designs going southward and northward under discussion.
The experts prefer the southward scheme since it is relatively easier than the other in terms of difficulty of construction.
The southward scheme suggests building the railway down by the Lhasa River, going eastward through Gongga, passing by Nedong, Nang, Mailing , spanning the Nyang River and ending in Nyingchi County. The total lenght is estimated at 440 kilometers.
The other design with a total length of 330 kilometers proposes to pave the railway along the NO.318 national highway via the Maizhokunggar County, Milar Mountain and Gongbo Gyamda.
Lin Shijin, head of the experts group, the most scientific time to build the Lhasa-Nyingchi Railway is in 2013.
Posted by Claude Arpi at 3:13 PM