The Partition of Tibet 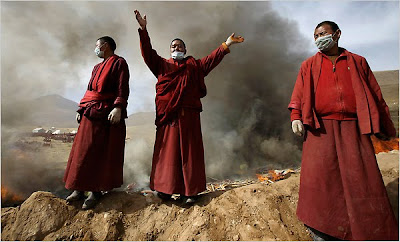 In the 1960's, the PRC partitioned Tibet.
Nearly two third of the Tibetan territory became part of the provinces of Qinghai, Gansu, Sichuan and Yunnan. As a result, only the Tibetan Autonomous Region is today considered as 'Tibet' by Beijing (though places like Jyekundo, the epicenter of the earthquake are known as Tibetan Autonomous Prefectures - Yushu TAP of Qinghai province).
During the first few days after the catastrophe, the foreign media reported about 'an earthquake in China', hardly mentioning that it was in Tibet. The situation was deeply ironic, the earthquake was in China, but the rescuers needed translators (not only in Xining as reported by this article of the People's Daily), but in the spot.
The Chinese authorities will not agree to a visit of the Dalai Lama in Jyekundo, it would be an admission that this part of 'China' is in reality 'Tibet'. It was what the Dalai Lama has constantly been asking during the 'negotiations'.
As I mentioned in an earlier positing, Beijing may soon be forced to admit the 'partition'.

Hospitals in Xining need Tibetan translators urgently
2010-04-18
People's Daily
Thirty-eight injured people from Yushu quake area have arrived in Xining on April 15.
According to Gong Baocaidan, the vice-director of Qinghai People's Hospital, they have already treated 117 patients from Yushu and they are making every effort to vacate another 160 beds for more patients.
When the reporter arrived in the Affiliated Hospital of Qinghai University, a student from Medicine College was waiting outside, hoping he could be a volunteer here.
However, the hospital has indicated they are in dire need of Tibetan language translators.
Posted by Claude Arpi at 5:23 AM