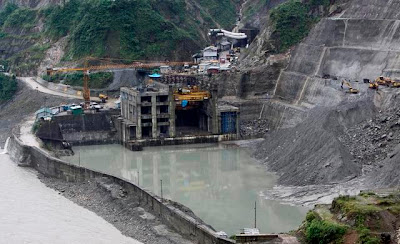 This article in The Hindustan Times makes it clear that 'dam is money'.
To quote from it: "From 2005 to January 2012, the Arunachal Pradesh government collected Rs 1,333 crore for as many as 199 projects as upfront premium and processing fees."
Rs 1,333 crores without doing anything, except promises, that is easy money.
But it is  obvious that today the 'promoters' want 'their money back'.
One of the issues which is not often mentioned is the fact that this 'blue' (or 'gold') rush creates an excuse for the Chinese to build more and more dams on the upper reaches of the Brahmaputra in Tibet, the Yarlung Tsangpo.
They will eventually divert part of the waters of 'their Tibetan' rivers quoting this precedent.
Further, there are the social and cultural implications of building so many dams.
I quote here from a report Damming the Northeast: Juggernaut of hydropower projects threatens social and environmental security of region by Neeraj Vagholikar & Partha J. Das.


With the Northeast identified as India’s ‘future powerhouse’ and at least 168 large hydroelectric projects set to majorly alter the riverscape, large dams are emerging as a major issue of conflict in the region. Although the current scale of dam-related developments far outstrips anything which took place in the past, the region has been no stranger to dam-related conflicts.
For example, the Kaptai dam, built in the Chittagong Hill Tracts of East Pakistan (now Bangladesh) in the 1960s, submerged the traditional homelands of the Hajong and Chakma indigenous communities, and forced them to migrate into parts of Northeast India. Over the years, this has led to serious conflicts between the refugees and local communities in Arunachal Pradesh.
In the 1970s, the Gumti dam in Tripura submerged large tracts of arable land in the Raima Valley and displaced the local tribal population, leading to unrest. Projects such as the Loktak hydroelectric project commissioned in the 1980s have impacted the wetland ecology of the Loktak lake in Manipur, seriously affecting the habitat of the endangered Sangai (the brow-antlered deer) and the livelihoods of local people.
The impending loss of home, land and livelihood has led to many years of opposition to the Pagladiya project in Assam and the Tipaimukh project in Manipur on the Barak river. More recent times have seen major conflicts emerge in Assam and Arunachal Pradesh over the individual and cumulative impacts of over 100 dams planned in upstream Arunachal.
Dam-induced floods from projects such as the 405 MW Ranganadi hydroelectric project in Arunachal and the intense people’s opposition to the under-construction 2,000 MW Lower Subansiri hydroelectric project on the Assam – Arunachal Pradesh border have been major triggers for what has now emerged as a major political debate on the downstream impacts of dams in the region.
Meanwhile, in the uplands of Sikkim and Arunachal, minority indigenous communites such as the Lepchas and Idu Mishmis have expressed concern about the impacts of multiple mega projects in their homelands. The large dams’ juggernaut promises to be the biggest ‘development’ intervention in this ecologically and geologically fragile, seismically active and culturally sensitive region in the coming days.

Let us hope that better sense will prevail over money power.
But it is not often the case in India or in China. 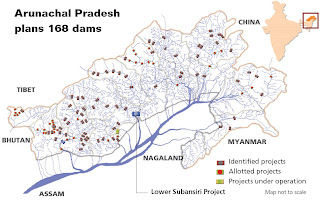 Arunachal dams: Despite issues, govt collected crores
Hindustan Times
Sanjib Kr Baruah,
New Delhi, April 29, 2012
Even as the mandatory public hearing for the massive 2,700MW Lower Siang hydroelectric project in Arunachal Pradesh was postponed in the face of vociferous protests by local tribes, the Arunachal government seems hell-bent on building the controversial network of 168 dams.
From 2005 to January 2012, the Arunachal Pradesh government collected Rs 1,333 crore for as many as 199 projects as upfront premium and processing fees. The amounts were paid by different private companies engaged in building a controversial network of dams in the hilly state.
It also includes fees paid by PSUs like National Hydroelectric Power Corporation (NHPC) by way of advances to the state government against free power, a RTI query has revealed.
'Upfront Premium' means one time non-refundable commitment fee to be paid by the intending power developer which is not part of the project cost.
The network of 168 dams aiming at generation of more than 63,300 MW of power, is reported to being built in brazen disregard for environmental, seismic, socio-economic and cultural issues. In seismic terms, Arunachal Pradesh lies in the Very High Damage Risk Zone, having seen 87 major and minor quakes in 67 years (1929 -1993).
More than 160 memorandums of understanding (MoU) and memorandums of agreement (MoA) have been signed between the Arunachal government and the dam builders.
A clause in one the bipartite MoU copies that is with HT, absolves the dam builders of any responsibility .
The state government is also absolved of all responsibility and accountability in a clause notified in a 2008 Arunachal government gazette.
“The State Government shall not be responsible in any manner for any losses arising out of the force majeure situation such as earthquake, flood, fire, external invasion, civil commotion; landslide etc and no claim on such accounts by the developers shall be entertained by the State Government,” the notification says.