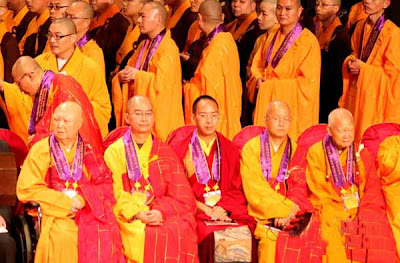 This 'first' interview of the Chinese Panchen Lama is reavealing for several reasons.
First, the visit was organized by the  United Front Work Department.
One remembers that Zhu Weiqun, the Executive Vice Minister of the United Front Work Department of the CPC Central Committee, who has been negotiating with the Dalai Lama's Envoys, recently declared that the Party and its officials should not believe in Religion. As I mentioned in my earlier posting: "The Party should continue to use of its dialectical materialism view of the world and forget about Religion, a poison according to Mao." Unfortunately, they can't forget about Religion.
The same Zhu Weiqun also affirmed a few days before the National Peoples' Conference that the 'nationalities' should be divested of their special privileges to achieve 'national cohesion'.
So why a 'Tibetan' Panchen Lama?
Another remark, the Communist Panchen Lama has been well trained by Beijing to project the Party's views on Religion and Tibet. In this short interview by Tammy Tam of the South China Morning Post, he repeats all the points developed by Xinhua and other Party's mouthpieces.
One often speaks of "One Country, two systems" to define the peculiar situation of Hong Kong, but the fact that nobody protested against the stage-managed Third World Buddhist Forum last week, tends to prove that the former British colony gets now closer to "One Country, One System".
This does not augur well for the Dalai Lama's Middle Path and his quest for 'genuine autonomy'.
'Genuineness' is not something prevalent in Beijing today, simply because the Party is the one and only Boss.
The Panchen Lama speaks of visiting Macao and Taiwan.
Macao (or even Singapore) might be possible, but Taiwan will be more difficult. In Taiwan, his visit which could trigger large scale protests against Beijing's religious policies.

First steps on a long journey
In an exclusive interview on his maiden trip outside the mainland, Beijing's choice as the Panchen Lama, spiritual No 2 of Tibet, explains his mission in life
South China Morning Post
Tammy Tam
April 30, 2012
He is the most protected and the most mysterious person in China. Perhaps we should not even address him as a "person", because to many he is more than that. The Panchen Lama is a reincarnation, a revered spiritual figure, and one of the two highest spiritual leaders of Tibet, together with the Dalai Lama.
Little is known about the 11th Panchen Lama chosen by mainland authorities, and his visit to Hong Kong, where he gave the keynote speech to the Third World Buddhist Forum last Thursday, was the first time he has left the mainland. For that reason and because of the controversy surrounding him as well as the recent events in Tibetan areas, the South China Morning Post asked for an exclusive interview with the person his followers call the Master.
On short notice, I was told he would meet me and my photographer at 9pm on Thursday. I rushed out of the office, jumped into a taxi and headed to his hotel in Wan Chai.
I knew Hong Kong had been carefully chosen as the ideal stop for his first trip outside the mainland, all the more carefully because of the controversy surrounding him and the self-immolation of protesters in Tibetan areas.
The 22-year-old man I was to meet, Gyaincain Norbu, was an ordinary Tibetan boy before being anointed by Beijing in 1995 as the reincarnation of, or the successor to, the 10th Panchen Lama, who died in 1989 after a tumultuous relationship with China's leaders. Beijing says a lot had been drawn from a sacred golden urn in accordance with Tibetan Buddhist rituals.
But the Dalai Lama, in exile, had picked a different boy, Gedhun Choekyi Nyima, and remains in dispute with Beijing about who is the real successor. The Tibetan boy he chose disappeared on the mainland shortly after, aged six.
Norbu - the name means "holy streamer of triumph" - was more fortunate. Away from the world for 16 years, during which he was carefully educated, the boy has emerged to make his first public appearance outside the mainland and his first one-on-one interview with outside media. I was told I had only 15 minutes, due to his tight schedule.
But it would still be a good chance to learn more about him.
When we arrived at the Grand Hyatt, we were escorted to the executive floor. The Beijing official accompanying us, who was introduced as Bureau Chief Zhou from the central ministry of the United Front Work Department, asked us to wait outside while he told the Master of our arrival. I took the chance to double check my questions, making sure we would touch on sensitive questions, such as the recent self-immolation of Tibetan monks.
Zhou said: "As long as the Master is willing to answer, you can ask whatever question you like."
I was surprised to see it was an ordinary suite, not a grand, presidential one. There was the young face I recognised from his occasional appearances on television. He wore his saffron kasaya, the Buddhist robe, and in his hands, which he held in front of his chest, was a string of prayer beads. I wondered whether I should shake hands. Is it true that lamas are not allowed to touch women? But before I could consider, the Panchen Lama extended his right hand, and the three young monks surrounding him smiled and gestured for me to step forward to shake it.
Realising we only had minutes for an interview that I wished would last an hour, I immediately asked: shall we start?