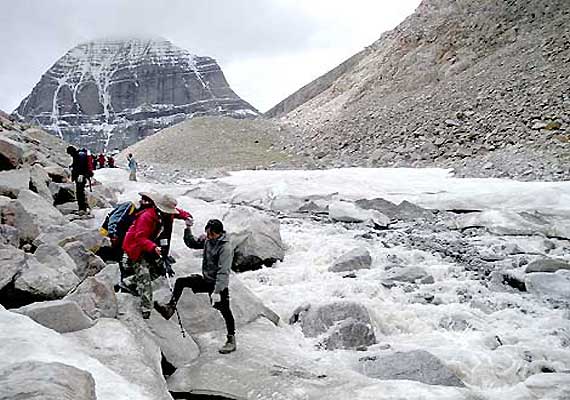 A few days ago, The China Daily reported that last year, some 470,000 pilgrims visited Mount Kailash and Lake Manasarovar, located in today’s Ngari Prefecture of the Tibetan Autonomous Region (TAR).
The article explains that these sites are sacred for the followers of Tibetan Buddhism, the Bon religion, Hinduism and Jainism:


For pilgrims, circling either site is a great honor and the fulfillment of a lifelong desire. Tibetan Buddhists believe that features such as mountains and lakes are living entities and are born in a certain year of the animal zodiac.

As often mentioned on this blog, the Communist regime in Beijing has now developed a great expertise in spiritual matters; for The China Daily:


If a pilgrim circles Kailash in the Year of Horse, the year the mountain is believed to have been born, it is a doubly auspicious act and equal to 12 revolutions in other years. They believe the journey will wash away the sins of one lifetime and bring prosperity.

The TAR government has however decided to implement measures to guarantee the pilgrims' safety, fulfill their religious needs while protecting the environment, says the newspaper.
The figure of 470,000 represents a rise of more than 50 percent from 2013 (some 30,000 pilgrims are said to have come from China's neighboring countries, i.e. Nepal and India).
According to Meng Fanhua, a Chinese pilgrim who recently did the parikrama:


It was so crowded. You could see pilgrims every few meters. People followed the same path, some Tibetans kowtowed, some walked.

Meng believes that his visit to the Holy Mountain is the greatest achievement of his life; it was a two-day walk around the base of Mount Kailash. The 50-year-old painter from Liaoning province said:


It was exhausting physically, but I have never felt better than after that journey. It was truly the greatest adventure of my life - and the most valuable one

Champa Tsultrim, head of the Ngari Prefecture’s Environmental Protection Bureau told China Today that the TAR government has invested 8 million yuan ($1.25 million) to establish some temporary sites for the disposal of garbage and help the travelers protect the environment: “We also increased the number of trashcans alongside Mount Kailash and Lake Manasarovar to guarantee one every 3 to 5 kilometers," he added.


Will it be enough to take care of the solid waste of half a million pilgrims?
It is extremely doubtful. 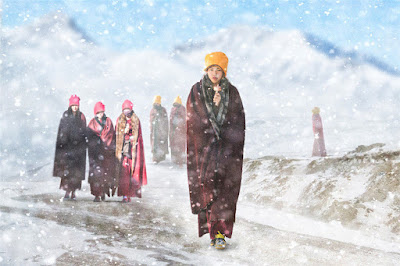 Champa explained that temporary sites are used to store the waste, which is collected every other week and then transported to Purang county, (near the Nepal-India border), some 100 km away from the mountain and 35 km from the lake.
Champa added that to ensure that the environment remains unspoiled, no industrial activity is allowed in the area.
But what about the ‘tourism industry’?
Nyima Phuntsok, head of Ngari's forestry bureau asserted that his office has established a hotline to allow local residents and visitors to report the behavior of pilgrims which pollute (such as dumping garbage or fishing in the lake).
Authorities can also be alerted in case animals are found sick or injured. Callers are accordingly rewarded, said Nyima.
Six monitoring stations on the lake, in some case manned by local residents have established.
Will it be enough?

Manasarovar Ghats?
Finally, the article notes that areas on the lake have been set aside for pilgrims “whose beliefs require them to bathe in the waters, and wardens keep a sharp eye out for anyone using detergents or soap that could damage the ecosystem.”
Will China built concrete ghats on the Sacred Lake?

The Future
One can safely predict that 1 million pilgrims (with a growing percentage of Chinese) will visit the Kailash Manasarovar every year by 2020.
It will be unmanageable.
Will the Holy Mountain remain Holy is the question which should be asked?

Tail-end: Incidentally, the time has perhaps come for Delhi to ask Beijing for the return of Minsar, the Indian territory illegally offered to China in the 1950s.
Posted by Claude Arpi at 10:08 AM