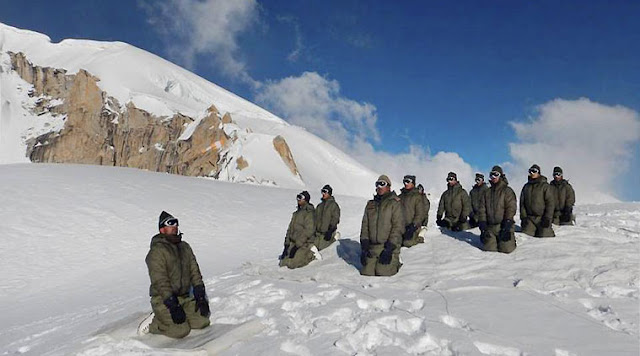 Where wild roses bloom
June, 4, 2005
Once upon a time, a small Yarkandi village stood guarding the entrance of a mighty glacier of the Karakoram range. It was a meeting place for Balti traders to barter their goods with Central Asian merchants.
One day the Yarkandis decided to visit their southern neighbours; they descended from the glacier, but before returning north, they could not resist taking away a beautiful Balti girl. The offense could not remain unpunished; the Yarkandi village had to pay for its crime.
The Baltis contacted a local cleric, who gave them a taweez (amulet) to be placed on summit of the Bilafond-la pass. The villagers were told to strictly follow the priest's instructions and come back via Nubra valley.  However, the Baltis performed only the first part of the ritual. After leaving the taweez on the pass, they did not use the Nubra track to return. Legend says that a terrible storm destroyed the Yarkandi village; only a few stones and wild roses remained.
The priest later explained why the roses did not disappear; his instructions had not been fully followed. Result: Wild roses could still grow in the area. This glacier is known as the Siachen ('Sia' is rose, 'chen' is place)-the place where roses bloom. This is one of the many myths around the area.
But there are also political myths anchored to the 72 km long glacier.
One such legend is that Pakistani troops are occupying the glacier. If you regularly read the Pakistani press, you are informed that Islamabad is ready to "withdraw its troops from the glacier" if New Delhi accepts to reciprocate. According to Islamabad, 'demilitarisation' is the solution. General Pervez
Musharraf has even declared that he finds the issue "actually troublesome for both sides and it is an unnecessary irritant which can be resolved".  But the point is that Pakistan does not occupy the glacier and never did (though it did try in 1983-84). Later in 1984, India took full control of the area as well as most of the peaks of the Saltoro range.
Today, the legend of Pakistan occupying the glacier is even less credible than the Balti girl's story, but the disinformation continues.
The Pakistani President (and his predecessors as well) has been able to spread false propaganda travelling far and wide. Take, for example, a paper published by the Congressional Research Service (CRS) of the US Library of Congress. Titled, 'Pakistan's Domestic Political Developments', which was updated on February 14, 2005.
It shows a map of Pakistan with the entire glacier as occupied by that country. The CRS is supposed to have been created by the US Congress "in order to have its own source of non-partisan, objective analysis and research on all legislative issues".
Indeed, the sole mission of CRS is to serve the United States Congress.
What an objective and non-partisan service indeed!
And of course, nobody in South Block bothers to complain to "our American friends"!
It is necessary to make a quick return to the past to understand the history of the LoC and the glacier.
Following the ceasefire of January 1, 1949, the military representatives of India and Pakistan met in Karachi between July 18 and 27, 1949, under the auspices of the United Nations Commission for India and Pakistan. An agreement was reached and the Line of Ceasefire (today's LoC) was demarcated. The last point on the map was known as 'NJ 9842'.
Nobody thought of going further north at that time. The agreement of July 1949, mentioned therefore that the Line extended "thence north to the glaciers" without going into the details.  The important point which is often forgotten now has been pointed out by General SK Sinha, the Governor of J&K, who participated in the Karachi negotiations as the ADC to General Shrinagesh, the head of the Indian delegation.
Before leaving for Karachi, the delegates had a briefing from Nehru and the Secretary General of the MEA, Sir Girja Shankar Bajpai, who explained the legal position in detail to the delegates. He told them that the resolution of August 1948 "had conceded the legality of Kashmir's accession to India and as such no man's land, if any, should be controlled by India during the period of ceasefire and truce. 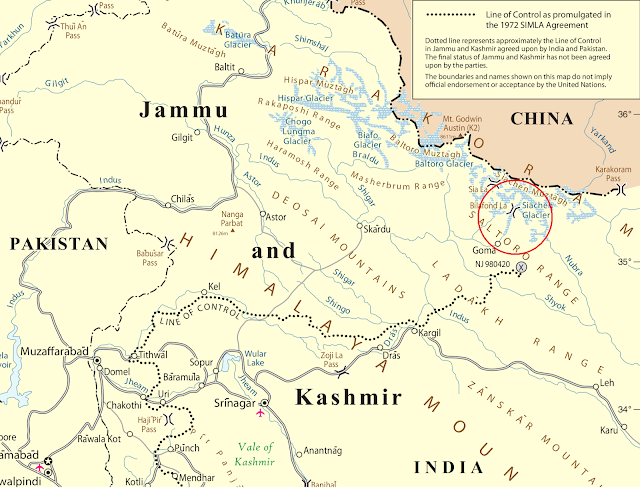 This meant that the onus of proof to convince the commission of any factual position, on the date of ceasefire, in any disputed territory, rested with Pakistan.  "In the absence of any such convincing proof, and even if India had no troops on the date of ceasefire in that area, the disputed territory should automatically come under Indian control.
This convincing and legalistic argument proved a trump card in our hands at Karachi. Based on this, we obtained control of several hundred square miles of State territory where we were not in position on the date of the ceasefire."
This position was then accepted by Pakistan and the UN. It remains valid today. Even if not demarcated, the glacier legally belongs to India. More, the area (including the Saltoro range) has been in the physical possession of the Indian troops since in 1984.
In the early '80s, Islamabad had tried to occupy the glacier under the cover of mountaineering expeditions, but the Indian Army intervened in time and took control.
This was the beginning of the conflict. What disturbs me most is seeing the Indian press biting the Pakistani propaganda bait. Take, for example, a reputed national weekly which regularly publishes the map of Jammu & Kashmir with a different colour for the Siachen as if the glacier is were disputed.
After the recent dialogue on Siachen between the defence secretaries of India and Pakistan which concluded without any agreement, many newspapers spoke of "failure of the talks". Does it mean that a unilateral withdrawal from the glacier would have been a "success"? General Musharraf likes to quote the Fifth Round of talks in 1989: "Yes, indeed there was an agreement in 1989. And that Agreement was based on reallocation of the Siachen." This is far from true. The negotiations saw a hardening of the position of the Pakistan military and, finally, the talks broke down.
However, a communique was issued stating that "both sides would work towards a comprehensive settlement" in future talks. It was conveniently interpreted in Pakistan as meaning that India would unilaterally withdraw from the glacier. India's position has always been clear: Delhi is ready to concede a redeployment zone for the sake of a compromise; but, as General VR Raghavan who has been involved in the earlier negotiations, wrote: "First, each side should acknowledge its current position before a disengagement commences. Second, there should be a high level of assurance that neither side would breach the agreed formula." 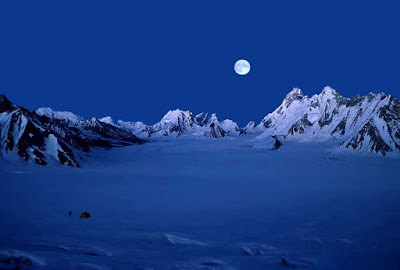 This would require mutual verification and surveillance. It is what General JJ Singh, the Chief of the Army Staff, reiterated when he asked Pakistan to accept the Actual Ground Position Line (AGPL) along the 72 km long glacier before even talking of 'redeployment'. But Pakistan today, like 15 years ago, is not ready to admit that its troops are not positioned on the glacier. This is the reason why it refuses to acknowledge the AGPL.
The Indian negotiators, who have managed to remain "on their ground position" while agreeing to keep the ceasefire and "continue talks in the future", deserve to be complimented.
It is true that the Pakistani intrusions in Kargil ordered by General Pervez Musharraf in 1999 have helped New Delhi to better understand the mind of Pakistani leaders.
To kidnap a beautiful girl is easy, it is not quite as easy to get her back home.
Posted by Claude Arpi at 7:00 PM