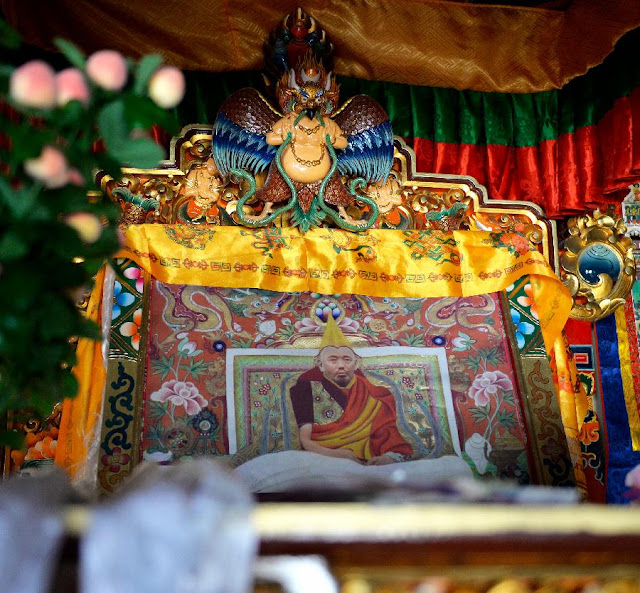 A few days ago, I wrote ‘China loves Tibet’.
In fact, the Chinese government seems more and more enamoured of the Tibetan Culture.
It is difficult to say if it is genuine or just ‘promotion’ to bring more tourists on the plateau.
Probably the latter.
China Tibet Online reports that a Tibetan opera troupe from Gannan Tibetan Autonomous Prefecture (Kan-lho in Tibetan) in Gansu province received a ‘special award’ at the Gansu Provincial Theater Show in Lanzhou.
The opera relates the exploits (and ‘spiritual’ journey) of Thangtong Gyalpo, the great Tibetan saint, scholar, bridge constructor, doctor and founder of the Tibetan Opera.
China Tibet Online affirms that the Opera demonstrates “the historical progress of human civilization on the Qinghai-Tibet Plateau and reflects on the historical unity between Tibetans and Han ethnic groups in China.”
Well, this is propaganda!
The Gansu Tibetan Opera Troup took 3 years to prepare the performance on Thangtong Gyalpo, “adopting modern stage lighting, the play’s artistry has reached a high standard,” says the article.
China Tibet Online says that it was “the largest and most professional show held in the (Gansu) province.”
Supported by the National Endowment for the Arts, the troupe won several awards at the Fourth China Drama Festival in October, including awards for best screenwriter, stage manager and costumes.
Several times on this blog, I mentioned that China had started to promote Tibetan culture …with Chinese characteristics.
A few more examples…

Gedun Choephel, the Revolutionary
In 2013, China Tibet Online reported: "A museum in commemoration of Gedun Chophel [Choephel], a Tibetan humanism pioneer and scholar, is expected to be completed in Lhasa in July, 2013."
The Chinese website commented: "With a strong Tibetan flavor, the Gedun Chophel Museum is part of the Lhasa old town's protection project, covering an area of 1,269 square meters and consisting of three stories."
According to the Communist publication: "Gedun Chophel pursued truth, upheld humanist spirit, turned his conception of history from Buddhist theology to humanism, and made important contribution to Tibetan modern academic and intellectual history."
But there was another side to the coin.
He was a staunched nationalist who would have fought the Communists, if he not left this word a few weeks after the arrival of the Chinese troops in Lhasa in 1951.
While the official media was praising Gedun, Radio Free Asia (RFA) reported: "Authorities in western China’s Sichuan province have blocked plans by Tibetans to observe the 100th anniversary of the birth of famed Tibetan writer and thinker Gedun Choephel, as Beijing continues to crack down on public assertions of Tibetan cultural and national identity".
The gathering had been organized to discuss Choephel’s life and influence on August 24 in Ngaba town (in Chinese, Aba) of Ngaba Tibetan Autonomous Prefecture (Sichuan province).
RFA then explained: "The action came despite recent moves by Beijing to present Gedun Choephel to Tibetans as a 'progressive' figure in modern Tibetan culture." When the Communist authorities learned of the plan, the organizers were told they could not have the event.
Incidentally, apart from the Museum in Lhasa, there is also a Gedun Choephel Gallery of Modern Art on the Bakhor, near the Jokhang cathedral in the centre of the Tibetan capital. 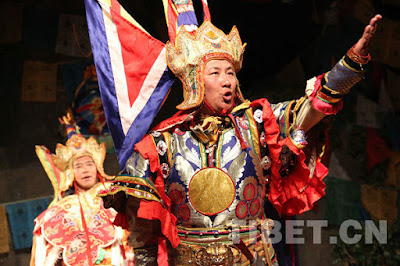 The Epic of Gesar of Ling
For the purpose of making Tibet as a tourist attraction, Beijing has decided to promote the Roof of the World’s ancient culture; Ling Gesar has been one the Chinese favorite targets for this exercise.
An article published by Xinhua in 2013 quoted one Jampel Gyatso, a Tibetologist and director of the King Gesar Research Center at the Chinese Academy of Social Sciences. Gyatso asserted that China knew of the epic since centuries: “Research on King Gesar, the world longest epic, began in the Ming Dynasty, about 200 years earlier than aboard.”
The ‘old’ links between the Tibetan Epic and the Middle Kingdom were highlighted. The Chinese News Agency said that Jampel Gyatso's words have overturned a long-term old view of some foreign scholars that study on King Gesar first began abroad.
China admited the depth and age of the Tibetan culture: “King Gesar, the world's longest epic, is a ballad about a half-human, half-god Tibetan king in the 11th Century who conquered the devils of other tribes and sought to help ordinary people. With more than 120 episodes, King Gesar is considered the crowning masterpiece of Tibetan folk literature.”
Beijing also took pride that in 2009, Gesar was inscribed into the intangible cultural heritage list of UNESCO.
The story of the legendary King apparently did not collide with the Communist ideology of the leadership in Beijing; so, why not using it.
Xinhua thus described the Epic: “Born in the Tibetan Plateau, the great epic tells the story of how the Tibetan hero, King Gesar, subdues demons and monsters and brings benefits to local Tibetans. Reputed as the ‘Oriental Homer's Epic’, the existing collected and sorted King Gesar has reached over 15 million words, the longest in the world.”
In November 2013, the Chinese media announced: “Renowned god-taught ballad singers performed story-telling of King Gesar in Lhasa …in a move to bring the ancient Tibetan art closer to local residents.”
Reading the article one has the impression that the Tibetans had never heard of Gesar before, though it is certainly new for the Chinese tourists.

China loves some Dalai Lamas too
The 2015 White Paper of Tibet asked the Dalai Lama to ‘put aside his illusions’ about talks on Tibet's future. The Tibetan leader is accused of insincerity and of trying to get independence, through the back door, i.e. the Middle Way approach. For Beijing, the Dalai Lama has little understanding of modern Tibet, but keeps ‘a sentimental attachment to the old theocratic feudal serfdom’.
The White Paper further argues: “The only sensible alternative is for the Dalai Lama and his supporters to accept that Tibet has been part of China since antiquity, to abandon their goals of dividing China and seeking independence for Tibet. …The central government [Beijing] hopes that the Dalai Lama will put aside his illusions in his remaining years and face up to reality.”
You may deduct from the above that Beijing has a problem with the Dalai Lamas.
It is not the case.
A Chinese official website, VTIBET.com recently reported the renovation of the birth place of the 13th Dalai Lama: “Tronkhang village, [in] Nang County of Nyingchi Prefecture is the birthplace of the great Thirteenth Dalai Lama, Thubten Gyatso,” says the site. The Tibetan leader is even called, with reverence by Beijing, the ‘Great 13th Dalai Lama’.
The Communist website explained: “The place was formerly known as Nangdui village. However it was renamed Tronkhang (the birthplace in Tibetan language) village because the Thirteenth Dalai Lama was born in this village. His family became powerful Tibetan noble from ordinary people, and constructed Tronkhang manor during 1880 to 1883.”
It appeared that the Tibetan ‘local’ government invested some than 7.15 million yuan (1.2 million dollars) “in overall renovation to the manor for returning to its original appearance.”
Started in September, 2012, the renovation work was completed in September, 2013 and of course, it is opened to Chinese and foreign tourists.
Business is business even with the Dalai Lamas.
The fact that the 13th Dalai Lama fought all his life to make Tibet an independent country is ignored/forgotten by Beijing.
But there is more amazing!
In 2014, China Tibet Online had announced that the former residence of Tsangyang Gyatso, the 6th Dalai Lama, “has been approved to be part of Tibet's historical and cultural site under government protection.”
According to chinanews.com, it was important to study the life story of Tsangyang Gyatso. Why?
It is easy to understand: Tsangyang Gyatso was born in India in Tawang district of Arunachal Pradesh, today claimed by Beijing.
The Chinese website told its Chinese readers: “Tsangyang Gyatso is a famous poet in Tibetan history besides his religious and political identity, having composed dozens of vintage poems.”
Historically it is not correct to say that “Tsangyang's former residence is located in Tsona county, Lhoka prefecture.”
The 6th Dalai Lama’s residence is located in Urgyeling, south of Tawang; he temporarily stayed in Tsona on his way to Lhasa.
The 6th Dalai Lama had an independent mind, as you can see from this old article.
Beijing seems to have developed a liking for the past Dalai Lamas, but not the present one.
It isn't strange!

Chinese celebrities and Dharamsala
A Beijing-based government’s website recently criticized Chinese celebrities who are seen at a Buddhist functions with members of the Tibetan government-in-exile.
Tibet.cn reported that Singer Faye Wong, Hong Kong actor, Tony Leung Chiu-wai and mainland actor Hu Jun were photographed at the gathering in India with some Tibetan exiled leaders.
A commentary on the website said many Western film stars had been criticized for their support for the Dalai Lama and Chinese celebrities should have learned the lesson.
“Why do Faye Wong and Tony Leung still sit together with them knowing they are the heads of separatist forces? What on earth are they doing?” the article asked.
Beijing remains very selective in its choice of 'promotion of Tibetan culture’.

Tail end
As I had just posted this, I came across an news article in China Tibet Online. It asserts: "There are currently over 4000 cultural enterprises in Tibet, and their contributions to its economy are becoming increasingly prominent"
The report explains further the Chinese rationale: "Tibet is an important place for cultural preservation of the Chinese nation, and its cultural industry has a huge potential for development."
The piece cites one Kangchen, director of Tibet Autonomous Region Cultural Affairs Bureau, who affirms that between 2010 and 2014 Tibet’s cultural industry has expanded at an average annual rate of 20 percent on a year to year basis: "Tibet’s cultural industry attracted investment of 570 million yuan and had an annual output of 2.7 billion yuan, accounting for 2. 8 percent of Tibet’s GDP."
According to the outline of Tibet's 13th Five-Year Plan”(2016-2020), Tibet will "vigorously develop the cultural industry and promote integrated development of the cultural industry with tourism, sports, construction, ethnic handicraft and other areas."
China is bound to love more and more Tibetan culture ...as it is important for the cultural preservation of the Chinese nation.
Posted by Claude Arpi at 6:32 AM