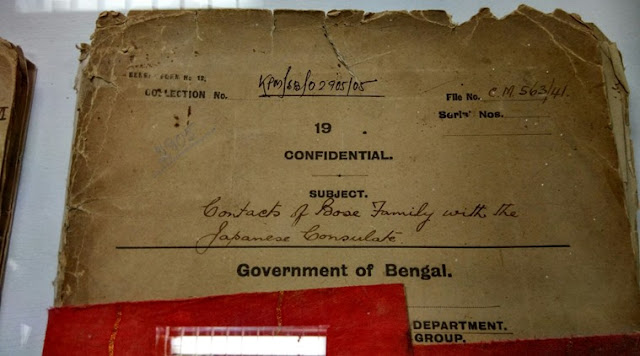 Millions in India awaited with anticipation the birth anniversary of Netaji Subhash Chandra Bose on January 23, hoping that the Prime Minister’s promise to declassified 100 ‘top secret’ files would throw some new light on Bose’s death and why not a major revelation.
Unfortunately, or fortunately, there was no scoop. The 17,000 pages contained in the 100 files released by the Prime Minister, were later posted on the website of the National Archives of India (NAI) where one can access them; this included 36 files from the PMO, 18 files from Home Ministry and 46 files from MEA, covering the period between 1956 and 2013.
A note dated 1995, confirmed that Netaji was killed in an air crash in Taiwan: “There seems to be no scope for doubt that he died in the air crash of 18th August 1945 at Taihoku. Government of India has already accepted this position. There is no evidence whatsoever to the contrary,” wrote the then home secretary K Padmanabaiah on February 6, 1995; the bureaucrat added: “If a few individuals/organizations have a different view, they seem to be more guided by sentimentality rather than by any rational consideration.”
The real ‘revelation’, which passed unnoticed to the news channels, was that the ‘top secret’ files, so jealously kept in the vault of South or North Blocks, contained nothing new which could endanger the ‘security of India’; nothing to jeopardize India’s foreign relations; nothing which could have forced Russia or Japan to break their diplomatic relations with Delhi.
This was however the pretext given for decades to not disclose the content of the ‘secret files’ to the general public. What a joke, a sad one!
Despite the fact that in 2005, the Right to Information Act was passed with fanfare by the Indian Parliament, the politicians and babus (let us call them ‘P&B’) have systematically refused to declassify archival material concerning India’s post-independence history.
It is true that some loopholes in the law help those who do not want India’s history to be known: Article 8 (1) (a) says: “There shall be no obligation to give any citizen, information, disclosure of which would prejudicially affect the sovereignty and integrity of India, the security, strategic, scientific or economic interests of the State, relation with foreign State or lead to incitement of an offence.”
This paragraph, interpreted by the P&B, who have confiscated India’s history, is enough to makes all the files of the Ministries of External Affairs, Defence or Home inaccessible to the public.
P&B hide behind another law, The Public Record Rules, 1997, according to which all documents older than 25 years need to be declassified; records that are 25 years or more must be preserved in the NAI and no records can be destroyed without being recorded or reviewed. Legally, it's mandatory for each department to prepare a half-yearly report on reviewing and weeding of records and submit it to the NAI. The rules also stipulate that no public records which are more than 25 years old can be destroyed by any agency unless it is appraised. This is valid for all the ministries, including Ministry of External Affairs.
The P&B are however a clever lot, they know how to circumvent the law (they have drafted it after all); every 6 months, they give a ‘bulk exemption’ for lakhs of files at a time and that’s it.
One of the most glaring (and foolish) examples of this outdated policy is the Henderson Brooks Report.
A few weeks after the debacle of October-November 1962, General J.N. Chaudhuri, the Chief of Army Staff, constituted a committee to study the causes of the 'Himalayan Blunder’. An Anglo-Indian general named Henderson Brooks (along with Brigadier P.S. Bhagat) was requested to go through the official records and prepare a report on the war. Sometime in 1963, the general presented his findings to Nehru. The report was immediately classified as 'Top Secret.'
One can understand that at the time the Prime Minister did not want the report to be made public, as he might have had to take responsibility for the unpreparedness of the army, but the tragedy is that this report, classified ‘Top Secret’ in 1963, continues to remain so today …though it is available on the Net.
P&Bs like to speak about India’s security and jeopardizing ‘national interest’, but how long can this pretext be used to block the declassification process?
According to The Times of India, Sudershan Rao, the chairperson of the Indian Council of Historical Research (ICHR) recently suggested having a band of 'barefoot historians' to educate ordinary folk on the country's history; Rao wants that common historical knowledge reaches the doorstep of every citizen and ‘breaks out of the matrix of western and Marxist historians’. This is fine, but ‘booted’ historians should also be allowed to access ‘Indian’ records; today, they have to run to London, Moscow or Washington to learn about to know the history of Modern India as the Indian archives are classified.
It is time for a proper declassification policy to be announced; the work should not be done in an ad hoc way, but in a professional manner by trained personnel in a defined time-frame.
The present string of antiquated rules and regulations, red-tapism, as well as obscurantist mind-sets, do not help projecting the image of India as a modern nation and a world leader.
India needs to become smart in the domain of historical research too; the declassification of Bose’s files has shown that it is possible.